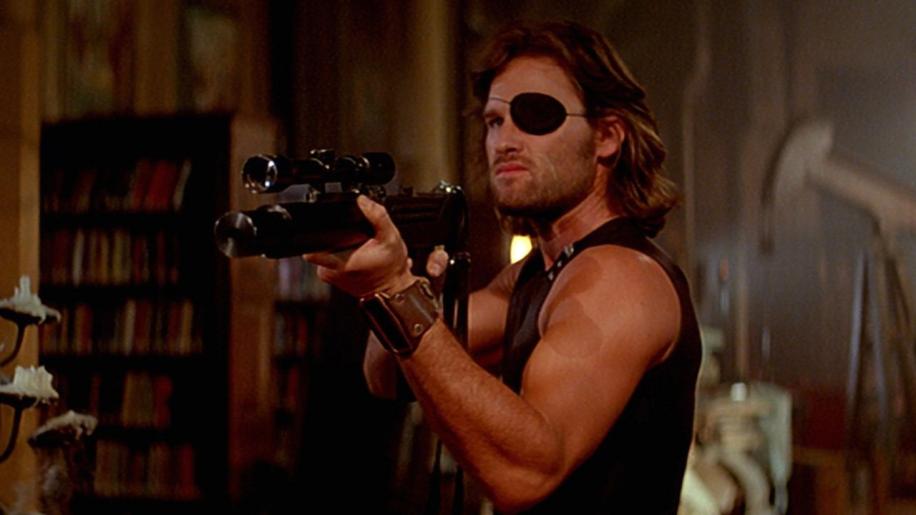 Golly gosh, for a film this old this looks superb. Obviously it doesn't hold its own against transfers of modern films, but it was never going to was it? In terms of what we can realistically expect from a low budget film made a quarter of a century ago, this is virtually flawless. Presented in correct 2.35:1 aspect, and anamorphically enhanced, this is a very visually pleasing transfer. If we were to nit pick, there is obviously some grain, occasional (but very minor) print damage, and light edge enhancement in some scenes. The positives far outweigh the negatives though. Blacks are rock solid (which in a film this dark is a blessing), and colours are vivid and even. Obviously given the minimum light style shooting of the film, there are a few extremely dark scenes which potentially may give some viewers difficulty, but I can't say I experienced any issues with clarity of scene. This looks to be the same source transfer as the R1 Special Edition. If you are pedantic over NTSC and PAL this may be an issue in purchase. Personally I'm not, and either disc does the job admirably in my opinion. Probably about as good as it gets for this film for the foreseeable future.

Two audio tracks (both remixes) are offered here, a 5.1 DTS track, and a Dolby Digital 5.1 one. The same rule of thumb as the picture applies here. For certain this is not going to compete with a genuine modern surround experience. But as far as it goes, for remixes from an old audio source such as this, I can have no complaints. Of course it's not going to win any awards, and it certainly isn't the be-all and end-all audio track to try and use to impress your friends with your new system. The audio on both tracks is predominantly frontal based, but it tries hard to bring the rears into play onto occasion, and there is a relatively impressive attempt to offer an encompassing directionality to the effects. Audio is clear at all times, and the tracks do work hard to offer some oomph to the proceedings. The DTS track is the victor here, offering a marginally richer sound, and an exclusive to the R2, as it is not present on the original R1 disc. Not the greatest of soundtracks, but an A for effort and as good as I could have hoped for in all fairness given the limitation of the source material.

There is a cracking selection of additional features here on this special edition. First up there are two audio commentaries, one from Carpenter and Russell, and a second from the late producer Debra Hill and production designer Joe Alves. Carpenter and Russell are always good value when teamed together and this is no exception. This really is a superb commentary, loaded with interesting facts and anecdotes yet with a genial tone that never lets the proceedings get boring. Hill and Alves provide no less an informative track, however some of the zany humour Carpenter and Russell bring to the table is lost, and the resulting track is a little more technical, a little less entertaining. 'Return to Escape from New York' is a featurette running at just over 20mins in length. This is no PR fluff, but instead is an engrossing and enlightening piece which features extensive interviews with principal filmmakers and stars of the movie, such as Carpenter, Hill, Russell and Hayes amongst others. A worthwhile and informative extra. Next up is the movies initial opening, here presented as a deleted scene. This details the failed back robbery that got Snake arrested in the first place. Running at 10ms in length this is a great little curio for fans of the film. Overall it was probably wise to exorcise it from the final cut (it's unnecessary for the story and would severely impede on the running time), but it's still entertaining as hell and well worth a watch. Finally, three trailers are supplied. The theatrical trailer, the promo trailer, and most curious of all the 'Snake Bites' trailer. This is a bizarre 4-minte rundown of the plot to accompanying synth music. Not sure what this was meant to accomplish, apart from ruin the story if you are unlucky enough to watch it prior to the film. Overall, this is a great and comprehensive selection of extras and comes highly recommended. One possible note to consider however is that this is not strictly a straight port from the R1 special edition. Although the meat of the extras remain intact, it is worth noticing that, in streamlining the R1's two discs into a single disc release, some minor extras have been lost in transit. Gone is the Carpenter/Russell audio commentary that accompanied the deleted scene. Also failing to make the cut is a photo gallery, and a making of which deals with the Snake Plissken comic book franchise.

An essential purchase for Carpenter fans or nostalgic action addicts, Momentum have provided a quality release for the R2 market which the film so richly deserves.