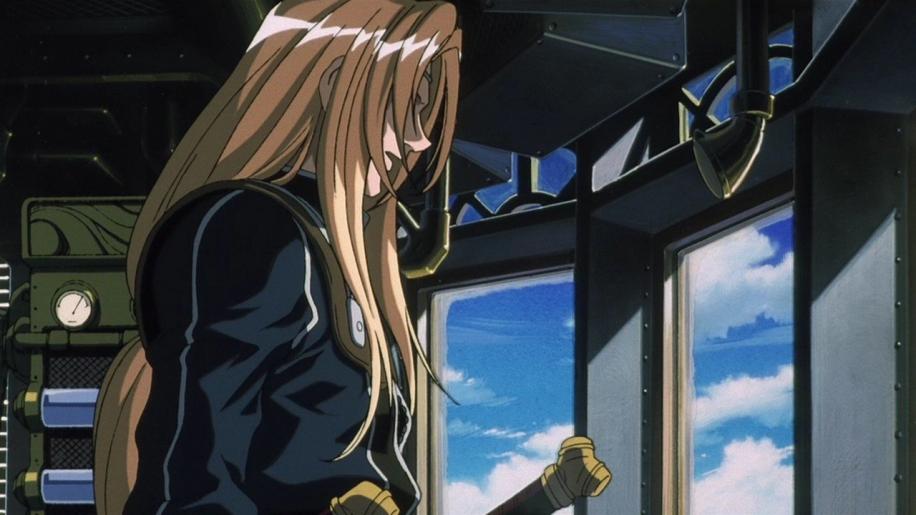 Framed at 1.85:1 and anamorphically enhanced the image here is in my estimation worthy of average status. Colours are well rendered, being rich and bright, and the detail available is reasonable for an anime title. Some print damage, by way of scratches and flecks, is apparent throughout the movie, but any flaws are small and this is a minor issue. Perhaps of more note is the amount of video noise, which seems to be ever-present here. Again, it's never overly intrusive, but it does detract slightly and deserves to be marked down accordingly.

As for the animation itself - I found it a little “wooden”, but there are some nice touches... I do like the, infrequent, use of blurring of foreground images, which enhances the feel of three-dimensionality. At the end of the day Escaflowne The Movie is a little too “old school” looking for my taste. Ah, now we're getting there! This is not an easy movie to follow - even when watching with the English language Dolby Digital (448Kbps) track thumping away, which is a shame as the DTS (768 Kbps) offering is a bit of a blinder, but is available in Japanese only. With subtitles on I really struggled at times to follow the storyline and I found myself regularly having to change back to the English track. In fact sometimes I watched with the English DD 5.1 and English subtitles turned on!As far as dynamics go, well this is one time when DTS wins hands down - at least when comparing English Dolby Digital and Japanese DTS soundtracks. The DTS version is much more spacious, more vibrant and definitely a good few decibels louder, with the centre channel in particular having more detailed and forthright vocals. Are there any differences in the bass department, then, I hear you ask? Oh, yes - indeed there are! Rarely has my sub rejoiced so whilst playing such tight, powerful bass.

Although this is one time when DTS easily outperforms its Dolby counterpart, it is only half the story. I have been comparing the English Dolby track with the Japanese DTS track - switching to Japanese Dolby Digital audio showed that this, too, is superior to the English equivalent! Nothing is ever as straightforward as it first appears! Disc one has the main feature as well as trailers for three other anime titles and a storyboard feature accessible during the movie by pressing the Language button on your remote control, or by choosing it from the menu proper. This brings up the storyboard images in the bottom right corner of the screen.

Disc two has the bulk of supplemental material starting with Staff and Cast Interviews which includes individual interviews with Director Kazuki Akane, Animation Director Nobuteru Uki and Producer Masuo Ueda. The interviews continue with three of the voice stars - Tomokazu Seki(Van Fanel), Maaya Sakamoto(Hitomi Kanzaki) and Shinichiro Miki (Allen Shezar)being interviewed together in a TV piece, split into three segments. Escaflowne event interviews includes, as the title suggests, even more interviews: all interviews have burnt in English and Japanese subtitles. Next of interest is the Anime Expo premiere footage - which includes footage of the premiere of the movie, an introduction to the movie by Minoru Takanashi and post movie panel highlights. Next up is Production Art Gallery with some fine drawings of Characters and weapons, Mechanical designs and, finally, Settings and vehicles. Also included is a Movie poster image gallery.

Disc three is a CD of the movie's soundtrack and I found it surprisingly listenable - not something I would get down and boogie to, but I could lay back and get all mellow without a shadow of doubt! Personally speaking, I thought the movie was lacking - but I'm sure many people will love it. This Ultimate Edition is just about worthy of the title, with great packaging, a fantastic music CD and a Japanese DTS soundtrack to give your system a real workout I think I can justifiably suggest a “recommended” sticker, especially for fans of anime.