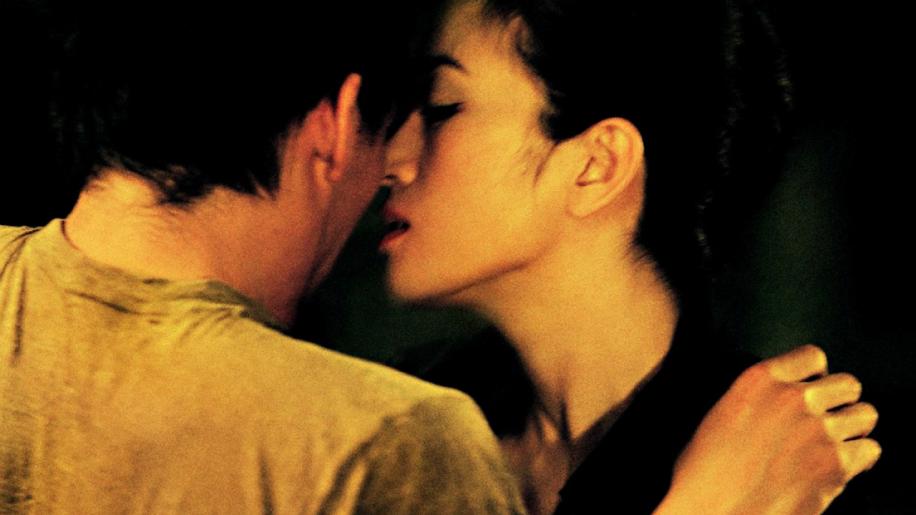 Split into three parts, Eros combines the talents of three distinct directors and a multitude of decent stars to tell three variations on the theme of love and obsession.

Madam Hua is an expensive courtesan - a high-class prostitute who specialises in the fetishes of the rich and decadent. They visit her apartment and always leave happy. Despite her popularity and her price, she has lavish tastes in clothes, employing her own private tailor to see to her every need. The tailor is actually an apprentice, but he dedicates his body and soul to providing her with the wondrous dresses that she has become accustomed to. Slowly the tailor's apprentice, Zhang, finds himself prospering in his business, but at the same time Hua's apartment gets visited less and less. Will she be able to stop spending money in the way she has grown used to and will Zhang ever show his affection beyond what he puts into the dresses he makes for her?

Directed by Wong Kar Wai, The Hand would easily work as an addition to his famous trilogy - Days of Being Wild, In the Mood for Love and 2046, even starring two of the actors from the last part of the trilogy, Gong Li and Chang Chen. Set in 60s Hong Kong, his most loved of eras, he does a fantastic job at creating a feeling of depth and character to a story that has to be told in little over half an hour. It does not take long for you to be gripped by the tale of blind love, told almost entirely in flashback - another thing he likes to do as a director. Gong Li is as striking as she was in 2046, perfectly cast as the elegant, exquisite Madam Hua and ably matched by Chang Chen's moustached apprentice, Zhang (Wong Kar Wai loves giving his male 'heroes' moustaches as well, probably to reinforce the era). Chang Chen was also in Crouching Tiger, Hidden Dragon and, whilst he was no Tony Leung, he stands his own in this little romance.

Now we're in late Nineteenth Century New York and an advertising salesman, Nick, is paying a visit to his sister's psychiatrist, Dr. Pearl, in order to find out how to cope with his recurring dreams about a woman that is not his wife. Initially both nervous and sceptical about the help that this doctor can give him, he eventually confides in him his true feelings while all the time the psychiatrist appears to have his own agenda.

Written and Directed by Steven Soderbergh, who gave us Traffic and - more relevantly - Sex, Lies and Videotape, Equilibrium is an interesting little short story with almost the same visual magnificence as The Hand, despite an entirely different style. Shot almost completely in monochrome (again to suit the period), the whole story basically evolves in the therapy room of this psychiatrist, as the two interesting characters mentally feed off one another. Robert Downey Jr. plays the patient with utter conviction - although it probably isn't that much of a stretch for him. I think he's a very underrated actor who has had a run of seriously bad luck and I hope that his upcoming action-flick Kiss Kiss, Bang Bang, from the screenwriter of the Long Kiss Goodnight and The Last Boy Scout, brings him right back into the limelight. Playing opposite him we get the great Alan Arkin, who has also seen his fair share of psychiatrist's rooms, mainly because he has played the part before (Grosse Point Blank). As expected he is perfect in the role, twisting his usual professionalism to reveal a character who has some of his own issues.

“The Dangerous Thread of Things”

The final part of the trilogy follows a middle-aged married couple who, whilst travelling out one day from their villa in Italy, find themselves disagreeing over the topic of sex. The husband loves it and the wife just isn't as interested anymore, so one thing leads to another and they decide to make their separate ways home, both strangely encountering the same individual on their journeys and learning one or two things about love, sex and intimacy.

The Dangerous Thread of Things is directed by Michelangelo Antonioni, of Beyond the Clouds fame. Clearly a man who is capable of telling very realistic stories of love, passion, sex and relationships - as is evidenced by prior work - his offering here is the weakest of the trilogy, neither visually enticing nor cleverly plotted. In fact, this part of the trilogy is probably the only reason why it received a Category III rating and yet, somehow, he manages to make the bare nudity of the show less sexy than the hints and tastes you get in the other episodes. It does not help that the cast - Christopher Buchholz as the husband, Regina Nemni as the wife and Lusia Ranieri as the stranger, are not very likeable. The husband seems like a slimy rich letch, the wife is a frigid ice-queen and the stranger is just too capricious and whimsical for words. The story does not compel, the acting is below-par and the direction is nothing impressive. This is no Beyond the Clouds.

Overall,Wong Kar Wai's opening gambit has to be the strongest part, perfectly at home alongside his previous masterworks as a companion piece. Equilibrium takes an easy second place, a serious contender for first with the dry wit of Arkin played to perfection against Robert Downey Jr.'s frenetic sarcasm. The weakest part of the trilogy is almost not worth bothering with; even the seriously gratuitous nudity is not particularly appealing because of the lacklustre, normality of the tale. It is a tough thing to correctly sequence the parts in a series of shorts like this - Sin City recently got it perfectly right, sandwiching the weakest part in the middle, almost obscuring its faults with the strong surrounding stories - but here the remaining two decent offerings, however misplaced, are still well worth your time.