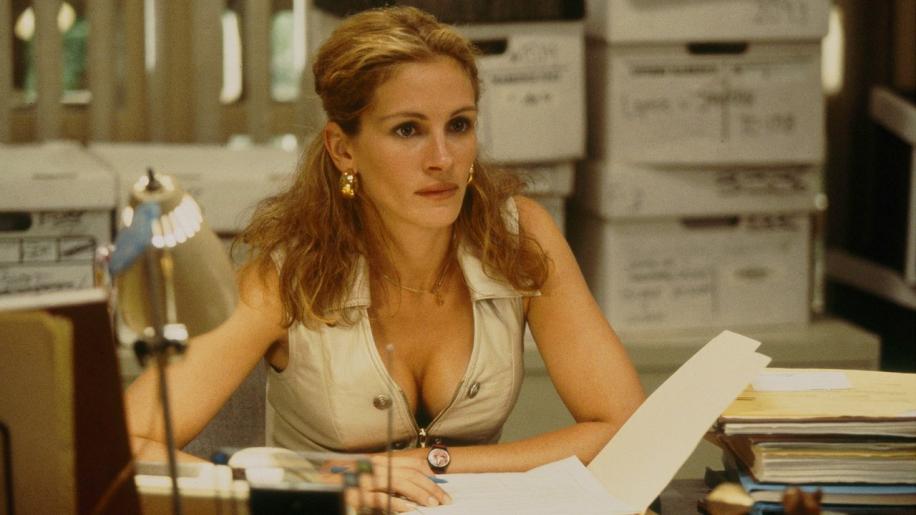 I might as well be completely upfront about this before we start. After all, every reviewer has a starting off point when sitting down in front of a new disc - and not many are that honest about it. So here we go. I like to regard myself as a fair minded individual. I do not have any irrational hatreds when it comes to films. Apart from one. I cannot stand Julia Roberts. There we go; it's out in the open. I know it's irrational. I can't even put my finger on why it is. But I really cannot stand her or her movies.

This means that apart from Flatliners I have avoided every film she has made. So, until the boss tied me to my sofa, pressed play, and confiscated my remote - the story of Erin Brockovich had completely passed me by. For others who may have had the same attitude, the film is directed by Steven Soderburgh - certainly one of my favourite directors. It actually tells a true story - the characters portrayed here are real.

The film opens with Brockovich (Roberts) in a job interview. She doesn't get the job and on the way home her car is hit by a culpable driver. She gets lawyer Ed Masry (Albert Finney) to represent her, but after losing her temper in a foul mouthed tirade in the court she loses the case and is left penniless and seventeen grand in debt. In desperation, after Masry fails to return her calls, she turns up in his office and refuses to leave until he gives her a job. This he does, and when she is given a pro bono case she asks for permission to investigate it further.

After permission is granted she starts work on it, only to discover a possible conspiracy involving the Pacific Gas and Electric Company polluting the local water supply. Using her, erm, feminine assets to gain access to some crucial documents she begins to build a case before being fired for being away from the office. However, Masry realises he has made a mistake and rehires her and they begin to work on the case together, eventually resulting in a triumphant conclusion.

Roberts won herself an OSCAR for this role, and I have to say, through gritted teeth, that she does indeed do a marvellous job here. She really does seem to inhabit the character of Erin, and delivers the kind of naturalistic performance that is completely free of showmanship. It is actually quite easy to forget you are watching Roberts and instead believe you are watching a real character. Able support is also given by the always reliable Finney - who I believe is one of the most underrated actors working today. He enriches every character he portrays and he does so again here, bringing a wonderful dynamic to his interactions with Brockovich.

On the face of it, the choice of Soderburgh to direct seems unusual. However, it does in fact prove to be a masterstroke. The film is one which could have ended up becoming very sentimental, pulling the heartstrings in a very calculating way. However, in his hands we get a welcome sense of realism, a real sense that events are moving forward of their own volition rather than being calculated for emotional effect. Like Roberts performance, the direction here is very naturalistic and completely lacks any kind of showiness or artifice. Instead, the film is calculated to draw the audience in to the world and truly inhabit it.

After watching the film, however, I did have some reservations about the story. It didn't quite ring true to me, so I did some research. Unfortunately, it does turn out that a lot of facts are twisted in the film in order to suit the agenda of the makers, and to make Erin appear more of a heroine than she actually was. Without going into great details (that is not the place of this review) it would appear that a lot of artistic licence was used. Whereas I can sometimes see the point of a true story being altered slightly to fit the confines of a cinema screen, I do feel that the alterations here move the film too far in the direction of an Erin Brokovich love fest. Just one small example is the portrayal of her as a foul mouthed trailer trash woman who manages to transcend her circumstances. The reality was she was a highly educated university graduate. But that doesn't make such a good film.

The twisting of reality in a supposedly “true” story is a trend that I have always hated and will highlight. I have mentioned it before on this site, and no doubt I will again. However, if this trait in moviemaking does not irk you as much as it does me, you are likely to find much to enjoy in this film. The acting and direction are spot on, and the tale is one that will certainly warm your heart as well as stretch the old brain cells. Maybe this isn't a film for a Saturday night popcorn fest - but I cannot imagine many films better for sitting down together with your other half in front of.