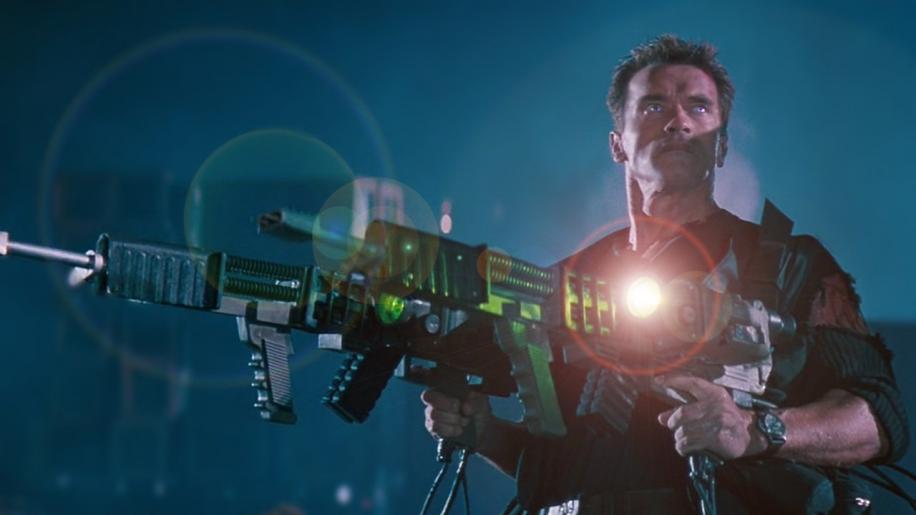 In May 1997, I purchased my first (of many) DVD players. The company that I brought it from has long since disappeared from the magazine advertising sections which it used to frequent and it seems they ceased trading a few years ago.

However, they did a stellar job at managing to import a US machine for me from Pioneer, and as a way of showing their thanks, they threw in three free US Region 1 DVD's - Tim Burtons Batman, Space Jam and the Arnold Schwarzenegger led Eraser. Out of all of these three discs, the only one that still sits on my shelf is the latter disc, Eraser. I think the reason for this is simply because the other two discs have since been updated by Warner on SD DVD, whilst Eraser has remained in its bare bones form for the last ten years. Being the technophobe that I was (and probably still am), I also brought the Laserdisc of Eraser - as a lot of people were back then, I was a bit doubtful that DVD would catch on - plus I was sure that the big twelve incher looked and sounded better! How wrong I was on both counts. The Laserdisc has long since rotted whilst the SD DVD still looks and sounds as good as it did ten years ago. Never seen the need to replace it, I was surprised by Warner decision to actually release Arnies action thriller on Blu-ray ahead of my other two early purchases - it was the only one of the three that bombed terribly at the box office.

At the time that Eraser that was released, the big Austrian was having a torrid time trying to get bums on seats in the cinemas to watch his films. This was mainly down to misguidance on his career path in my opinion. Comedy is not, shall we say, Arnies forte...but for me, Eraser is the big man smack bang on form.


For those of you that haven't yet had the pleasure, Arnold Schwarzenegger plays John Kruger, a US Marshall who “erases” the identities of those people entering the FBI witness protection programme. His latest case is a beautiful woman by the name of Lee Cullen (Vanessa Williams). She appears to have uncovered a plot by a US Marshall to sell hi tech weapons to the enemies of the United States in collaboration with her boss, William Donahue (James Cromwell). The problem being that the said US Marshall is Krugers boss and mentor, Robert Degurin (James Caan). Together, Kruger and Cullen must stop the sale from going through using any means they can,

And there you have it - simple plot = decent action film starring Arnold Schwarzenegger. Nothing complicated about it at all - and that suits the big man down to the ground. All he has to do is turn up, fall out of a burning plane (without a parachute - he throws that out first and has to chase it...), land on a car (smashing it to pieces), deliver a witty line to some kids who see him “land”, get his hands on a couple of the super guns that are being sold and kill everybody in sight. Oh yes - and blow stuff up - lots of stuff!

As I said earlier, it's the big man back on form after the terrible Junior. It's no True Lies mind, but it's not far behind.

The thing that Eraser does for me is show that Schwarzenegger can actually dominate the proceedings in a film when he's playing a human being. There's no emotion involved so very little acting. James Caan gets most of the best one liners unfortunately but he does seem to be having a ball playing the bad guy.

The film moves from one action set piece to another effortlessly and the story is written around those set pieces. Director Chuck Russell (The Mask, The Scorpion King) seems to make no excuse of this fact and lets his leading man do what he does best - cause total and utter carnage.

So whilst this was a sentimental release for me by Warner, it was also a welcome opportunity to re-visit a film that I hadn't spun for a few years. I can heartily recommend that action film lovers and Arnie fans alike do the same as it's a bit of a guilty pleasure that shouldn't be left on the shelf for so long before the next visit.