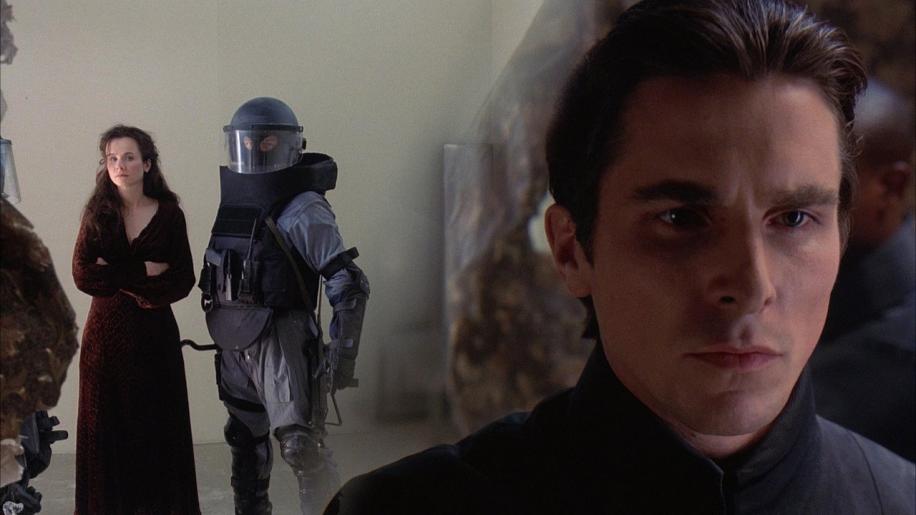 Equilibrium is a sci-fi/action thriller set in a near future time, just after the third world war. The survivors build a new community based on the preaching of the father, which outlaws all feelings and emotions from being felt or expressed. The law states that those found feeling will be put to death. Upholding this law are a group of super cops called the “Clerics” well trained in martial arts and gun play and extremely deadly. To suppress the feelings outlawed all of the population take a drug which effectively dopes their responses to feeling, it is also an offence punishable by death to miss your dosage. The cities in which these people live, are bland and uninspired with no artwork, books or music allowed, outside the city walls live those who want to feel, and who hide valuables in the cellars of the ruined cities of the past. Cleric John Preston is the top Government agent responsible for destroying those who resist the rules. But when he is forced to kill his partner for a “sense crime” he begins to question his loyalty, and stops taking his medication. Now the man, who has been trained so highly to protect the strict laws, has become the only person capable of overthrowing it.

Although the movie had a very limited run at Theatres worldwide, it has built up quite a large fan base and you can see why. The production design and action sequences are breathtaking for such a low budget ($30m) film, and add greatly to a story which tries very hard to work. Unfortunately there are just too many plot holes and inconsistencies contained within the first half of the movie for it to work on any kind of intellectual basis like the classic “1984” (which this film so obviously takes inspiration). I can't help but feel that if they had managed to tighten up the plot during the first reels, we would have had an even more satisfying sci-fi thriller. Saying that however, if you can ignore the blatant plot holes, and just take the movie at face value for what it is, then this is a very reasonable popcorn flick, with some breathtaking action set pieces, especially during the final 20 minutes