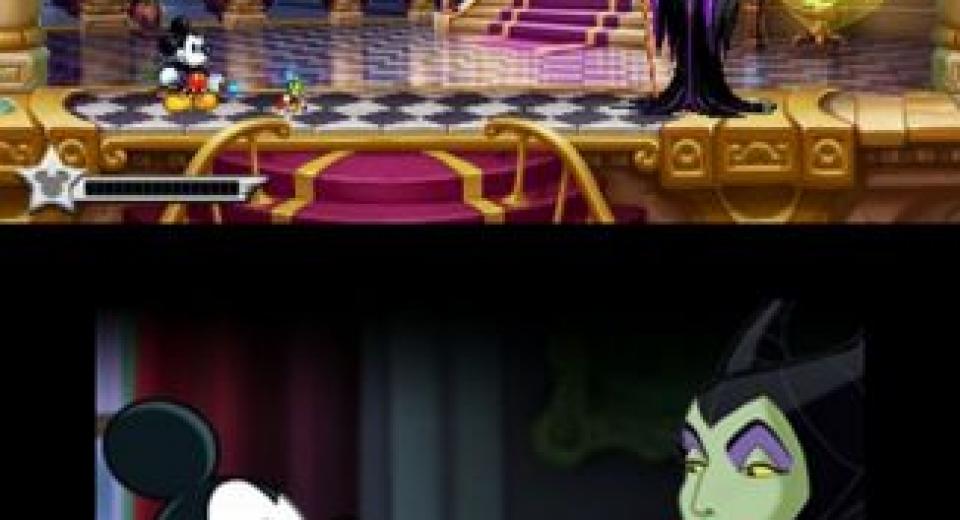 In the second of our Disney-themed reviews this week, evil witch Mizrabel (can you see what they did there?) is running amok in the forgotten Wasteland; perhaps an apt metaphor for the release schedule of the 3DS. Refusing to take her banishment lightly, she’s hatched a scheme to kidnap a whole host of beloved Disney characters and imprison them in her equally forgotten Castle of Illusion, before stealing their “heart power” with a view to using it to transport herself back into the limelight. It’s a plan that cannot fail, right? Enter, stage left, Mickey - of the Epic variety, and his sidekick Oswald the still slightly-annoying rabbit.
For those of you old enough to remember, Epic Mickey: Power of Illusion is a throwback platformer very much in the style of its inspiration, the original Castle of Illusion on the Mega Drive. Leaving aside my slightly-tarnished memories of that ‘classic’ (I never really got on with it back then, and looking at it again now, I think I was right), this reboot has been given just enough of a modern “Epic” spin to make it relevant to a new generation.
The core of the action revolves around traversing your way through platform-heavy 2D sections, rescuing Disney characters and butt-stomping your enemies for fun and profit (Scrooge McDuck operates a between-levels shop in which to spend your murderous gains). Mickey has a strangely floaty range of movement (much akin to the original and the 3D sections in Epic Mickey 2), but a litany of features rehashed from the likes of Mario ensure the platforming remains familiar and gentle throughout. Spikey blocks bounce rhythmically in your path, cannons fire round balls that can be bounced on, generic opponents shuffle towards you, others wield axes or projectiles to make you consider their patterns; there are hidden nooks and secret paths to be found, and it’s all very humdrum but never offensive. By tagging “Epic Mickey” onto the front of the title however, you can bet your boots that paint and thinner mechanics feature heavily; and sure enough, they do. Enemies can be targeted with either brush and dispatched remotely if you spy a tricky section coming up, and their cute little corpses produce either health or currency with which to shop in the fortress that your party calls home. There is a finite amount of both those DIY supplies however, so be sure to take regular top-ups from the brushes that litter each level.
The bottom screen on the 3DS also acts as an X-ray map of the colourful action of the top, highlighting objects and characters that are either missing from the scene, or can be similarly erased. Tapping on any of these brings up a quick trace-the-outline sketch or a fill-the-object painting to perform with the stylus, at which point the action unpauses and your newly-changed level layout pops into view. Performing those tasks well earns you both coins and a boost to your super meter, which allows Mickey to temporarily move a little faster and attack with more gusto.
On the surface of it then, blending the sort of missing-block puzzling that you find in Trine with the basic platforming of a Mickey game isn’t a particularly bad concept, but the implementation here is just dull. There are few points in which the game challenges you to use any element of timing, and obstacles can all too frequently simply be avoided by taking a slightly different route or just jumping over the spot where a platform could be drawn in. For the few sections that Power of Illusion gets this right, it’s a fun little take on the genre, and you can’t help but wish the developer carried the concept through with a little more conviction.
The Disney licence is well used however. In-between levels your syrupy-sweet chums populate various rooms in your fortress home, and each one of those locations can be upgraded to provide a more suitable themed environment for their tastes. There’s a neat little meta-game here of wandering around talking to each of the characters and finding out what they need; wishes that can sometimes be fulfilled through interaction with another character, sometimes by finding items in the world, and other times by spending a token to alter the room they inhabit. It’s nothing too deep and it’s hardly a game in and of itself, but those sections felt like a welcome break from the platforming, and a suitable viewing platform with which to interact with each character.

Epic Mickey: The Power of Illusion is by no means a bad game. If you’re in the market for a simple platformer with a well-implemented cast of iconic characters, then you’ll likely get just about everything you need from its judicious running time. If you're also looking for something that takes the original Castle of Illusion and expands upon it slightly, then you'll come away satiated.

Times, and standards, have moved on however. Whilst Power of Illusion isn't offensive by the standards of the genre, it doesn't do nearly enough to set itself out as being anything special. Strip out the Disney licence and you've got yourself a competent if uninspired platformer with little else to advance its cause. Of course to reduce it to such would miss a huge part of the appeal, and those of you looking for a portable dose of Disney will find its illusionary charms a little more satisfying.