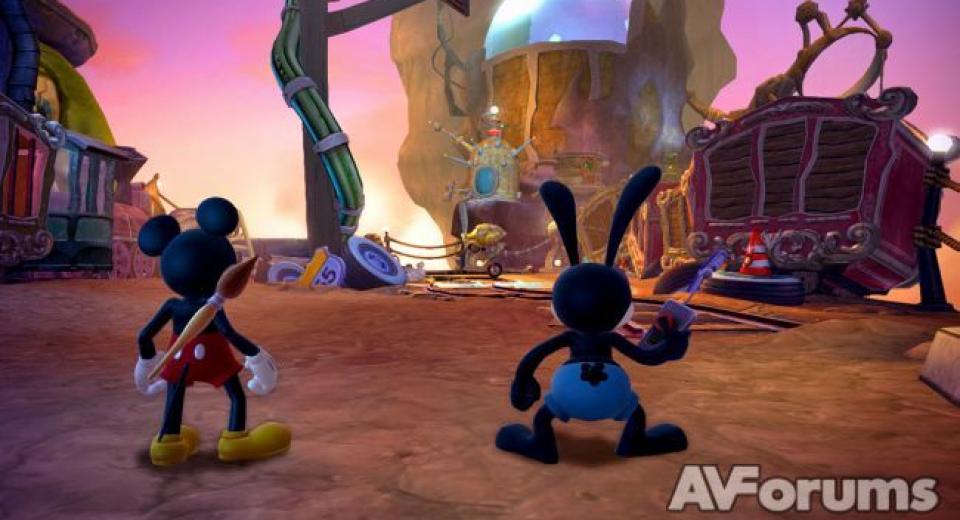 Whatever your thoughts on Uncle Walt, his Mouseketeers, Mickey, Goofy, Peter Pan or the syrupy-thick ladles of twee nostalgia-based commercial manipulation the Disney empire eventually turned to, 2010’s Disney Epic Mickey on the Wii was at least bolder than most of their other attempts to monetise that precious archive in videogame form. It was a proper platformer. It had a decent concept in painting or thinning the environment to create or remove platforms and obstacles, and it was a sign as to just how serious Disney Interactive seemed to be about kickstarting a hefty new franchise.
Despite being helmed by veteran design legend Warren Spector however, Disney Epic Mickey was a little disappointing in execution. Too dark for some and perhaps overly-complex in terms of mechanics and storyline for the younger market, Epic Mickey was also plagued by camera issues and small problems that constricted its potential. Epic Mickey 2: The power of Two is notable in that it lightens up the mood a little, allows free camera control and doesn’t seem anywhere near as tough as that first outing. Despite those concessions to a younger market however, it bizarrely pushes many aspects of its visual design even further into an Alice-esque realm of the imagination, resulting in a product that’s at times bafflingly confusing in tone.
Mickey starts by being summoned back to the Wasteland through a magic television, and despite the happenings of the first title, this land of forgotten toons and established characters is alive and well, with nary a pause for thought at his presence. Several earthquakes have shaken up the environment, reducing it to a chaotic mess of thinner fountains, broken machinery and rubble, and just as you arrive so too does the mad doctor antagonist from the original game - this time sporting a new line in musical dialogue and a new leaf attitude towards helping to cleanse the environment (surely NOT SUSPICIOUS). With those basics up and running, Mickey bursts off into each interconnected level to throw paint around and help out its denizens, solve some basic puzzles, collect outfits, find projectors, level up gear and negotiate either 2D or 3D platforming sections. The most notable change is that implied by the title. Epic Mickey 2: The Power of Two is a resolutely co-op game this time around, with the newly-empowered Oswald accompanying your adventure at all times. He’s a fully-voiced character in this new version of the Wasteland, able to shock enemies or environmental switches with electric bolts, or hover in mid-air to act as a short-range helicopter for Mickey to reach out-of-the-way platforms and secret sections. A second player can either take up the controls as Oswald in splitscreen, or alternatively the AI takes over in a decent fashion, with a quick stab of the B button prompting him to your location to perform a context-sensitive action at any given time.
With that in mind, you’d think that Epic Mickey’s range of puzzles would be suitably expanded for co-operative play, but unfortunately developer Junction Point has chosen to keep things light this time around, resulting in a game that gets repetitive quite quickly. The majority of conundrums are solved by filling in or removing parts of the environment, moving power balls around to fix equipment or dragging something into place over a short distance. There are few occasions in which Oswald is absolutely necessary, and most of those are relegated to the tried-and-tested mechanics of having him stand on a switch, hover over to a distant platform or simply power up a mechanism with his electric happy flappy ears. There’s little in the way of invention and even as a kids game, I suspect the repetition will grow tiresome quickly.
The act of controlling Mickey is also somewhat bizarre. Shorn of either the Wii Remote or the PlayStation Move controller, the 360 version operates with a right-stick reticle on screen at all times to control the direction of your paint. You’re able to move the reticle around in the dead zone in the center of the screen, but then anything outside of that shifts the camera as per other 3rd person games. It works well enough as a replacement, but it is sluggish. When combined with Mickey’s fairly languid pace and generally lethargic jumping and movement, Epic Mickey 2 gives the impression of a fairly imprecise and floaty game to control. There’s a certain charm in adapting to it (in a similar fashion to that of LittleBigPlanet), but frustration soon mounts up when compared to the best the genre has to offer. The plundering of the Disney licence on the other hand, is just as hearty as it was in the original. There’s simply oodles of content in here to be found, ranging from classic characters that need assisting on quests, costumes to collect, projectors to seek out that warp you into 2D platforming levels based on classic cartoons, picture spots to find and full-blown cartoons to watch direct from the menu. The overworld sections are designed in a haphazard but bright and colourful fashion that builds a little nostalgia into proceedings, but the underground 2D sections that link each area are full-blown fun-house style dips into madness that border far too close to schizophrenic design. There’s simply too much going on during those levels to make them coherent and enjoyable, and the lack of visual language for which objects are paintable leads to some maddening moments of halted progress.
Indeed that’s a fault of the game as a whole. Epic Mickey 2 never really finds a cohesive manner in which to tell you its ideas for any given scenario. Aside from a quick (and frequently nonsensical) soundbyte when you enter an area, it’s completely up to your own initiative to discover the often-simple solution to any of its given puzzles, and whilst that’s not a bad thing in principle, for the most part the environment isn’t designed to lead you in any specific direction or give subtle hints about where you should be looking. Paintable objects show up in white outline as a basic guide, but everything is far too chaotic. Solutions are stumbled across rather than worked through, and that’s a huge deterrent to continuing through the whole experience.

In attempting to fix the problems with the original Epic Mickey, developer Junction Point has at least been partially successful. Epic Mickey 2 is a much lighter and brighter affair to that of its predecessor, and the amount of content on offer has to be praised - as does the plundering of the Disney licence for suitable avenues to explore. Its problems cannot be overlooked however, and although Mickey's quest is certainly an epic length, the slow pacing and repetition eventually show through as padding.

I'm convinced there’s still a gem of a game waiting to get out from the Epic Mickey licence. The combination of platforming, adventuring and iconic characters should be one to produce a special result. Epic Mickey 2, unfortunately, isn’t quite there; despite a few promising signs of life. Maybe thrice is the charm.