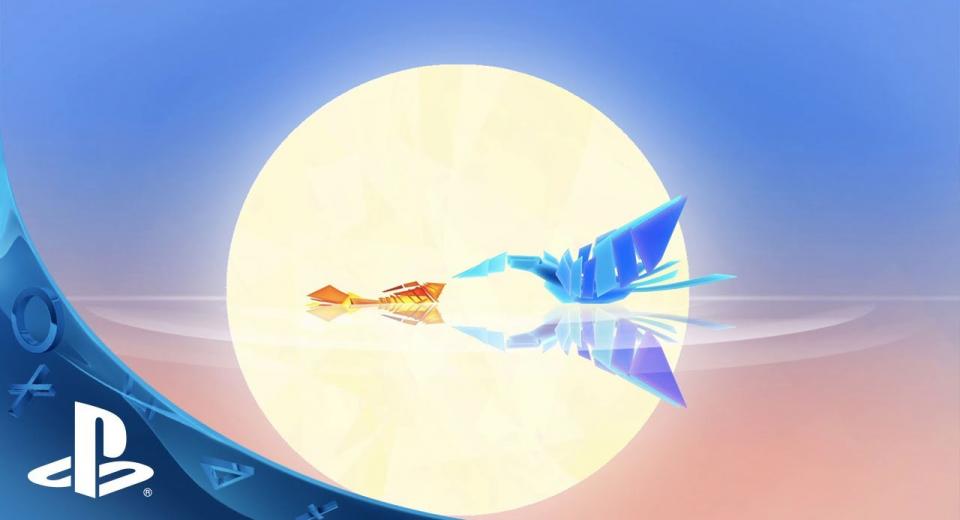 The sudden release of a game without prior extensive build-up coverage is usually treated with some suspicion.

However, at this year’s E3, the news that Sony’s latest studio Pixelopus' first offering was instantly available was met with much excitement. Being deemed worthy of a place during the company’s main show, and pushed as an indication of the kind of unique content that would be available on their platform, this was sure to be seen as a sign of quality.

So, yet another artsy downloadable title on a Sony machine ready to enter the pantheon of smaller gems, right?

When it was unveiled, Entwined bore all the hallmarks of a potential classic, sure to resonate with the kind of gamer who prefers their experiences to lean more towards the impressionistic and atmospheric rather than linear storytelling with gameplay punctuations.

The premise of a love story between two souls was unambiguous but minimalistic, and the tagline of “Always together, forever apart” matched the uncomplicated nature of the initial gameplay shown. The problem is, there isn’t much lying beneath that simple, catchy line or the basic mechanics.

One is the loneliest number The idea of controlling two characters at the same time was touted as something novel, but anyone who’s played Brothers: A Tale Of Two Sons knows that it can work spectacularly well. It can be used to tax the reflexes, make the gamer think in a slightly different way in terms of co-ordination, and most importantly it forces the player to consider a relationship between the bodies on screen. Entwined uses the same method, but in a far more shallow way.

Your left stick controls the orange fish, whilst the right governs the movement of the blue bird. Both rush headlong through a cylindrical vortex and coloured shapes fly towards you which must be navigated. The twist being that the fish stays on the left, the bird on the right, and they need to pass through their own colours, only meeting in the centre when a green shape appears. It gave me flashbacks to the Millennium Falcon escape from the Death Star in Super Return of the Jedi, but I’m sure there are more apt (and modern) comparisons to be drawn.

As you successfully pass through the shapes, orbs appear which are to be collected so as to fill a gauge for each creature. When both are full, the bird and fish can seek to combine, during which time you need to keep navigating the onrushing coloured shapes until finally you can transform and play out a seemingly unfailable end of level epilogue as a dragon. It’s ambient, it’s floaty, it’s slow soothing colours passing your eyes; sort of like a chill out room for the game.

Two can be as bad as one

The story though doesn’t really need the sudden tranquility, as the levels themselves aren’t taxing enough to make it the blessed relief it was so clearly designed to be. The music and art direction are solid, but something doesn’t quite feel as inspired or cohesive as the more notable examples of ambient gaming, such as Flow. It's faster paced than that, but in its hectic moments it’s far from the synaesthesia of a Rez, relying on finding that zone of almost trance like control. It shares the premise of a story told through imagery and mood, as opposed to writing, which is just as well as beyond the tagline there's no extra context given.

There is a rhythm to be found, and the use of cylindrical playing space means that the thumbsticks need to be kept at opposing outside edges to one another. This means success is found in nice round movements, little semi circles and sweeping gestures in alternating directions. When the course is well designed the flow works to draw you in, but the variation is stretched over nine story levels, and the minor differences in shape size or movement - though clearly evolving - isn’t enough to make the stages distinct. The aesthetic of each does that, but your time won’t be spent looking at it, meaning it works largely as a backdrop to be glimpsed at the periphery of what you’re staring intently at, which are fairly plain shapes. The story is easy, and will only last you an hour or two tops, so the Challenge mode is where the real, well, challenge lies. There are five stages, but the difficulty is ramped up significantly as you only have three lives. This is entirely juxtaposed with the lenient approach of trial and error that makes the story levels a task in endurance rather than skill if you’re struggling. In order to gain access to the next Challenge stage you must first last a set amount of time which directly equates to a score. If anything, the disparity between the two modes is too pronounced as, at the time of writing, a quick glance at the online leaderboards showed fewer than 50 people had amassed a score sufficient to unlock the final stage.

There are things you can do to better the experience though. The music is integral, and if you’re able to play it through a decent pair of speakers it greatly enhances the game. Similarly, the shifting neon visuals works best in a darkened room, where light can grow into your playing space.

If there’s one word that should describe the game, it’s ambient. The problem is Pixelopus have crafted something that’s so straightforward in core gameplay, and threadbare in pointers as to where they consider the hidden depths to be, that any hints of symbolism and underlying poignancy may as well not be there. Which just leaves the question of how much you enjoy artistically presented titles with nice music, when those features leave the game element as secondary? On a checklist of components it looks like another Flower, but it's far from it.

You're my soul mate

I think we should see other people

Entwined seems almost an experiment in minimalism; something unsurprising given this is Pixelopus' first attempt and the small team is made up of recent graduates. It’s built on unexplained symbolism and doesn't so much wear its philosophical meanderings on its sleeve as allude to them cryptically. As such, it relies on the player buying into the aesthetics, enjoying frills-free core gameplay and either discovering or adding their own interpretation of the “emotive” story.

The distinctive visuals work in as much as they please the eye, but the depth that might have imbued them with real significance is harder to find, if not missing.

Birds, fish, dragons, orbs, lifetimes, a cross species love story with no words; if these sound like they’re enough to sustain you without any further explanation or gameplay development, and you’ve got some money left in your PS Wallet, then Entwined may just have a chance to captivate your imagination for an hour or two. But it’s at a low price for a reason, and the brevity of the main narrative premise upon which it was sold, the time necessary for reaching its goals, and the reward on offer just couldn’t justify a higher cost.

It’s a melodic and often beautiful light show that's arguably more of an accomplished game design project than a fully fledged title; short, sweet, laudable in its ambition and art style, but also rudimentary in its mechanics and sadly quite forgettable.