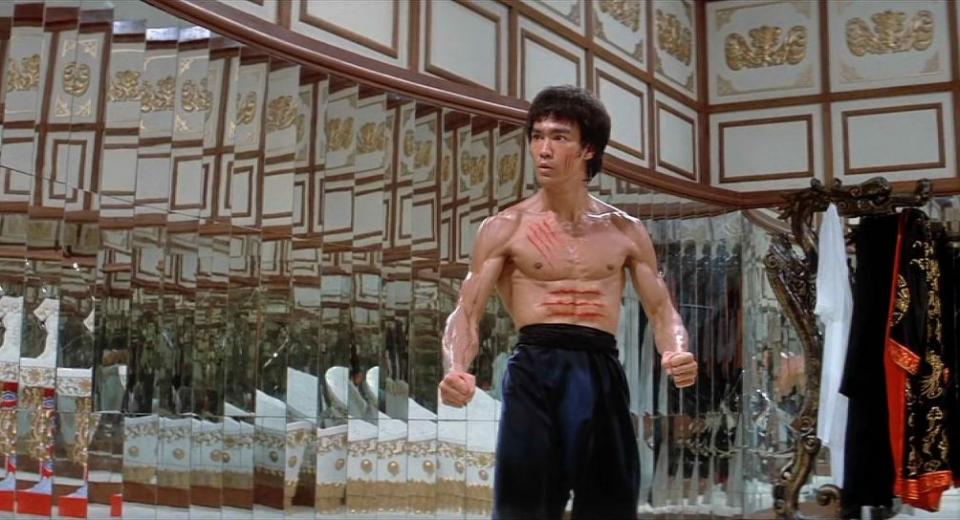 The thing to remember initially when assessing the quality of this true classic is the era from whence it came. 40 years have passed, and this anniversary edition of Enter the Dragon has never looked better.

Let's dispense with the obvious - it's not a sharp image. It was never going to be. It suffers slightly from age in this department, but it's worse in some scenes compared to others. The opening scene in qhich Bruce is fighting in front of the monks looks pretty crispy compared to how you'll remember it. It's a great start. Though, before you get too excited, it's not long before the heavy grain shows up to spoil the prettyness, like in the opening titles for example - but I have to say I like it just how it is, it's everything I remember, and to me that's a good thing. Ok for the videophile it's likely to cause some mild irritation, but anyone can see that this is an old film, and to mess around too much is only going to make things much, much worse. It's not awful by a long stretch though, and it's a relief to see that they haven't gone mental with the DNR treatment. Though there are signs of noise reduction, it's acceptible for the most part and isn't smattered over every shot. Although having said this, the scene in which Williams is attacked by the police is pretty poor and looks almost out of focus. What can you say, a restoration is only as good as it's source.

Colours next - they look a littel dim at times, and a little over saturated at other times. It's a bit of a mish mash of vibrance, but then, so was the original. Perhaps the restoration process has slightly amplified this disparity between shots, but once again, it's not to the detriment of the picture, and nothing that I can see has been introduced that makes things worse than they were. Blacks are slightly underwhelming, and at times have a slightly brownish hue to them. Other times they can seem a little more like dark grey than black. Skin tones look like they're from the 70's. Slightly more yellow and orange than is natural. Another slightly mixed bag on the colours situation.

We can see that there has been some ireparable damage to the film on some scenes, such as the scene in which the contestants are all on route to the island on the boats. The left portion of the screen shows some tearing and verticle damage across the film. I didn't mind so much, but I felt that this is exactly the sort of thing that a restoration should focus on. It's an otherwise perfectly fine looking shot, and doesn't seem like it would pose an unsolvable problem by todays standards really, but it seems as though this hasn't had much love shown to it.

As far as photography goes, it's slightly jittery and unsteady now and then, which can be a little off-putting at times. On the whole though, it's very much a product of it's time, but it is beautifully restored in places, and slightly lacking in attention in other areas. A mixed bag as I said, but it's a fact that this wonderful movie has never looked so good.

To extrapolate a DTS-HD MA 5.1 audio track from a mono source was no mean feat, but it's been done brilliantly here. What I love about it is that it doesn't sound like the audio presentation has been treated in two decades with a 30 year gap between them, rather, the addition of surrounds has been given a subtle and unique treatment that makes it feel like DTS was around back in the 70s. A marvel indeed, and well worthy of praise.

As for dialogue, it's mid range heavy, it's crunchy at times, but it's clear, and precise. It's had a little compression added to it which has levelled off the different lines that I had found slightly problematic in previous renders of the audio track. No such problems anymore.

Sound effects occasionally distort, and often feel very brickwalled, though it's all very mid rangey and lacks any significant dynamic range - such was the way at the time of mono when all sounds had to fight for the one single channel. It's not all bad though - far from it. Some of the sounds have had a lovely treatment, giving them a pristine shine. A perfect contrast of the two extremes between distorted and crushed sounds and remastered pristine sounds are the gong at the beginning of the feast when Mr. Han enters - it's completely distorted and crushed. This is soon followed by the creepy girl who throws darts at apples - with each successful strike comes a whipping whoosh sound, which is shiny and sharp. The same goes for the scene in which Bruce is practicing - his screams are terribly distorted, but his whipping feet and hands crackle powerfully and with clarity.

And that score from Lalo Schifrin - boy does it sound rousing. It's so unbelievably epic sounding that it's impossible to finish the sound section without mentioning it again. It sounds rich, colourful and booms with a depth that's lent it even more impact than I ever thought imaginable. It's a brilliantly appropriate score, and it sounds wonderful here.

It's mostly music and ambience that occupies the rear channels.

So once again, a slightly mixed bag in terms of quality, but it's definitely a decent offering. It's never going to blow anybody away, but it's about as good as can be expected from source so old.

One of the best discs I've seen for additional content, mostly because it comes with a small envelope of rare images and cards that has to be seen to be believed. A real fan's package. Plus there's a ton of special features on the disc that's well worth investing a few hours of your Sunday afternoon in.

Commentary by Paul Heller
Insightful and interesting, Heller discussing the scenes without being too wordy. It's like watching the movie again but with the legendary producer in the room with you.

Behind the Scenes - No Way as Way
A 26 minute featurette that shows footage on and off camera. Interviews, thoughts and comments on Bruce from a variety of people who were involved in the making of the movie, including Linda & Shannon Lee, and the Master himself, Bruce Lee.

Behind the Scenes - The Return to Han's Island
Another 10 minute behind the scenes featurette that talks about the locations used in the film and how some have survived to this day.

Blood and Street: The Making of Enter the Dragon
A half hour show that's pretty self explanatory. Again, worthy of your time without any shadow of a doubt.

Bruce Lee: In His Own Words
A 19 minute collection of Bruce Lee nuggets of wisdom as pieced together by John Little. Though audio quality is questionable at times, it's worth persevering, even if you find Bruce Lee's philosphy slightly cringeworthy.

Linda Lee Caldwell Interview Gallery:
Love and Kung Fu
Into Hollywood Through the Back Door
Bringing the Classroom to the Camera
The Real Bruce
Mental Self Defense
Enter the Dream
Planting the Seed: Growing a Film
Incidents on the Set
Setting the New Standard
Bruce's Influence on His Family

1973 Featurette: Location Hong Kong with Enter the Dragon
8 minutes worth of information on Hong Kong. The footage is certainly showing it's age here.

Backyard Workout with Bruce
Ever wondered what a lesson from Bruce Lee would look like? This is him in his back yard, kicking some guy, really hard - amongst other stuff.

Bonus Feature: The Curse of the Dragon
A whopping hour and a half feature about Bruce Lee. It's old, it's not great quality, but it's a ridiculously informative look at the life of the man himself, with insights from close friends and family.

Theatrical Trailers
A bunch of promo materials that were designed to raise interest in the movie prior to it's release.
Mysterious Island
Champion of Champions
The Deadly 3
Island Fortress

TV Spots
As above, but there's more of them
Roper, Williams and Lee
The Deadly 3
The Island of Han
Review Spot
Champion of Champions
Fury is Back
The Crown Prince of Combat

Enter the Dragon is one of the most, if not the most important Kung Fu movie in history, and it's never looked as good as it does here. It's a tale of loss and revenge. Ultimately, Enter the Dragon is the iconic action movie. It has the righteous quest, the archetypal bad guys, the exotic location and, best of all, it has the legend himself; Bruce Lee.

This 40th anniversary edition is stuffed full of special features and well worth the purchase, not least for the special pouch of goodies that comes in the package - believe me, I was more than delighted when I opened it up and found this envelope full of original paraphenalia dropped out onto the floor.

If you haven't seen this movie before, there's never been a better time to see it. Do yourself a favour and buy it immediately. If you have seen it, well, let's be honest, you can never see Enter the Dragon too many times. So put on your tight fitting black sweatsuit, rest your nunchucks behind your neck and one more time, Enter the Dragon.