"How did your sister get there before you?" 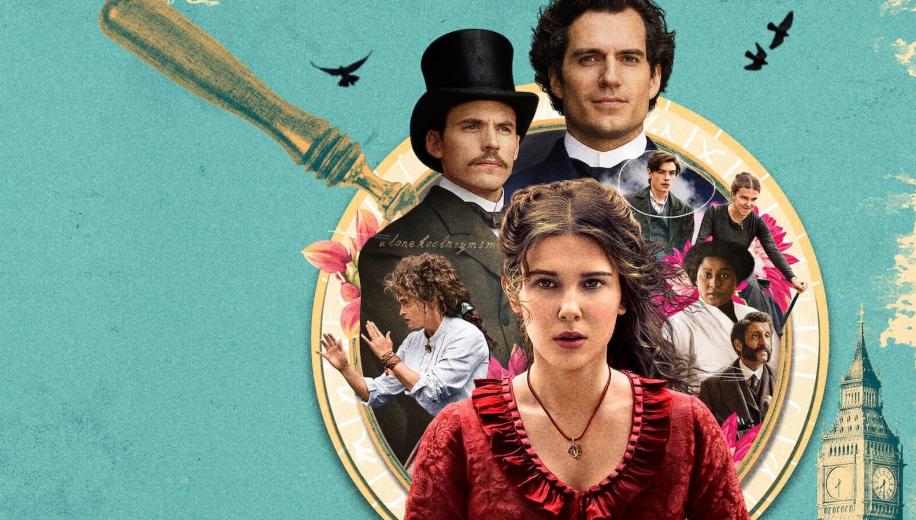 Netflix's franchise-in-the-making adaptation of the first book in Nancy Springer's Enola Holmes series affords us the teen-centric Sherlock movie nobody asked for, but also gives Millie Bobby Brown another opportunity to utterly shine.

Everybody loves a good detective with neuroses, and there's no one more iconic than Sherlock Holmes. Whether you prefer the classical interpretation of Rathbone, or the seminal TV works of Jeremy Brett, the fun and flashy Robert Downey, Jr. blockbusters, the equally frenetic contemporary BBC series, or the US's Elementary, the most prolific of any of the franchises, the works of Sir. Arthur Conan Doyle have been rich for the mining, with something for everybody. The adventures of Sherlock's teen sister may not have been the obvious next step - or maybe, these days, that's precisely the direction we were likely to see the material going in - but it is not an unpalatable one, arguably affording something considerably more interesting than a mere young Sherlock (which has already been covered anyway).

When her mother mysteriously disappears, Sherlock's younger sister, Enola, embarks upon a cross-country trip to get to the bottom of the matter, uncovering a far-reaching conspiracy that could threaten the very nation. With her elder brothers in tow - Mycroft an obstacle, and Sherlock an unexpected ally - it's time for Enola to live up to the family name.

Playfully adapted - and indeed written - with plenty of welcome to-the-camera asides from an absolutely entrancing Millie Bobby Brown, Enola Holmes is a fun little jaunt that may well lead to a fully fledged Netflix franchise if it's popular enough. And Brown is more than enough reason for this to be very good news indeed.

It's still quintessential Netflix work, running at a bloated, unforgiving 2+ hours in length when, if Netflix actually demanded some decent editors work on their features, they'd likely produce much leaner, more refined finished works. And, again, true to Netflix form it looks absolutely gorgeous in Dolby Vision but also way too dark during some latter sequences. But it's a glossy, well-made production that also fits the company's high production value standards, and at least it comes with some pedigree.

The setup is initially way too lightweight and silly - with Enola basically left an early precursor to an Escape Room puzzle by her mother - and the unravelling mystery proves just about as long-winded as you'd expect from such a bloated runtime, but every moment Brown is allowed to take centre stage the film lights up. Sure, Helena Bonham Carter makes for a suitable mother Holmes, Henry Cavill is pleasantly reserved as a perfectly assured Sherlock, and Sam Claflin suitably cantankerous as Mycroft, but this is the Brown show all the way, with the Stranger Things starlet absolutely captivating right from the outset.

As Millie Bobby Brown's first potential film franchise, this is a commendable effort which will, hopefully, only lead to better things

Witty, fresh and free-spirited, vulnerable but determined, Brown's interpretation of Sherlock's younger sister is on point throughout. The story does initially lapse into that slightly tedious portrayal of all men as incompetent, but it rights itself quickly enough, more interested in ridiculing the period's expectations of women rather than the inadequacies of men, and Brown doesn't ever succumb to any politically driven tactics in order to win you over, merely radiating a boat-load of charisma that keeps you on this ride long after you may have otherwise wanted to hop off. That the end result is a period universe where you are at home with a teen Enola Holmes thriving as a younger variant on her more famous brother, is something the production should be quite proud of, and it's in no small part thanks to Brown.

It's hardly a momentous Sherlock Holmes mystery: the narrative - in Doyle terms - is absolutely nothing to write home about, but as an introduction to the character and, perhaps more importantly, as Millie Bobby Brown's first potential film franchise, this is still a commendable effort which will, hopefully, only lead to better things. Don't be put off by the expectation-moderating score, it's between a 6 and a 7 and if you like it, you'll almost certainly bump it up.