Killing Nazis used to be much more fun than this 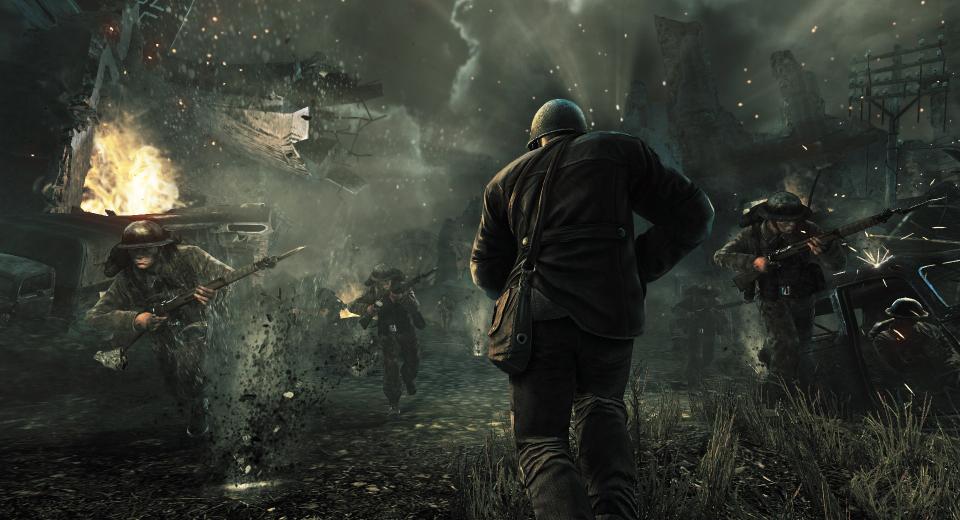 Whether it is set in the First or Second World War, I love me a good historical conflict themed first person shooter.

There’s just something about them that elicits more emotion and a greater connection than titles set in other periods. Sadly, these kinds of games are harder to come by at present, eschewed in favour of modern and futuristic shooters. Personally I feel that there is a lot more historical content and stories to be told from these two wars, which Enemy Front looks to tap into.
The latest release from CI Games (formerly City Interactive) looks to break free of the previously established sniper connections and has its sights firmly set on the period shooter genre. Ignoring their mixed success with their previous games, I applaud any studio's courage to branch out into other genres to find success in pastures new. Or old, as the case may be.

It'll be over by Christmas The problem is, when you don’t ignore their last attempts at shooters, you're left with the fact that CI don’t have a great track record when it comes to developing games that are anything above average. There’s likely to be a cult following for the two Ghost Warrior titles, but critically they failed to live up to expectations.

Whether it’s because an entire game based on sniping wasn’t all that fun, or because it was a buggy nightmare, it’s difficult to pinpoint why they weren’t more successful. For any developer, it’s hard living in the shadows of the big names in the industry, and equally as hard to get noticed.

With their latest effort however it is becoming increasingly difficult to see how CI's efforts will ever break through into the mainstream, and be spoken of in the same breath as the likes of Call of Duty and Battlefield. Their previous misdemeanours have been repeated in much the same way that they were in Ghost Warrior; in short, Enemy Front is every bit as average as you probably expected it to be. It’s one of those games where you read the text on the back of the box and find yourself believing that it could actually be a hidden gem. In truth it’s more of a chunk of fool’s gold as the promises made in the blurb are far from realistic and never actually get fulfilled. It would be naïve to think that CI would be producing anything similar to AAA quality, but there are certain standards that you expect to be met from anything releasing in today’s market.

In short Enemy Front is every bit as average as you probably expected it to be.

First things first, this is a PS3 release and let’s all take a sigh of relief for that. The new gen machines would laugh in the face of games like Enemy Front as it’s hard to say it even looks good by PS3 standards. Put into context, Resistance: Fall of Man probably looked better than this when the console first launched way back when. We saw what the PS3 could do on its last legs with The Last of Us, and some games have the potential to get people firing their machines up once more. Sadly, Enemy Front won’t be one of them.

Textures are flat, take an age to load in and it’s hard to find a smooth edge anywhere. CI seem to have taken a step backwards rather than forwards when it comes to their graphical quality, which is questionable to say the least. The entire game sounds like a cheap knock-off too, with no bass or power to any of the gun shots or explosions. Making your own would probably be more entertaining and accurate than the pea shooter-esque noises produced by some of the firearms. Thankfully, there are a few saving graces within Enemy Front which save it from being a completely dull and draining experience. The openness which was seen in the previous sniper games has been maintained to a certain degree, with some levels opening up the opportunity to play how you want. You can go loud, go quiet or mix the two, it’s up to you, but neither is clinical enough to make you favour one particular method. The sniping is identical to the Ghost Warrior series (making you wonder why this wasn’t a spin-off of that franchise) whilst the gun combat is far from perfect.

It’s not uncommon for enemies to soak up more bullets than they should, stand there and take numerous hits without flinching, or be downed with a simple bonk on the head with the butt of your weapon. It just feels, old. There's no consistency and is far from clinical giving the game an outdated feel making it unrewarding to play through. Bullets will hit your enemies if they feel like it despite you aiming right at them, you can find yourself getting stuck on the scenery and sometimes your button presses don't register straight away, neither of which are ideal when in the middle of combat.

You play as Robert Hawkins, an American war correspondent who finds himself helping various resistance groups and freedom fighters across Europe whilst reporting on the atrocities committed by the Nazis. It’s a niche approach, and one that hasn’t been explored before. It tries to recreate actual events and acts by the Nazis, but fails to evoke real sentiment and drama when it comes to its deliverance. Your emotions are meant to be pulled when you see groups of innocent people mercilessly killed or comrades falling in combat, but when you have no context or connection to them the drama feels flat.

If anything should be applauded it's CI’s research and resulting accuracy in their recreation of Europe during the war, with all the staple weapons you will recognise from past Call of Duty games. CI have tried their best to reflect on events which unfolded during the Nazi occupation of Europe. There are indications of what the game could be in the stills which are shown as a loading screen between levels and hint at dynamic events which would have been an excellent addition to Enemy Front. Shoot up an enemy stronghold or methodically take out a few patrolling guards, it’d be nice to see these have realistic ramifications on your experience. Instead, enemies are dull and lifeless and the game boils down to a pop-up shooter most of the time. There’s no fun in shooting brain-dead Nazis. The solo campaign is oddly segmented, divided into small chunks of objectives, broken up by loading screens and being chucked back into your base which acts as a hub between missions. Here you can invest in new weapons and sometimes decide which route to take to your next objective, which is something that's rarely used and wrongly so.

This could have been a selling point for replaying the campaign had the missions been enjoyable and the decision making process been more prevalent. Sadly they are token gestures. There are three multiplayer modes - Deathmatch, Team Deathmatch and Radio Transmission The latter is a token objective-based affair whereby you have to connect radio lines to transmit a frequency to beat the other team. It at least offers an escape from the usual rinse and repeat Deathmatch modes, but they all prove to be far from exciting; you may be hard pushed to find anyone else playing these modes at the same time as you.

Enemy Front probably isn't the worst game you'll ever play, but with an ever-increasing high standard we come to expect from titles nowadays this won't be far from that dubious accolade. There's just nothing to get excited about when you play it. If the missions were enjoyable and the story was decent then you could forgive it for looking poor. But as it stands, the story is forgettable and the missions are what you would come to expect from a PS2 or early last gen game, rather than one that pushes boundaries and does something innovative and different.

Even in the worst of summer droughts it's hard to see anyone playing this, other than someone who refuses to accept the new consoles are out and won't play anything that isn't set during a World War.