Enemy at the Gates Movie Review 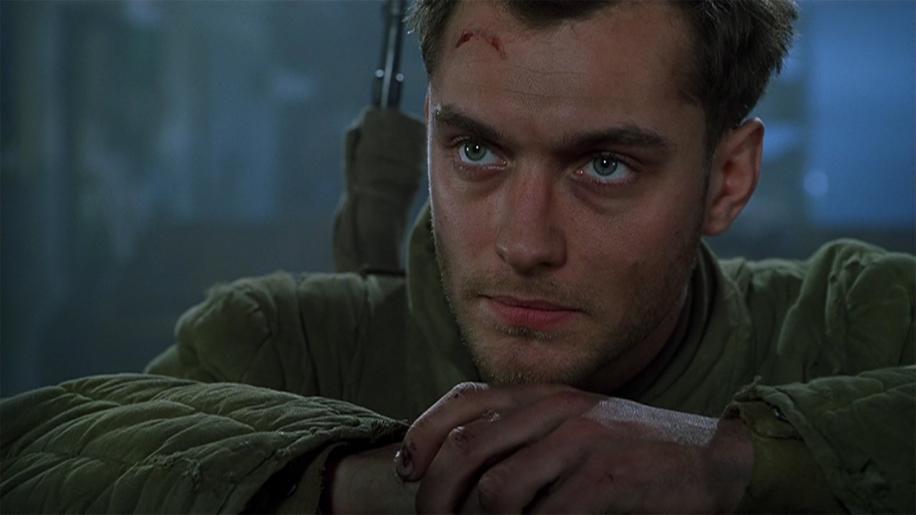 1942 and the Germans are at the gates of Stalingrad, hoping to overthrow this major Russian city. Determined to fight them off, Stalin drafts everybody into the Army, sending them to literally be cannon fodder as they try to repel the invaders. Amongst them is a young shepherd from a village in the Ural mountains, who happens to have been trained by his grandfather to shoot a rifle. Proving his amazing sharpshooting skills in front of a wounded Commissar, he soon finds himself the Next Big Thing in Russia, his kills making front page news for the Army newspaper sent out to the front line, a hero to give hope to all the soldiers during their struggle. But while the name Vassili Zaitsev soon becomes known to even Stalin himself, his notoriety draws the attention of the Germans as well, and they dispatch a veteran Colonel, an expert sniper himself, to hunt down Vassili.

Enemy at the Gates is a pretty-much true story, charting the exploits of this famous sniper, who reputedly raked up over two hundred and fifty kills during his tours in the Second World War. Enriched by its population of real-life characters, the movie delivers not only in terms of small-scale sniper duelling action, but also in terms of the larger scale of the war itself, and the turning point that was the battle of Stalingrad - arguably the first major defeat the Germans faced. Never feeling overlong, it also does not feel rushed, following Vassili from his first try with a rifle, to his experiences on the front lines, to his being drafted into the sniper division and eventually being hunted by the Colonel.

Along the way he is encouraged by the marginally self-serving Political Commissar Danilov, who appears to only want him for use as front-page news, and is intrigued by the haunted communications officer Tania, who has a soft spot for Vassili but is under the constant leer of Danilov. He gets to meet Chairman Khrushchev (who would later be the Soviet Premier), the boisterous advocate of the communist regime, and works with a fellow female sniper Ludmilla (loosely based on a real-life female soviet sharpshooter who reputedly racked up more kills than even Vassili himself). These were all real-life people involved in the conflict, and even if the conflict itself is not depicted in its entirety (it is difficult to fully capture the importance the sniper division played in the Battle of Stalingrad), and the people who appear get skewed to make them more enigmatic characters on the Big Screen, Enemy at the Gates remains true in its feel for the war. Sure, retreating soldiers may not have been slaughtered by their own using heavy machine guns, and boats would attempt a hot beach-front landing during the day, but perhaps these exaggerations were used to depict the very reason why these things did not occur. In other words, rather than have someone say 'nobody would ever dare desert the Russian Army', we saw what would happen (and did indeed happen, albeit not in Stalingrad) had they attempted to. Rather than have them cross by boat at night and talk about what would have happened should they have attempted a day crossing, we got to see what the effect of attempting the (near suicidal) daylight landing.

Even the most faithful based-on-fact movies are often populated with exaggerations of the truth, in the name of entertainment. Enemy at the Gates succeeds in providing an entertaining imagining of the Battle of Stalingrad, and the plight of one of Russia's most famous World War 2 snipers. Mixing just the right quota of military battle footage to small-scale sniper hunting to political machinations to character development, it remains a solid, highly enjoyable and authentic (at least in spirit) war movie.

The actors chosen to take the parts of these historical figureheads were also all chosen well, from Jude Law, who plays down his integral role of Vassili in a way that I, frankly, wish the actor would have done more across is career. With a plethora of perpetually smug roles under his belt (impersonating Michael Caine unsuccessfully in two unnecessary remakes), he is much more effective here as the quiet little Ural farmer who initially seems overwhelmed by all the publicity that he is getting. His superior German nemesis is played coldly and efficiently by the great Ed Harris, who has honed his skill at fully capturing the essence of supporting characters over the last decade. Rachel Weisz is both strong and sweet as his love interest Tania, although I have no idea what has become of her in Hollywood of late, here providing one of the most passionate and erotic love scenes captured on film (in front of a half dozen sleeping soldiers, these two just simply have to be together, and their intense, desperately quiet fumbling and grabbing at each other epitomises superb on-screen chemistry), and Bob Hoskins provides a towering, powerful cameo as Chairman Khrushchev, a dinky man whose career has nonetheless been brimming with memorable, screen-grabbing performances. Then there's Joseph Fiennes, who gets top billing alongside Law. I think his acting skills are totally misunderstood and over-exaggerated. He is capable of only one thing - this slightly desperate, moody pout and scowl, something that appeared to be perfect for Shakespeare in Love, but has left him walking in the shadow of his far superior elder brother Ralph. Here he plays the annoyingly smug Danilov, and you spend half the movie wanting to smack him upside the face, which I guess is probably the intention behind the character. Why he got joint top billing though, I have no idea, this story is far more about Vassili than anyone else.

Reputedly one of the most expensive British movies at the time, and Directed (and written) by French auteur Jean-Jacques Annaud (whose few by myriad film credits include The Lover and The Name of the Rose), Enemy at the Gates also looks like a pretty lavish war movie, soldiers being shredded by gunfire on a huge scale, as any self-respecting war movie would depict. The threat of the battle is reinforced at every step of the way, and war-torn Stalingrad looks like a shell of its former self, like some post-apocalyptic city in the death of winter, and still victim to devastating bombing runs. All the while, cleverly encased in this war-movie exterior, is the soul of a sniper's daily trawl through the battle-ravaged city to pick off his targets and, eventually, face off against his ultimate nemesis.

Boys with their toys, eh? Sniper movies are always welcome in the male arena - not being without female fans - but their entourage still dominated by that Y chromosome. But ignoring the historical/war aspects of this film, does it have what it takes to make a good sniper movie? And what actually makes for a good sniper movie? Often the Hollywood depiction of snipers is a far cry from the reality of sharpshooters in the field, and one might assume this is a necessity to make the art more viscerally engaging. Now sure, designated snipers within special ops units may see the kind of action that we normally encounter in movies, but lone wolves (with their requisite spotters) seldom pick off six men in a row with headshots, instead normally having to wait hours if not days for that one shot, one kill. Sniper was a pretty good attempt at showing this, but Billy Zane's mid-way breakdown made it a little bit silly and derailed the drama somewhat; and Day of the Jackal gave you more of an insight into the methodology behind taking that kill-shot, albeit portrayed from a non-military angle. More recently, the extremely enjoyable but also pretty ludicrous Shooter showed us the epitome of 'entertainment by taking liberties with the truth'. Frankly, it is difficult to captivate an audience with a guy sitting, camouflaged, unmoving and waiting for his target to appear. Understandably, many yawn at the very thought of it. I'm curious as to what Mickey Rourke's infamous deleted Thin Red Line cameo would have been like - a depiction of a sniper who has remained in position long after he has run out of ammo, and has slowly gone insane. No, there often has to be a lot of dramatic licence when it comes to accentuating the realities of the art of 'sniping'. Enemy at the Gates, whilst also much more than just your average sniper movie, actually gave us the best of both sniping 'worlds' in this respect - without bending the truth too much. It gave us the taste of extremely good shooting at relatively close quarters - that quick-fix of headshots which so most sharpshooter-orientated movies have to include - but justified it by setting it during a massive military attack and giving the 'sniper' a mere 6-shot rifle to play with. It worked. Yet later, we also get a taste of what being a true sniper was about (albeit under extreme war conditions) with the same sniper crawling, sneaking, waiting and evading in order to get that one perfect shot. It married the visceral intensity - that in Hollywood would have needed to have been fabricated - with the slow-burning, tense stalking and waiting, and never drifted too far from reality in its depiction. The equivalent would be rare to find in Hollywood.

Containing battle scenes evocative of the horror of Saving Private Ryan's D-Day landing, as well as arguably the best 'sniper' scene ever depicted on film (and noted above), tense, dramatic, action-packed and enshrouded in a perpetual sense of unease, Enemy at the Gates remains a powerful and underrated war movie, and comes highly recommended.