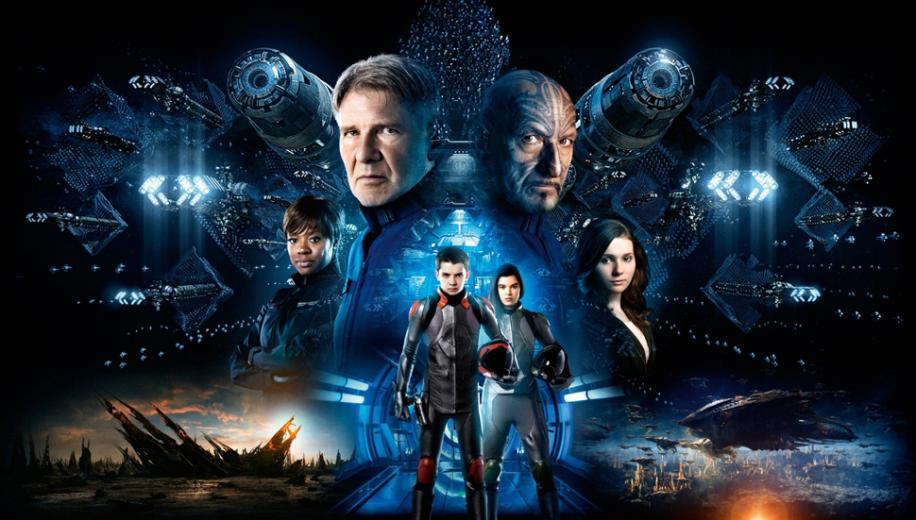 Ender's Game combines tactics, leadership, aliens and growing up in a story that often feels like a more child-friendly version of Starship Troopers.

Whilst it certainly has less space-nazis and gore than Paul Verhoeven's sci-fi satire, Ender's Game is also considerably more cerebral. The film is based on the popular series of books by Orson Scott Card and it raises some interesting questions about the use of child soldiers, first strikes and how far you're prepared to go to claim victory. The film stars Asa Butterfield (Hugo) as Andrew "Ender" Wiggin, a child prodigy who is trained by Colonel Hyrum Graff (Harrison Ford) to lead Earth's space fleet against an alien race called the Formics. Graff believes that Ender is Earth's last hope in the war with the Formics and is determined to exploit the boy's genius in strategic thinking, no matter what the cost. An excellent cast that also includes Hailee Seinfeld, Viola Davis, Abigail Breslin and Ben Kingsley are ably directed by Gavin Hood, who also adapted the novel.
The production design and special effects are very good and, in amongst the action set pieces, the film's narrative addresses some interesting subjects such as what actually makes a good leader. Unfortunately you have to wonder who the film is really aimed at because despite being made for teenagers it probably lacks enough action to ultimately retain their attention. This issue was demonstrated by the film's poor performance at the box office, which is a shame because it's refreshing to see a film that really makes you think. Ender's Game is well-acted, solidly written and quite thought-provoking, with an ending that will have you questioning the adults' actions long after the credits have rolled. Sadly the film's financial failure means we're unlikely to see any of Ender Wiggin's further adventures but at least there's this film to enjoy. Ender's Game was filmed digitally using the RED Epic at a resolution of 5K but it was finished using a 2K Digital Intermediate (DI), which presumably formed the basis for this Ultra HD Blu-ray release. The film was upscaled to 3840 x 2160p and presented in its correct 2.40:1 aspect ratio, the disc uses 10-bit video depth, a Wider Colour Gamut (WCG) and High Dynamic Range (HDR), and is encoded using the HEVC (H.265) codec. We reviewed the region free US Ultra HD Blu-ray release of Ender's Game on a Samsung UE65KS9500 Ultra HD 4K TV with a Samsung UBD-K8500 Ultra HD Blu-ray player, although the film has yet to be released on the format in the UK.

As result of the 2K DI there isn't any real difference in terms of detail between the Blu-ray and the Ultra HD Blu-ray, with the latter being upscaled to 4K for this release. Although the film was shot at a resolution of 5K, the effects were done at a resolution of 2K, making it prohibitively expense to re-render all the effects for this release. In direct comparisons, the Ultra HD Blu-ray does seem slightly better defined at times but since the film was captured digitally the original Blu-ray release was already a very detailed and pristine presentation. The Ultra HD Blu-ray retains this level of precision, delivering plenty of fine detail in the special effects, the costumes and the production design. There's no doubt that the film's budget is up there on the screen and the Ultra HD Blu-ray presents all that work in as much detail as the film's 2K digital intermediate will allow.

Since the film was finished in 2K, the major benefits of Ultra HD Blu-ray lie in its 10-bit video depth, wider colour gamut and higher dynamic range. The first two certainly appear to help with no visible banding in the film and well-saturated and realistic colours. However the HDR suffers from the same issues that affected the Ultra HD Blu-ray release of The Expendables 3. As a result the blacks appear a dark grey, instead of the deep inky colour we would expect from an HDR image. It's hard to say exactly what's gone wrong but it could be that the metadata has been encoded incorrectly, the video levels were set incorrectly or the wrong PQ EOTF was used for the transfer.

Whatever the reason, the problem is apparent as soon as you look at the black bars on this letterboxed image and is made all the more obvious in direct comparisons with the Blu-ray. This is a real shame because the benefits of correctly implemented HDR would have made the image even better, with plenty of opportunity for the deeper blacks and brighter highlights to give the visuals greater impact. The zero-g Battle School sequences in particular would have looked spectacular with the Earth and blacks of space in the background. We're unsure how the problem with both Ender's Game and The Expendables 3 got past the quality control at Lionsgate but the issues with these discs need to be addressed and replacements made available in our opinion. Ender's Game was released theatrically with a number of different soundtracks including Auro 11.1, Datasat, Dolby Digital and Dolby Atmos, with the latter being used for this Ultra HD Blu-ray release. We reviewed Ender's Game using a Denon AVR-X7200WA with a full 7.2.4 setup. This is a clear upgrade on the Blu-ray release, which only has a DTS-HS Master Audio 7.1-channel soundtrack. Whatever reservations we may have about the picture, the soundtrack is superb, with the sound designers taking full advantage of the Dolby Atmos format to immerse the viewer in the action.

The soundtrack has plenty of standout moments, with a rocket launch early on in the film really grabbing your attention. As the rocket ignites the soundtrack is filled with the roar of the engines and the sound radiates out through the room. The low frequencies really kick in and when the action moves to inside the spaceship the rattling and rumbling completely surrounds you, making you feel that you're inside the spaceship too. Then, quite suddenly, the sound completely stops as the ship arrives in orbit and coasts towards the approaching space station. It's a great example of the use of dynamic range – the difference between the quietest and loudest parts of the soundtrack – and it's very effective.

The zero-g sequences in the Battle School offer plenty of opportunity for the sound designers to take advantage of the overhead channels, resulting in a sound mix that completely envelopes the viewer. The sounds of lasers blast all around the room with effects being precisely steered around the sound field. However the dialogue always remains clear and focused on the screen, whilst the score is spread across the front three speakers, creating a wide front soundstage. Overall it's a very effective Dolby Atmos soundtrack and a great reminder of how a good mix can enhance your viewing experience.

The US Ultra HD Blu-ray release of Ender's Game comes in a black Amaray case with two discs, the Ultra HD Blu-ray and the Full HD Blu-ray. The Ultra HD Blu-ray doesn't use regional coding, however the Blu-ray is locked to Region A. The package also includes a digital HD copy of the film, although you probably won't be able to redeem the code in this country.

Audio Commentary – This is with director Gavin Hood whose knowledge about the film is encyclopaedic, bordering on autistic! His delivery is good natured and excited, with plenty of mostly technical information about the effects, sets, design, story developments, stunts, cinematography etc. The details are extensive but never boring, although it would have been better if there had been someone else there for Hood to bounce comments off.

Audio Commentary – This is with producers Gigi Pritzker and Bob Orci and by contrast their chat is far more relaxed. They do cover some of the same ground but from a different perspective which keeps it fresh and they have a good delivery and a great sense chemistry.

Ender’s World: The Making of Ender’s Game (49.04, HD) – A series of eight featurettes (Journey to the Screen, Recruiting the Troops, Ender in Zero G, Battle School Revealed, The Mind Game, Behind Enemy Lines, The Alien World and Ender’s Mission Complete) covering specific segments of the making of the film that can be played all together or watched individually. The title of each featurette reveals the areas they cover and they are best watched as one feature which explains the genesis of the project the struggles involved in getting it made. Just about everyone involved in the production gets some screen time, though the featurettes could have done with less film clips to pad out the run time.

Deleted/Extended Scenes (10:49, HD) – There are six deleted and extended scenes in total that can be watched individually or all together and with or without the director's commentary. Actually very little here (compared to how much must have been cut if you listen to the commentary) and all removed due to either pacing, or giving away the ending too soon, though there are a couple of character beats that might have improved the flow just slightly.

Inside the Mind Game (03:50, HD) – A look at the making of the computer game that Ender plays within the film. Ender's Game is an interesting, well made and thought provoking sci-fi film that raises pertinent questions about whether a first strike can be ethically justified and how far you're willing to go to win. The film is based on a popular series of novels and was adapted by Gavin Hood, who was also the director. An excellent cast led by Harrison Ford combine with impressive production design and effects to deliver a superior film aimed at teenagers. It might not have enough action for its target audience but it does present some fascinating ideas on what it is that makes a great leader.


A good film, a great soundtrack and a decent set of extras are spoilt by a flawed HDR picture

Sadly, despite being a good film, having a great Dolby Atmos soundtrack and a decent of extras, the Ultra HD Blu-ray release of Ender's Game is let down by a below par image. All the detail from the original 2K digital intermediate is presented on the disc, whilst the 10-bit video depth and wider colour gamut help deliver more realistic images that are free of banding and other artefacts. However there is an issue with the High Dynamic Range (HDR), with the blacks appearing dark grey instead, which sadly robs the image of much of its impact. It's a real shame because in all other respects Ender's Game is a great Ultra HD Blu-ray but when it comes to the picture Lionsgate have sadly dropped the ball.