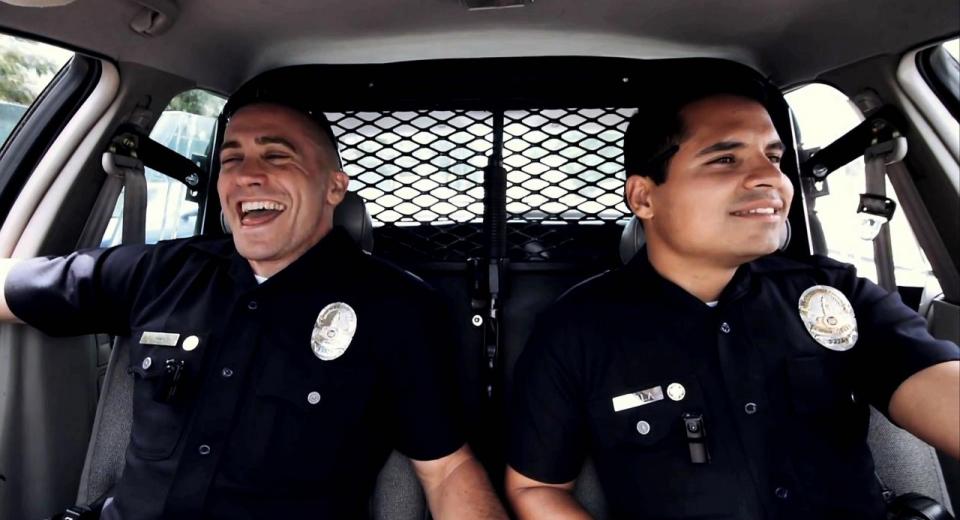 The disc presents a theatrically correct 1.85:1 1080p transfer using the AVC MPEG4 codec and is Region locked to B.

The film utilises a number of different cameras to give the documentary feel to the piece therefore the image can vary wildly between sources, at its worst (those scenes that used small digital capture) it is too vivid and overblown with clipped whites, but at its best (scenes using far more sophisticated cameras, usually for establishing shots or night shooting) it can look quite incredible. Taken overall the picture is quite excellent though; detail is sharp, with skin texture and clothing weave easy to pick out, and even though distance shots are rare, due to the nature of the filming, those that do occur hold edges all the way.

Colour is well maintained with all the primaries coming off very well, especially blue, just look at the gorgeous blue skies of LA with no hint of banding. Colours do, depending on the source, run a little ‘hot’ at times giving a slightly redder tinge than natural, but it is perfectly in keeping with the piece and is never bothersome.

Contrast and brightness, again, vary depending on the source, but for the most part are set to give excellent blacks which pushes the depth of the picture; however, the style of filming is, by its very nature, flat, so don’t expect any 3D pop. Overhead, or landscape, night-time establishing shots showcase the best blacks, where the city lights are pinpoints of accuracy in a sea of ink. The handhelds do tend to grey a little, but not by much, though they do tend to hide the deepest shadow detail in lowlight noise – but, again, in keeping with the piece. Whites occasionally clip, especially in the outdoor shooting with the handhelds, much as digital recordings are wont to do, but it feels natural to the picture, so is never a problem.

Digitally there are no compression problems or edge enhancement, nor is there any banding. Any artefacts are purely a condition of the source material and not a fault of the disc. I opted for the English dts-HD Master Audio 5.1 surround track. For a PoV style shoot this is actually quite an absorbing soundtrack with plenty of detail and attention to detail that helps to draw you into the film. Dialogue is natural sounding and spread across the frontal array. Effects can be myriad, such as the noise from the street, or engines running, distance city noises etc. and add to the ambience very well. When the action builds up the sound mirrors it, becoming very dynamic and wide and producing a sense of urgency. Bass is deep and strong with the LF effects coming thick and fast with gun shots, and engine noise. The score, though, makes the most use with some of the ultra-heavy bass tracks pushing the limits of the lower end. As with the visuals the sound is there to create a sense of ‘being there’, so whilst it might not be the most pinpoint accurate with this surround steering, it feels natural and that is something special. David Ayer’s End of Watch is an often brutal and uncompromising (almost) look at two officers in the LAPD and their daily grind against street gangs, depravity, destitution and drugs and the camaraderie and companionship that blossoms between partners facing such situations. Eschewing the typical ‘Hollywood’ version of the Police Force by taking a stark look at their daily duties (be that patrol, civilian/community relations, holding a crime scene while forensic or detective teams complete their work or other ‘mundane duties’) as well as some of the more ‘exciting’ (or in this case deadly) situations they can find themselves in, there is a marked intention to provide ‘TV Realism’ rather than ‘Filmic sheen’ to the production. Using the Point of View method of filming to place the audience in the thick of the action, the film is both powerful and dynamic, but by also adhering to a typical filmic structure (and also employing occasional traditional filming methods) of building to a climax it becomes richly rewarding in its own right. Jake Gyllenhaal and Michael Peña give outstanding performances in the titular roles and they pretty much carry the movie as it is our perception of them that allows the drama to unfold. Once the details are set, the execution in the latter third does falter slightly and the powerful conclusion could have been better had they gone with the ‘alternative’ outlined in the extras, but that is not to take anything away from what is an excellent film that, for the most part, hits all the right points.

As a Region B locked Blu-ray set the Steelbook package contains an excellent, bright and clean picture, barring the nature of the cameras used, a dynamic and powerful surround track with extras that just about make it past the starting block helped immeasurably by the audio commentary and Q&S session. In all a pretty good set.