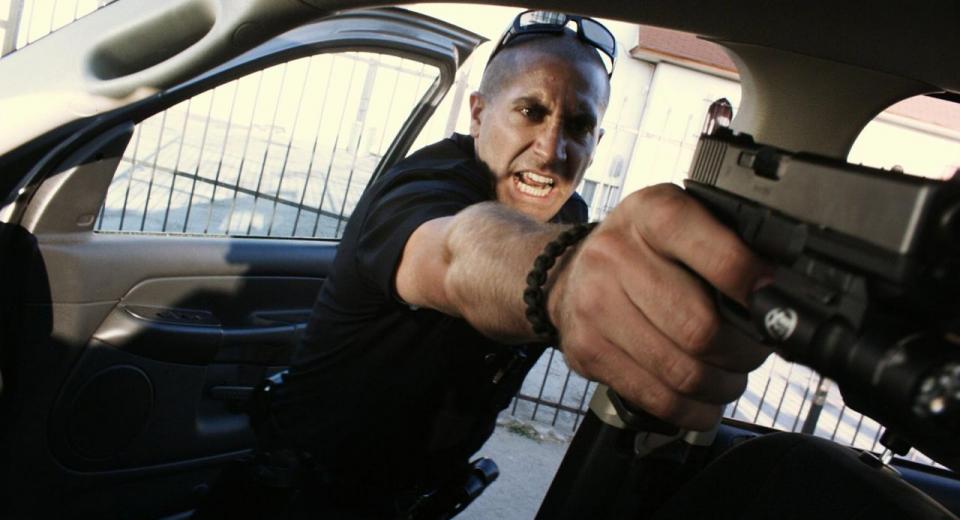 I’m not sure I could be a police officer. From the myriad of TV shows’ depicting what goes on in a typical day, from traffic cops to street beat to drug and related crime to white collar fraud or simply dealing with drunks on a Friday night – they all see the worst that humanity has to offer. And despite claims that crime rates are actually falling if you are on that thin blue (front) line humanity’s capacity for crime must seem undiminished. Imagine then what it must be like in America, specifically downtown Los Angelis, where gang warfare is rife and life is as cheap as your next drug fix. Imagine having to try and police an area where every suspect has the potential to carry a gun and retaliation could be deadly. It is in this dark and seedy world on which tonight’s feature shines a light, and it can, at times, be quite shocking to see the inhumanity that is dealt out, and which our protagonists have to deal with every single day they put on their badge. I don’t think I’d have the courage to face it. Not alone. So get your partner, strap on your side arm and steel your resolve, for tonight we look at End of Watch; a brutal and uncompromising (well almost) depiction of life as a beat officer in the Los Angelis Police Department.

The film starts off like any of the reality cop shows mentioned above, the camera is on the dashboard of a police car filming the point of view action during a car chase, complete with speed and time stamp. Not only is this a particularly dynamic way to open a film as it cleverly details the neighbourhood that the film takes place by showing the typical locations of a typical day, but it also introduces the way the film is going to be shot. As the credits end and the film proper starts we get our first glimpse of our protagonists and the reason they gain a commendation as well as greater respect of their peers. We are also told why the movie footage exists, one of our team is filming their everyday activities for a film project and thus everyone is under scrutiny from his fellow officers, to those on the street, much to everyone’s chagrin. The opening scenes explicitly explain this as various cameras are also introduced from covert lapel to handheld camcorders with each capturing all the events as they unfold – it’s rough, ready, meant to be ‘in the action’ and very dynamic. Obviously this is not a new technique, indeed there have been a proliferation of PoV camera films (Cloverfield and REC to name just two) and they can take a little getting used to, the frenetic camerawork, at times, becoming too overbearing, but when taken seriously and filmed well (the aforementioned films) they can heighten tension and add much to a film’s power. Unfortunately the opposite can be true as lesser films are wont to point out (The Dinosaur Project). What makes this film work so well is director David Ayer’s attention to detail with regard to the characters and story elements and his using this PoV filming technique alongside traditional filming methods – thus his story is told by combining both the ‘realistic’ and the ‘third person’ in a wonderful meld that skilfully blurs the line between truth and fiction.

So what of our protagonists, well they are, obviously, two police officers (actually loosely based on real life LAPD Officers Charles Wunder and Jamie McBride) named Brian Taylor and Miguel Zavala. Taylor is introduced first, he is an ex-marine who relies on his training and wits, not a typical ‘jarhead’ his years of experience and training allowing him to judge situations well, and act very quickly, he shows very little fear and is fiercely loyal to both his friends and the department he works for. It is his film project that allows the excuse for all the camerawork. His partner, Zavala, has had a very different life, clearly presented with several choices in his early life he chose to avoid crime and follow justice, he became a police officer – though trained he has greater compassion than his partner, and because of that he acts first and thinks of consequences after (such as running into a burning building to rescue the occupants rather than hold off for back up). But together they are a near unstoppable team, both having a great respect for each other and both relying on the other for their lives – they camaraderie is second to none, they are friends, more than that, brothers who will follow each other into the shadow of death, for together they fear no evil – they may make reckless choices, but they are not reckless by nature. We spend a lot of time with these two, whether it be in their briefings, family engagements, parties or just sitting with them as they discuss life while on patrol. Their bravery wins them respect and awards and we, as the audience, are moved with them.

However, as the cameras show, they are not against meting out their own justice. On a routine domestic disturbance callout, the man of the house hurls racist abuse at Zavala, but rather than make an arrest he decides to fight him instead, eventually winning. This earns them a deal of respect within the gangland fraternity as they never reported the fight. But it is an insignificant amount compared to the abuse they suffer on the streets every day. The profanity spoken by everyone, including the police, is quite astonishing. And the ‘street talk’ can, at times, be very difficult to understand, what with strong accents and gutter talk and profanity every other word. And our intrepid duo deal with this type of behaviour day in, day out. It is wearing just watching it in a fiction such as this, to actually deal with it in real life must be utterly soul destroying. Little wonder that the police form such a close bond with each other and respond the quickest when one of their own is targeted.

Love or loath David Ayer his writing can be very hard to stomach at times (previous directorial examples including Harsh Times and Street Kings, that while not great films are typically brutal, and his writing expands even more, see Training Day or even Dark Blue) and End of Watch is no exception. But the day to day grind that our protagonists face hides a slow pot boiler of a thriller that will have an inevitable outcome. A routine traffic stop leads to a massive drugs and weapons haul being confiscated and when the driver turns out to be a leading man in a drugs cartel, the seized contraband is just the tip of the iceberg as Taylor and Zavala investigate (against instruction) they find human trafficking, sex slaves and drug manufacture. Some of these discoveries are truly horrific, based, as they are, on real life. The inhumanity is astonishing as is the lengths that the cartels go to, to protect themselves. And as our intrepid duo delve further into the darkness the repercussions have far reaching consequences. It is a powerful and moving piece, but in what was probably the only concession to the studio, the climax plays it safe and, in my opinion, weakens the whole – look for the alternative ending which is far starker and more realistic and would have left the film with a far darker ending, something which studios are loathed to do.

However, it’s not all bad, the performances are excellent throughout. Jake Gyllenhaal (as Taylor) has the working man’s hero down to a tee and is at his very best when not taking an heroic lead (think more Zodiac than Prince of Persia) and puts in an excellent portrayal of an ex-marine turned police officer. He is naturally charismatic, funny and charming – yet there is a hardness behind those eyes. Watch him melt with the new love in his life but harden to stone when things turn nasty on the streets. Michael Peña (as Zavala) is going from strength to strength and effortlessly portrays the working man’s officer and family man. But what really makes the relationship work is the effortless chemistry between these two men – their banter towards each other and the rest of the squad is infectious and this is where the heart of the film lies. The layered plot encompasses much that the police have to deal with on a daily basis, but it is the boys camaraderie with which we side and no matter what horrors they have to deal with, we are happy to join them since we have gotten to known them so well – thus when their fate is thrust upon us we really feel it, much as the officers in their own platoon do so.

End of Watch can be brutal, but it can also be touching – juxtaposing the horror of the street against the clear joy of life can be a powerful story telling device and when you are in the thick of the action with the PoV camerawork it can be exhausting. But stick with it and, contrivances notwithstanding, there is much to be rewarded with and it might just be Ayer’s best film to date. Recommended.