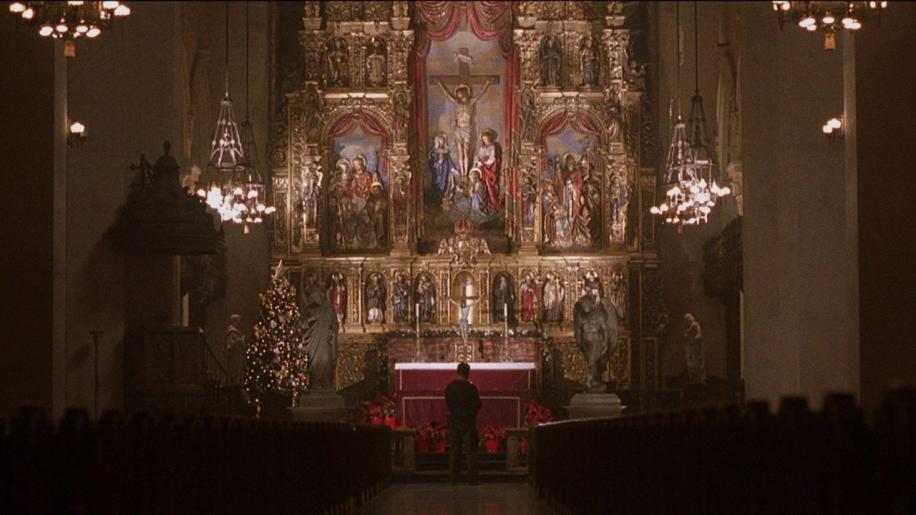 Universal continues to re-issue what was once red in their shiny new blue boxes. This is the third Universal re-issue that I have had the pleasure to review (after The Mummy, The Mummy Returns and U571. So far, I have been pretty impressed with the effort that the studio has put into the Blu camp and the discs so far have been as good as - and in at least one case, actually better than the HD DVD version.


The Oak plays an alcoholic ex New York City police officer now working as a close protection security guard. Set at the turn of the last millennium, you'll probably remember that it was an uncertain time for users of anything that had a computer chip in it - namely just about everything. The problem was that at midnight on December 31st 1999, the chips wouldn't be able to recognise the date and would shut down. A huge problem if the aircraft you happen to be flying home in at the time was controlled by a computer chip...but as we now know, it was all speculative hype and life went on.

The problem is, in End of Days, Arnie finds his own millennium problem in the form of the devil. Satan has returned to Earth in the shape of Gabriel Byrne to mate with an innocent woman (played by Robin Tunney), who would then go on to have more kids so that Satan could kind of set up shop and rule the planet.

Arnie takes it upon himself to protect the girl. As a kind of sub plot, his character has recently lost his wife and child to an armed gang that broke into his house. This causes him to lose faith in God. At the same time, he uncovers a kind of sanctuary for religious phenomena under a church in Times Square. The head priest, played by Rob Styger, tries hard to get him to believe again - but to no avail. Satan of course plays on Arnolds weakness of his grief and offers to bring back his wife and child in return for handing the girl over. He may be a drunk, but at this moment in time he's out of White Lightning so quite sober - there's no way he's giving up the girl without a fight...and so The Oak meets Satan on New Years Eve 1999 in Times Square - winner gets the world...

It all sounds rather good, doesn't it? But in all honesty, it's a poor film - and it's all down to the casting of the leading man. I often hid behind a cushion during the film - but it wasn't in terror or fear. It was because I just couldn't watch the iconic action movie star embarrass himself with trying to act - because no matter how much you argue, the bottom line is - Arnold Schwarzenegger can't act. There - said it. I'll admit he was brilliant in Terminator 1 & 2. But these films required very little acting because his character was devoid of all emotion. In this, we get Arnie crying, Arnie upset, Arnie drunk - and they're all the same. I'm ashamed to say that what went through my mind was the episode of Blackadder Goes Forth where Baldrick puts on a bowler hat, balances a slug on his top lip, leans backwards and is convinced he's Charlie Chaplin! Arnies facial expression just doesn't change no matter what emotion he's doing. Add to that the lamest rendition of Satan I've ever seen in Gabriel Byrne, and it spells disaster movie rather than horror movie.

And it's a shame - because underneath is a pretty decent story. Had the casting crew given this a little more thought, then I believe this would be a different movie altogether.

There must be some charm in the big man though - every Christmas, my twenty year old son scans the TV guide for Arnies second biggest disaster Jingle All The Way. When I ask him why he loves it so much, his answer consists of reminding him Christmas when he was younger and the fact that it's “got Arnie in it”. I would imagine that if you a die hard of the big man, then this film is a must for you.

Director Peter Hyams manages to keep the story moving along at a nice pace and is helped out by a brilliant special effects team. The film is dark and gritty and at times, quite shocking. Robin Tunney, who's character is called Christine York (Christ in New York supposedly) is probably the best of a bad bunch when it comes to the leading players. Only 19 at the time of filming, she seems to have drifted away from the big screen a little in recent years and is now making more and more TV shows - pity.

Try as I might - and I did try, I just couldn't force myself to like End Of Days. I never thought that I would turn away from a film because it had been spoilt by one of my favourite Hollywood stars. But in all honesty, this could have been so much better had somebody - anybody else in fact had been cast as the alcoholic ex New York cop who tries to save the world.

I can only recommend the film to devoted followers of The Oak I'm afraid - one of which I actually thought I was - until I watched this...