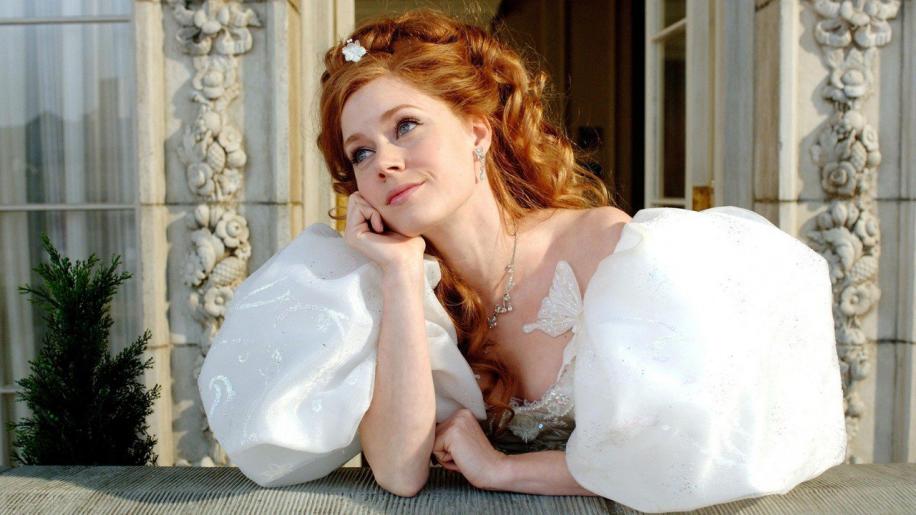 One of the joys of parenthood is you get to relive your childhood, either metaphorically by watching your offspring play or literally by getting in there and playing with them. Nothing beats becoming a kid again, free of inhibition with a wide eyed innocence and the simply feeling of joy. So imagine my surprise when, out of the blue, that simply feeling from watching a film washed over me. It's good to know that the kid in me isn't as jaded as the adult body I inhabit. Tonight's feature, Enchanted, is a Disney film that harks back to their golden years and takes an idea so obvious one wonders why it's never been done before. With the films title perfectly summing up the whole this is a film aimed at the younger audience but with enough empathy to enrapture adults without the need for coarse (or otherwise) language or situations. Put simply Enchanted is enchanting.

The plot is one of a hundred fairy stories; wicked queen wants to retain power and to do so must remove the sweet girl she perceives as a threat. Pretty standard stuff; even the characterisation is exactly how you imagine it should be, Queen Narissa (Susan Sarandon) is draped in black, disguises herself as an old hag and transforms herself into a dragon, while the girl, Giselle (Amy Adams) is sweet and innocent, can talk to the animals that help her though her daily chores and dreams of 'true loves first kiss'. The film starts off in traditional animation, even looks hand drawn with bold strokes and strong colours. In true storybook form the narrator (Julie Andrews) tells us the outline of the film and introduces us to the main characters. Giselle is singing about a handsome prince as she builds a statue of him, while the prince in question, Edward (James Marsden), fights trolls while the slimy Nathaniel (Timothy Spall), in thrall to Narissa, keeps track of him. Chance intervenes and the pair do meet up and instantly fall in love and agree to marry, much to the chagrin of Nathaniel and pure hatred of Narissa. Transforming into the old hag, Narrissa plunges Giselle into a well. But this is no ordinary well. This well is a gateway between the fairy tale land and real life as we know it. The gateway leads to a sewer cover in the middle of New York. And here is where the film really opens up. Quite literally from 1.85:1 aspect to 2.35:1!

When Giselle steps from the manhole the world becomes a wash with sound and colour assaulting her (and us) from every angle. She, of course, still dressed in her wedding gown is confused and struggles to find her way, the citizens of the city keeping a wary distance, and try as she might she cannot find the way to the castle, the billboard she tries to enter notwithstanding. It is at this point when her knight (of sorts) comes to her rescue; Robert Philip (Patrick Dempsey) is a divorce lawyer and divorcee with a small child Morgan (Rachel Covey). Pandering to his little girls desires Robert agrees to take Giselle home, clean her up and send her on her way, but when she falls asleep he ordains to let her stay. When she wakes, however, it seems she still has her fairy tail charms and whims, getting pigeons, rats and flies to help her clean up the house. And with her wide eyed innocent and natural joyful charm wins over Robert's hardened real world nature. Though the winning goes both ways, Giselle being more than a little interested in the aspect of 'dating', insisting, when Edward finally finds her, that they go out on one to discover more about themselves. It all comes to a head at a glamorous ball, in true climatic fashion, with swords, dragons and happy endings.

Director Kevin Lima and writer Bill Kelly have fashioned a perfect modern day fairy tale based on all the classic Disney stories. All the characters are based on an amalgamation of characters from past films, all inherently familiar but all with a life of their own. Giselle is really all the major Disney princesses rolled into one, but the overriding ensemble is that of Snow White. Adams does a glorious take on the character imbuing her with a childlike charm without being sickly; her bright wide eyes, simple outlook on life and sheer unrelenting enthusiasm is absolutely captivating; even when she is excited about being angry her bouncing between the emotions is captivating. We warm to her instantly and are always on her side, like a child's comfort toy we simply cannot feel anything but love for her. Her warm presence and colourful backdrop are what carries the film forward. When we are introduced to Robert, his world is mainly back and white, his outlook on life being coloured the same way. Bringing up his daughter alone and working as a divorce lawyer, his outlook on life is somewhat jaded, he cannot see the magic around him (in much the same way as all adults in Disney films cannot) and tries to instil in Morgan a realisation of life; gifts like 'Real Women' books intended to teach her to grow up strong and independent rather than allowing her to live as a child with her fairy tales and romantic notions on life. It takes Giselle to finally open his eyes to what he really has. Their pairing up is set right from the off, the film is quite obvious to that fact, but is played with such warmth that we want it to happen. Edward's intervention comes as a thorn in their and our side; even though at the beginning we are championing his cause.

The other main characters, Edward, Narissa and Nathanial are somewhat incidental when compared to the pairing of the main two, however their characterisation is no less thought out. Narissa is a combination of all the major Disney witches, though her direct inspiration is Maleficent from Sleeping Beauty (1959). She is typically wicked, dressed in black, scheming and evil. Sarandon captures that essence perfectly even if by that very nature she is somewhat one dimensional. In fact, Edward too is somewhat one dimensional, once again an amalgamation of Disney's prince's, themselves rather one dimensional, their purpose being to defeat the evil and win the girl. However, here, Edward doesn't have to do either of those things and whilst Marsden does give the character something to hold on to, being likeable and charming, he nevertheless doesn't have much of a journey and even though he gets his happy ending his story is rather pushed to the side. Not quite so with Nathanial, however, he does have some emotional depth given; at first he is nothing but the evil bumbling henchman seen in so many Disney films (though his actual inspiration is somewhat enigmatic) but once in the real world he questions his role and eventually rebels against it. It's a short journey but one that runs kinda parallel with that of Giselle's.

Of course there are plenty of references to past films, from talking animals to plot devises, and all are used with unashamedly. One such is the use of the poison apples; forget any religious overtones, this is a staple Disney device and instantly recognisable and one that is used to prove 'true loves kiss'. When the outcome is so obvious but nevertheless wanted you really do have to smile. One of the strongest selling points are the songs threaded throughout the film. With original Disney song writers Alan Menken and Stephen Schwartz, with such credits to their respective names as The Little Mermaid (1989), Beauty and the Beast (1991), Aladdin (1992), Hercules (1997), Pocahontas (1995) and The Hunchback of Notre Dame (1996) the film had a huge pedigree; and their influence is immediate. The original songs sound so much like traditional Disney that you swear you've heard them before. They are happy, jolly and enjoyable and when put to the film the visual accompaniment works seamlessly. Be it the CGI vermin clearing up the house in Happy Working Song, or the magnificent That's How You Know and its outlandish but awe inspiring dance routine are watched with wonder.

You can probably tell I have a very soft spot for this film. It doesn't pander and it isn't sickly sweet, but is traditional Disney as we all remember it. The myriad of references, the simpleness of the story and the sheer wonder of the spectacle are captured perfectly by Lima and his team.

One for the kids?
Definitely.
One for the adults?
Absolutely.
Have Disney got it right once again?
Without a doubt.
Highly recommended.