"In time, every member of our family was given their own magical gift." 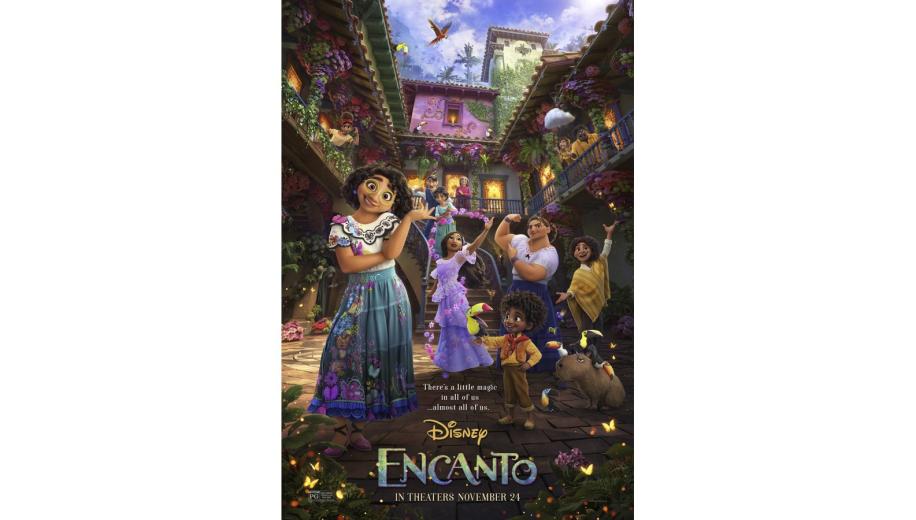 Having contributed toward the songs in what is arguably Disney's best modern feature - Moana - the unstoppable Lin-Manuel Miranda provides the lyrical backbone to their latest colourful family feast, a Columbian-flavoured romp with lots of toe-tapping spirit.

Miranda has infused a number of successful movies with his inimitable musical cadence, from Moana to his breakthrough Hamilton, to Warner's In The Heights, Sony's Vivo and Netflix's Tick, Tick... Boom, crossing the spectrum of studios but remaining very loyal to Disney across the years, and providing the songs (and co-writing the story) for their latest - and 60th - animation, Encanto. It's a tried-and-tested formula that he brings, and the songs are arguably Encanto's greatest asset, with Disney drawing in yet another culture into their increasingly diverse umbrella with commendable passion.

... a heartwarming, if safe, addition to the Disney fold

The Madrigals are a magical family - literally - protected by a sacred eternal candle, offering hope to their entire, protected, village. But daughter Mirabel, despite being the heart and soul of the family, has no powers, leaving her frequently pushed to the side, not least when the youngest new addition to the family has his ceremony to receive his powers. When cracks starts appearing in their household however, and the flame starts to waver, it falls to Mirabel to save the family - not least because everybody thinks it's her fault.

Encanto is a heartwarming, if safe, addition to the Disney fold, rich with all of the trappings of another lovely family adventure, and brimming with some excellent song tracks which - over time - may prove to be quite memorable. Its characters are colourful but unique, and each afforded, over the full duration of the runtime, a rounded depiction. Mirabel is the core of the piece, and Brooklyn Nine-Nine's Stephanie Beatriz is excellent in the role, brimming with passion and conviction and concern, and pretty impressive on the singing front too.

Surrounded by relatives with special gifts, it's easy to see the message of the day, and perhaps this is where the traditional Disney magic seems a smidge off - the tale of everybody being special in their own unique way, however underacknowledged, is almost too trite for their sensibilities, and certainly telegraphed from the outset, robbing the resolution of any surprise. That said, perhaps it doesn't matter so much, and that Encanto does not quite have a discernible "Disney moment" is not the end of the world (Disney/Pixar's Luca had a similar issue), with the intoxicating music and warm family heart underpinning an extremely sweet and endearing feature.

... that Encanto does not quite have a discernible "Disney moment" is not the end of the world, with the intoxicating music and warm family heart underpinning an extremely sweet and endearing feature

For those who haven't seen a Disney movie at the cinema for a couple of years now (since, well, Frozen II), there's a strong argument to be made that this will be something of a must-see, with younger audiences suitably entranced by the colourful majesty of the production and safe adventure thrills it afforded - dominated by musical numbers that will suitably wow. But the decision to announce a pre-Christmas Disney+ release should be a consideration to some, and Encanto may well be best served on a cold Christmas Eve, snuggled up with the fire on. It may not be quite prime Disney but, on the Eve of Christmas, none of that will matter.

Encanto is in cinemas now and is scheduled to be released on Disney+ on 24th December 2021.