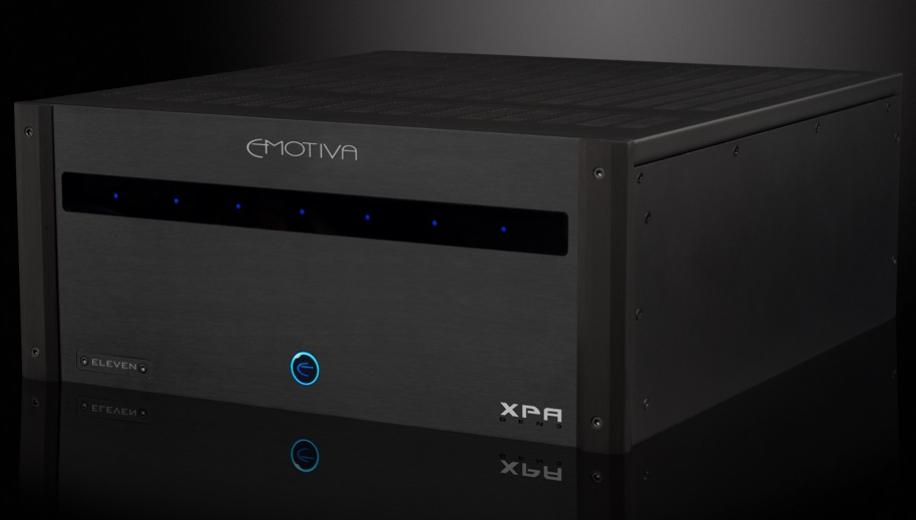 The Emotiva XPA-11 Gen3 is an 11-channel power amplifier from a US manufacturer that specialises in building affordable high-end products. The third generation of Emotiva's XPA range of power amplifiers uses an ingenious modular design that allows owners to gradually increase the number of channels as they build their system.

It also affords certain economies of scale, due to the amps sharing the same basic chassis and layout, with only the combination amplifier modules changing. Emotiva offers a choice of 2-, 3-, 5-, 7-, 9- and 11-channel amps, but the beauty of the modular design is you can start at 2-channels and add more as your system grows.

Aside from the modular design, Emotiva’s other innovation is a high-efficiency power supply that allows the amp to dynamically deliver power where it’s needed. Emotiva’s products are also competitively priced, with the XPA-11 only setting you back £2,399 as at the time of writing (May 2020), making it the cheapest 11-channel amp currently available.

The Emotiva XPA-11 Gen3 is surprisingly attractive for a power amplifier. The chassis itself is extremely well made, with a heavy-duty steel construction, a brushed aluminium faceplate and a matte black finish. There are seven LEDs and an illuminated power button, which all glow blue when the amp is on, helping to jazz up the front panel. However, if you’re going to find these lights distracting, there’s a button at the rear that turns off the LEDs (although not the power button).

The front panel is surprisingly good-looking, it's extremely well made, and there's a full set of connections at the rear

When you consider there's 11 channels of amplification in the XPA-11, it shouldn't come as a surprise to discover it's fairly large – with a chassis that measures 432 x 203 x 483mm (WxHxD). Due to Emotiva's modular approach, all the XPA amps use the same chassis so even the 2-channel version is the same size. However, despite the size and build quality, the XPA-11 only weighs 24kg, which is due to the efficiency of the dynamic power supply.

At the rear you’ll find all the connections: these are composed of eleven sets of unbalanced phono inputs and eleven sets of balanced XLR inputs (the locking type). There are independent switches for each of the seven modules, allowing you to choose between the phono and XLR connectors.

Note: Despite what it says in the manual, the XLR inputs have reversed hot and cold pins compared to the European XLR standard, so to avoid any polarity issues you should reverse the positive and negative terminals when connecting your speakers.

There are also high quality binding posts for connecting the speaker cables, and you can choose between bare wire, spades or banana plugs. Finally, there are remote input and output triggers, allowing the XPA-11 to control and be controlled by other trigger-enabled equipment, along with the button for turning the front LEDs off.

The Emotiva XPA-11 Gen3 forms part of the company's third generation of power amplifiers. These employ a modular architecture, with each amp using the same heavy-duty steel chassis on the outside and a choice of customisable Class A/B amplifier modules on the inside. You can choose the number of modules you need when first purchasing your XPA amplifier, but also add more later – up to a maximum of seven modules – by sending your amp to Emotiva for an upgrade.

There’s a basic 300W mono module and a 2 x 65W stereo module, and room for between two and seven modules. A single chassis can be configured with anything from one channel at 600W to fourteen channels at 65 watts each, allowing you to gradually upgrade your amplifier as you expand your system. In addition to the modules, the chassis also houses the switch mode power supply (SMPS), and protection and control circuitry.

As you can see in the images, the modules slot in at the rear, and there are also corresponding status LEDs on the front for each installed module. There's a variety of module combinations, depending on the number of channels in the amp, but the XPA-11 uses a total of seven: three mono and four stereo modules. These deliver 300W into 8 ohm or 550W into 4 ohm for each of the front three channels, and 65W into 8 ohm or 100W into 4 ohm for the other eight channels.

The modular design allows the amp to grow with your system, while the power supply is more efficient and dynamic

This configuration makes perfect sense – the front three channels require the most power because they're critical for music, creating a solid front soundstage, and producing clear dialogue. The remaining eight channels handle all the surround and overhead or height speakers. Each channel of amplification utilises a fully analogue Class A/B output stage originally developed for Emotiva’s first and second generation XPA amps.

Aside from the modular design, Emotiva’s other major innovation relates to the amplifier's power supply. The XPA amps use a specially designed, high current, switch mode power supply (SMPS) that allows for substantial long term power capacity combined with significant short term dynamic power reserves. This approach not only delivers power wherever it's needed in the system, but also reduces the weight by 30%, and generates less heat – so the amp runs cooler.

In addition, Emotiva’s Soft-Switch Class H power supply topology significantly increases the efficiency by using a lower supply voltage at lower power levels. However, when a fast rising input signal is detected, it instantly switches to a higher voltage rail to ensure the signal can pass cleanly without clipping. This dynamic amplification that responds to the requirements of the system is very similar to the Class G amplification Arcam uses in its amps.

The Emotiva XPA-11 Gen3 was tested in conjunction with the Lyngdorf MP-60 AV processor running in a 7.2.4 configuration. The three mono modules in the amp were driving the front left, right and centre channels using MK Sound S150 speakers. The four stereo modules were driving all the other channels using MK Sound S150T tripole surrounds at the sides and rear, and four JBL Control Ones overhead. The bass was handled by a pair of MK Sound V12 subwoofers.

At first glance the claimed power numbers for the XPA-11 might seem underwhelming, but it was immediately apparent that Emotiva is being conservative in terms of this amp’s performance. The 300W for each of the front three channels is certainly sufficient, and the switching power supply ensures that any additional energy is routed to where it’s needed. As a result, the amp is more efficient and surprisingly cool in operation.

Emotiva’s use of a Class A/B amplification combined with a switching power supply is very similar to Arcam’s Class G. Coincidentally, my previous reference system was based around a combination of the Arcam AVR850 7-channel AV receiver and P429 4-channel power amplifier, both of which are Class G. While both systems share a similar level of power and transparency, I did feel the XPA-11 produced a more exciting delivery, with a greater sense of dynamism.

I started my review using a 24-bit/96kHz uncompressed stereo version of Roger Waters’ 1992 album Amused to Death. I was immediately impressed with the exceptional detail and dynamics produced by this amplifier. The XPA-11 skilfully handled the complex mix, with the sounds of monkeys erupting at the start of What God Wants, before the driving drum beat kicks in and Jeff Beck’s guitar weaves its way across the stereo soundstage.

Switching to a high-resolution 5.1 version of the same album, the amplifier expands its delivery to fill the soundstage with this immersive lossless surround mix. Instruments are placed around the room with exacting precision, and the XPA-11 delivers tight bass and a clean treble. The dynamic range is exceptional, as demonstrated with the explosion in Late Home Tonight, but the amp is also incredibly responsive, as evidenced by the sudden silence that follows the blast.

A favourite test disc of mine is Edge of Tomorrow, which has a lively 7.1-channel mix. The repeated beach landing immerses you in the chaos of the assault, and the Emotiva rose to the challenge, energising every channel. There are explosions and missiles flying all around you, but the amp never breaks a sweat as it keeps pace with the action. It’s effortless, and the added headroom means you can crank up the volume without worrying about distortion.

However, the XPA-11 isn’t just about producing a big and powerful soundstage that can handle all the explosions like the sonic equivalent of a sledgehammer. It’s also capable of retaining a pleasing amount detail within its muscular delivery, as a result different effects are clearly defined, while voices and dialogue remain intelligible during the ill-fated landing. The Emotiva isn’t always the most refined performer, but who wants that from an 11-channel power amp?

It not only delivers raw grunt in spades, but turns on a dime to ensure the power is delivered where it's needed

Having established the XPA-11 is capable of effortlessly handling 2-, 5- and 7-channel soundtracks, it was time to start driving a full 7.1.4 system. Le Mans ’66 is the perfect film for this task, not just because it involves a lot of driving, but also due to a wonderfully immersive Dolby Atmos soundtrack. This mix doesn’t mess about, and the Emotiva rises to the occasion with a muscular performance that perfectly matches the powerful racing cars on screen.

The titular race is dominated by the sounds of roaring engines, which this amp reproduces with a ferocious intensity. As race cars roar seamlessly across the room, from side-to-side and front-to-back, the amp moves them with a forceful precision. The entire soundstage is energised in certain scenes, with the ceiling speakers seamlessly joining the surrounds to create a wall of crowd noise, or when a plane flies directly overhead.

More: Immersive Audio - What is it?

Jumanji: The Next Level has a dynamic DTS:X soundtrack that makes full use of all the available channels. The XPA-11 handles this energetic mix with skill, from the pounding drums that announce a new challenge in the game, to a charging herd of ostriches that surround our heroes. The amp ensures the side and rear speakers are fully engaged, immersing you in the action and bombarding you with effects from every direction.

There are a number of sequences where the sound designers actively employ the overhead channels, such as when a character is re-spawned. There’s a clearly audible sound effect overhead, before they come crashing to the ground. A challenge involving rope bridges at different heights allows sounds to be moved up and down in unison with the characters, and as a zeppelin drifts overhead and crashes into its mooring, the amp ensures each channel is suitably energised.

The Emotiva XPA-11 Gen3 is a fantastic 11-channel power amplifier. It delivers forceful grunt where it’s needed, and does so with efficiency. It has more than enough power to drive even the most demanding system, while also remaining highly responsive.

The XPA-11’s amplification is balanced and detailed, but also produces plenty of headroom – so, even at high volumes, it never distorts. It’s not always the most refined amp but that’s missing the point, and those looking for a powerful and muscular delivery will be delighted.

It's extremely well made, with an attractively designed chassis and modular approach that allows owners the option of gradually adding channels as their system expands. The Emotiva XPA-11 is also competitively priced, currently making it the best-value 11-channel amp and a definite best buy.

When it comes to 11-channel power amps, your options are limited. In fact there are currently only two choices: the Emotiva XPA-11 Gen3 or the Yamaha MX-A5200. The latter is more expensive at £2,850, but offers similar levels of build-quality, connections, flexibility and power. You can read the full review of the MX-A5200 here.