"Emma, you should not make matches, or foretell things. Whatever you say, always comes to pass." 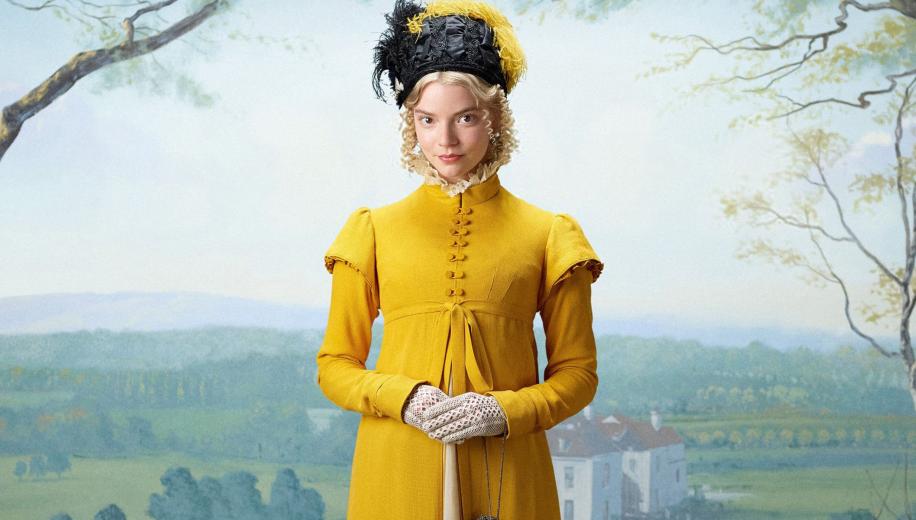 Alongside The Hunt and The Invisible Man, Emma (technically, Emma.) is the third of the flagship Early Access Premium Rentals to land this week in an attempt to keep 'theatrical' Box Office going during these troubling times. It's a colourful, playfully pantomime romp whose style sits in the same whimsical arena as the admittedly darker period romp, The Favourite, poking fun at the farcical airs and graces of these rich and pompous characters, whilst reworking the classic tale of matchmaking mayhem for a modern audience to delicious effect.

Emma Woodhouse gets great pleasure moving other people around like chess pieces, playing out fun mind games in an effort to amuse herself, and often securing suitable matches for her victims in the process. But her latest situation is complicated by her own vested interests, as she loses a companion in her departing, now-married, governess and thus becomes conflicted between finding a soulmate for her friend Harriet, or remoulding the naive young girl as a new companion to keep her company herself.
﻿

﻿This change to the 'theatrical' model - albeit by a forced hand - is an interesting proposition, and whilst the cost seems high, it's probably a reasonable proposition in comparison to a couple let alone a family cinema outing. The bigger question remains over quality, particularly in light of the dropping of resolution to alleviate the surge in video conferencing from everybody now working from home, with the Sky Store offering SD on its app, or HD through the box, and Apple TV providing HD right out of the gate but suffering from what appears to be the worst examples of dropped resolution across all platforms (Netflix remains comparatively untouched). Their recent Apple TV+ original movie, The Banker, was horribly SD in delivery, barely watchable on a 4K TV, so it is a pleasant surprise to find that renting Emma from Amazon delivers a largely excellent HD image which is hard to fault and certainly does not appear to suffer from any drop in quality.

Pleasanter still is the fact that this is possibly one of the more engaging non-Disney/Pixar 'U' productions made of late, remoulding the Jane Austen tale for a whole new generation, with Anya Taylor-Joy clearly using her Thoroughbreds character as a stepping-off point to this tangentially comparable tale of a near-sociopathic socialite manipulator who gets so wrapped up in weaving complex webs for all those around her that she doesn't notice when she gets caught up in one herself.

It's playfully delivered, although that The Favourite-style and tone will likely to prove marmite for many ardent Austen fans. But this isn't about affording yet another faithful run-around interpretation of the piece, with director Autumn de Wilde happy to do her own spin, which stays true to the language - and arguably the whimsy - but also dials everything up to 11 for effect. Bill Nighy is perfectly cast as Emma's colourfully exuberant and wildly eccentric father - it's Nighy going full-Nighy, basically, whilst Suspiria's Mia Goth nails the perpetual rabbit-in-the-headlights look required for the naive plaything that is Harriet, and Josh O'Connor (Prince Charles in The Crown) equally goes full tilt as an over-enthusiastic young vicar.

Sure this may not be everyone's cup of tea, and changing the tone so drastically may even put off some of the core audience, but hopefully a few fans of The Favourite will consider this worth a peek - even if further down the line when it's no longer a 'Premium Rental'.
﻿