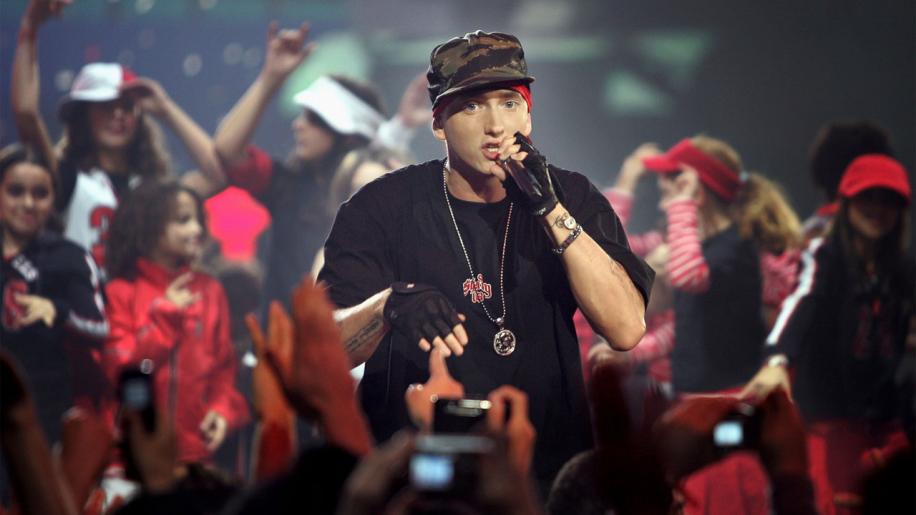 Marshall Mathers, Slim Shady, Eminem, whatever you want to call him, he is certainly at the top of the Rap game and is one of the best and most accessible rappers out there. He appeals to a broad cross-section of fans - from the hardcore rap world through to the more casual listener who likes his catchier chart hits. He's the Elvis for the Noughties in that your parents don't understand him and think his words are filthy (many of which they are as this is an unedited release - hence the 15 certificate)

As a precursor to his European tour starting in September, Aftermath Records have released this Live DVD of his sell-out Anger Management Tour from 2002. The concert featured on this disc is from Eminem's return to his hometown of Detroit and he is joined by some of his favourite collaborators such as D12 and Obie Trice.

I've never really found live hip-hop performances to translate as well as traditional bands do - perhaps it's because most rap artists can't juggle their high-speed lyrics with their stage movements for long enough to make it sound convincing. Eminem on the other hand has worked his way up the ranks and "done his time" unlike some of the other manufactured white rappers of old. His performances and lyrics are all his own and he knows how to perform in front of a crowd rather than a studio mike. Cynics were waiting for him to fail, but he earned his respect from his peers in the rap world for both his abilities and the fact that he's kept "it real". This is no Vanilla Ice!

In this concert, Eminem cranks out twenty tracks in one hour and fifteen minutes so there is very little excess baggage here. There are a couple of skits and interludes which are not to everyone's taste, but it's only a small part of an otherwise powerful set. Obviously as this is a 2002 concert, the songs come from "The Eminem Show" and previous releases. There are a few chart hits that even non Eminem fans will be familiar with such as the collaboration with Dido - Stan, the Aerosmith sampled Sing For The Moment, Without Me and Cleanin Out My Closet amongst others.

Eminem has tried to spice up the conventional rap concert with some of the ingredients that have become the norm for the bigger stadium acts such as U2 and he has tried to give it a circus feel with a ferris wheel, sword swallowers, magic acts and contortionists all making an appearance during the show. Unfortunately he himself doesn't have the same visual impact as his previous chainsaw and icehockey goalkeepers mask outfit did - this time it's just baggy pants and t-shirts. The other elements are not bold enough to change the small scale of the main attraction - when you come to see Eminem rap, you are going to have one man on stage with a mike and the other stuff is fairly insignificant. It's still a great show - but nothing like some of the Rock extravaganza's that we've seen from bigger mainstream bands, although it's still way better than any other Rap concert I've seen. It certainly takes someone special to stand up effectively on his own in front of a huge crowd and keep them enthralled for this length of time. Eminem is obviously a master of his trade - you may not like his style of music, but you have to appreciate his talent at what he does.

Forgetting the bravado and crotch grabbing of the hip-hop world, Eminem is a master wordsmith and provides a fascinating snapshot of life through his lyrical social commentaries - I wouldn't be surprised if people look back at some of his lyrics in the future and use them as a record of the issues of the people, spoken by one of them. When all the bling-bling and spinning rims have long since departed, some of his songs will stay with us as classics of our time.