"They will hunt you to the edge of this Earth for this." 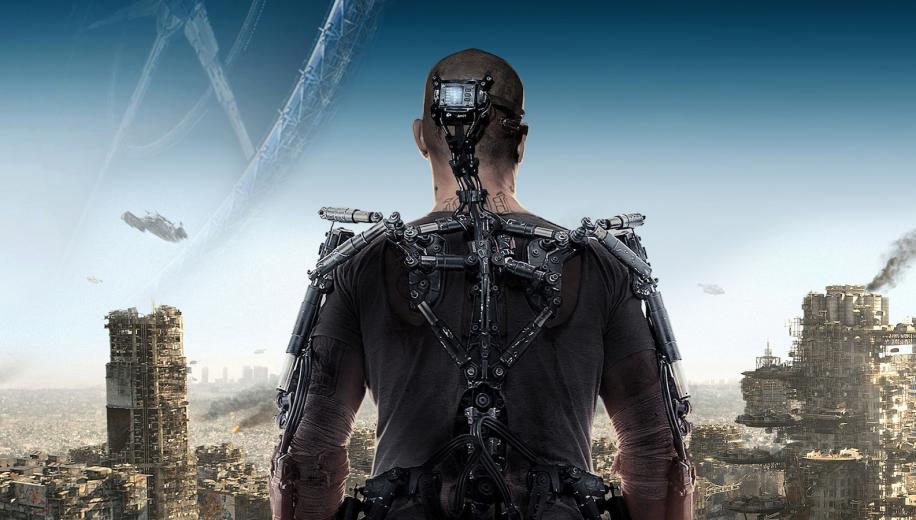 After a striking debut in District 9, Neill Blomkamp got the keys to the kingdom with this Matt Damon-starring sci-fi actioner, and thankfully didn't drop the ball.

Sure, District 9 was genius, blending a commentary on Apartheid with themes of xenophobia in a sci-fi actioner packed to the gills with practical effects-driven body horror. And yes, Elysium - as his follow-up - was primed to draw direct comparison, more clumsily handling its over social commentary, and arguably playing it safe when it comes to some of the potential for darker themes and body horror. But taken on its own terms, particularly in the cold reality of the rest of Blomkamp's practically non-existent film career (Chappie notwithstanding, his abortive attempts at getting Alien and Robocop entries off the ground only ended in disappointment), and Elysium is an impressive sophomore effort, shooting for a not insignificant scale and delivering some gorgeous effects and visceral action setpieces as it deals some blunt force trauma to a slew of social issues and to Matt Damon's protagonist in equal measure.

In the future, the poor live on a ruined planet and the rich live in a supposed utopia called Elysium, a giant torus in Earth's orbit, where little things like ageing and incurable illness are non-existent, and when manual worker and former convict Max gets a lethal dose of radiation whilst doing his job, he knows his only cure is getting to Elysium, no matter what the cost, undertaking a journey which will see him inadvertently getting wrapped up in a potentially game-changing conspiracy, whilst having psychotic assassins dog his every move.

Forgiving it its faults, it's a hell of a ride

Elysium is far from perfect. Whilst moving at a hell of a pace, the editing is all over the shop, and the generic score simply can't keep up, leaving it at once a thrilling ride and also a disjointed one. It pushes its political messaging quite hard too, failing to accomplish the same clever allegories as its predecessor and instead going for the jugular with its assault on the 1%ers, whilst those on Earth fight merely to make it from one day to the next. There's no subtlety here, no finesse, painting in shades of black and white as Jodie Foster's callous and ambitious Defense Secretary plays dirty to maintain control of her utopia, unleashing unstoppable mercenary (and inexplicable serial rapist) Kruger to clean up the mess on Earth, whilst Max becomes a champion for the rebels that seemingly only want Elysium's tech to be used for the benefit of everybody on Earth, and not just the privileged few who live in the skies.

Largely holding the whole thing together is Matt Damon's beleaguered protagonist Max, whose backstory is played just right, and whose dreams of journeying to Elysium as a kid seem a million miles away from the cold harsh reality of what he has to do to actually get there. It's interesting to think that not one but two rappers ended up missing out on the lead role, as the film would have likely been lost without Damon, who really sells the everyday working man part, making the tragedy-infused lost romance and dying-of-radiation-poisoning really work, whilst also convincing in the more physical feats once he straps on that exoskeleton and has to fight for a cause he finally believes in. Sharlto Copley's antagonist is a delicious bit of ham (the first and best in a series of villainous performances by the man), whilst Jodie Foster is called upon to deliver one of the worst accents of her career, but somehow still rises above it. The action is also frequently inspired - delivering a few exceptionally staged setpieces that truly highlight the imaginative future-tech arsenal the heroes and villains have access to, as well as making the most of the alternating Mexico City ruins and Elysium Fields; the latter ripped straight from Halo but only in a loving way. With the way his career is somewhat inexplicably going, this could easily end up the best Hollywood production he ever does and, forgiving it its faults, it's a hell of a ride.

Elysium comes to UK 4K Blu-ray courtesy of Sony Pictures Home Entertainment, just beating Sony's US release out of the gates. The Ultra HD Blu-ray release maintains Sony's high standards, enjoying the native 4K master (which was presumably in place ever since the days of its already reference Mastered in 4K Blu-ray release).

Released some 8 years ago as part of Sony's forward-thinking Mastered-in-4K line, Elysium always looked spectacular, boasting some tremendous craftsmanship at the source, realising exquisitely constructed future tech as well as grungy body/horror and shanty-town craziness, which leads to some seriously flawless texturing and detail. Somehow, the full fat 4K release is even more impressive, frequently rendering the absolute definition of picture perfection, with absolute clarity pulling every iota of texture out of the landscape. When Agent Kruger slow-mo steps his way into the fray, the image is utterly stunning - the weave on his shroud, the battle enhancements in his skin, the hair and tech. The CG is surprisingly good given the age now, whilst a lot of the future tech benefits from a practical edge that only lends to that welcome tactile quality.

HDR and WCG are like the icing on the cake, further separating it from the 4K-mastered Blu-ray, leaving the rich, sun-drenched Earth palette glorious, with richer tones than ever, from the perfect skin tones to the golden landscape, to the cool whites of Elysium, the perfect blue sky, the gorgeous, vibrant greens, the computer-screen blues of Spider's lair, and the fluorescent purples in one of the secret rooms. Black levels are inky deep, juxtaposed with those glorious whites, and rounding out an image that's frequently, if not utterly, reference.

Utterly demo and reference through and through

Dialogue comes across clearly and coherently throughout (notwithstanding the fact that you will simply not be able to tell whether or not Foster was dubbed, spoke that awful accent herself, or dubbed her own voice using ADR with this awful accent - take your pick), prioritised across the frontal array, whilst the score - however disjointed it may feel due to the way the film was somewhat haphazardly edited (watch the data heist action sequence and note how the score has to stop and start every time they cut away from the action - this doesn't feel intentional on the part of the composer) - gets excellent coverage and does its best to sweep you into the proceedings and keep the momentum going in what is a very hectic feature. Effects are the name of the game, however, with plentiful thunderous gunshots, impressive future-tech weaponry blasted out in stylish action shots, smashing against protective energy shields. Bombs detonate right under your floor, drones hover overhead, followed soon by the VTOL carriers, whilst the exosuit combat is punishingly delivered. The LFE weighting is off the chart, a particularly pleasant surprise given the tendency for new Atmos tracks to marginally disappoint in terms of LFE when directly compared to their non-3D audio predecessors, leaving this utterly demo and reference through and through.

Sony's 4K release of Elysium delivers a number of strong Featurettes on the 4K disc itself, as well as a plethora of old extras on the accompanying Blu-ray.

A number of strong Featurettes

Exoskeletons, Explosions and the Action Choreography of Elysium, The Hero, The Psychopath and the Characters of Elysium, and The Art of Elysium Miniatures - which were previously exclusive extras only available on some editions of the Blu-ray - make it to the 4K disc itself, along with Bugatti 2154 and the Trailer, whilst the accompanying Blu-ray has all the old general release extras, including a Deleted Scene, and a further half dozen multi-part Featurettes detailing the production.

Elysium may not have fared as favourably in direct comparison to Blomkamp's striking debut District 9, but it's an enthusiastically entertaining sci-fi actioner in its own right, arguably making up for a distinct lack of subtlety with its sheer intensity and impressive effects.

A great release that fans should consider a must-have

Sony's UK 4K Ultra HD Blu-ray release of Elysium is a gorgeous reference disc, boasting stunning reference 4K video and Atmos audio, as well as a whole host of extras features splayed across both the accompanying Blu-ray and the 4K disc itself. It's a great release that fans should consider a must-have.