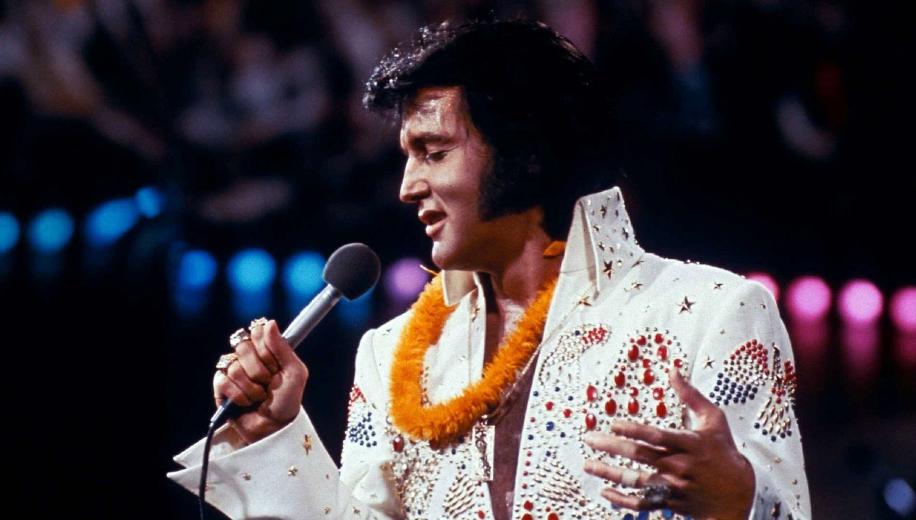 Recorded live on January 14th 1973, Elvis: Aloha From Hawaii finally aired on American TV three months later, pulling in fifty one per cent of the television audience and going on to be seen by an approximated one and a half billion people worldwide! Included on this Deluxe Edition DVD are three versions of that show - the rehearsal concert from January 12th; the full concert, beamed live by satellite around the globe, two days later; and on disc 2 - the American broadcast version. As such, whatever way you look at things, this DVD suffers from being very, very samey. The Elvis '68 Comeback Special Deluxe Edition DVD is a must have for every Elvis fan. How does Aloha stand up? Not so well, I'm afraid. Here are my thoughts as to why...

As the closing bars of Also Sprach Zarathustra give way to the opening riffs of See See Rider, from the shadows of stage back steps Elvis, dressed in the now famous white and sequined eagle stage suit. After the star gives an almost perfunctory “I'm here” type greeting towards the audience, Ronnie Tutt, James Burton and all get into the classic Elvis opener proper. So begins the Aloha Rehearsal Concert. Burning Love, Something and You Gave Me A Mountain quickly follow... and it's clear - there's definitely something not right with Elvis. Not only does his voice sound below par, but his whole demeanour seems lethargic - he looks bored, almost! Could it be that this is just a rehearsal? Check out the show that aired and you'll notice little difference. In fact this rehearsal show is renowned for being a better all round spectacle than the “real thing”. Skip forward a couple of songs to My Way and Elvis' faltering vocal abilities really come to the fore as he misses his lead in cue, and simply stumbles through the whole number. Elvis, good as he still is, is a mere professional-looking caricature of his former barnstorming sexual self.

As the final bars of a speeded up, slothful version of Blue Suede Shoes drift into the night, Elvis shares with us the fact that he'd, “like to do the saddest song I've ever heard for you” - and as he sings the chorus, so a bead of tear-like sweat meanders down Elvis' slightly puffy cheek. And what's so sad about this particular song? I have no idea! Other than the title - I'm So Lonesome I Could Cry - it seems to me to be a rather tedious filler song.

What Now My Love sees Elvis at least put some effort in, but even here his powerful note-hitting is covered by his backing group. Even so, for a moment a little Elvis of old fleetingly escapes. When he can find the energy to put even minimal gusto into a song, like American Trilogy, we are reminded of the guy's undoubted talent and charisma. Unfortunately, it's all too little, too late and Elvis always has the appearance of simply going through the motions. I Can't Help Falling In Love sees out the show and Elvis leaves the building. Thank you and goodnight.