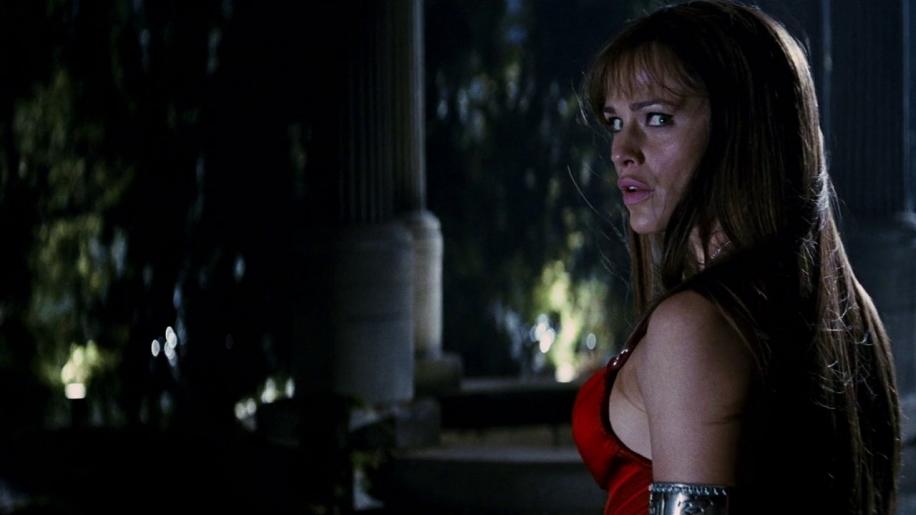 “Superstar Jennifer Garner proves that looks can kill as the sexiest action hero ever to burst from the pages of Marvel Comics. Restored to life after sustaining mortal wounds in Daredevil, an icy, solitary Elektra (Garner) now lives only for death as the world's most lethal assassin. Using her bone-crunching martial arts skills and Kimagure—the ability to see into the future—Elektra is on a collision course with darkness... until her latest assignment forces her to make a choice that will lead either to her redemption or destruction in the ultimate battle between good and evil!” and so the spiel goes

Oh dear! ....... Yet another comic character brought to life on the silver screen. There have been many such movies in the past five years and whilst some have worked extremely successfully, such as Blade, The X-Men the superb Hellboy and to a lesser extent, Spiderman. There have been many disasters too. Cat Woman, The Hulk, Supergirl, and the original Punisher with Dolph Lungren spring to mind. The problem with such films is that to make them really work, you need four things; A very good script, superb acting, brilliant direction and the special effects should be the best available.

Sadly, Elektra is lacking on virtually every count. The story has been told a million times in one form or another, the acting is as wooden as The New Forest, even Terence Stamp can't save it! The direction is weak at best only the effects are worthy of note. The movie is more 'Mortal Combat' than 'Blade' and the fact that the best performance came from 14 year old Kirsten Prout says much about the acting involved.

The main problem is that the movie doesn't know if it wants to be taken seriously or not. It begins as a dark, brooding piece and quickly declines into a ridiculous, 'just for laughs' mockery of a movie. I mean this cold, heartless assassin has an agent !?!, Not as in secret agent but as in a manager. She suffers from OCD (Obsessive Compulsive Disorder) and refers to herself as 'Soccer Mum'! This is a million miles away from Frank Miller's cold blooded killing, comic book character. Don't get me wrong, I love it when a comic book hero is successfully brought to life. Spiderman is a blast as is The X-Men. But when you get the impression that a movie has been thrown together just to cash in on a previous piece, then you know trouble looms.

Rob Bowman's direction is slow and monotonous for the most part and when the action does come, it's just too comical to take seriously. The characters all lack any depth, especially the 'bad guys' who we really learn little about, either their past or their motives. The fight scenes also look a little staged and do not flow naturally as they do in say, Blade. Also along for the ride are Terence Stamp as the mysterious mentor Stick, Will Yun Lee (Die Another Day) as the chief villain, and NFL-player-turned-mixed-martial-arts-champion Bob Sapp as the immovable Stone. The kids may love it, but it's not for those who expect a little more intelligence from a film.