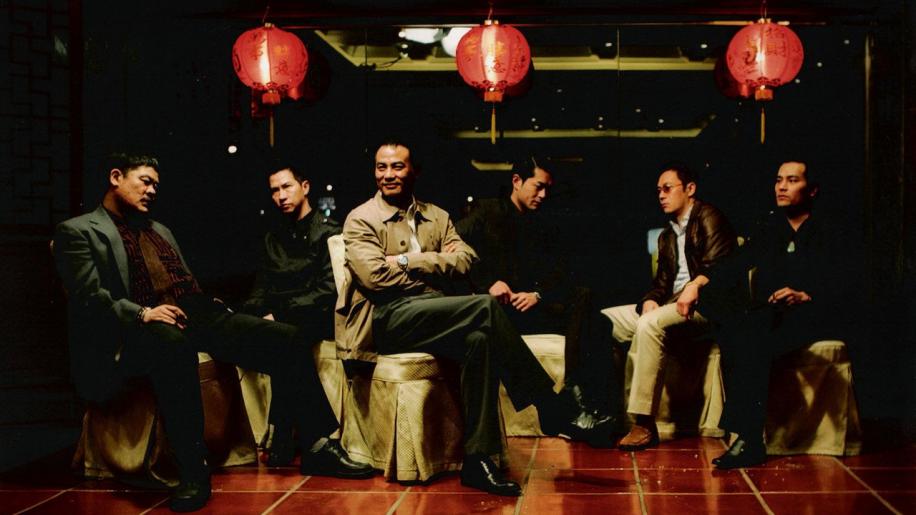 Following the critical success of 'Election', Hong Kong wunderkind director Johnnie To ('Throw Down'), released the second instalment of his triad based epic in 2006. For 'Election 2' To reinstates the prime Asian talent whom he collaborated with so successfully in the first movie. Simon Yam ('Ballistic') is back as Lok; Louis Koo ('Dragon Tiger Gate') returns as Jimmy, this time as the central character; Nick Cheung ('Breaking News') reprises his role as Jet as does Ka Tung Lam ('Ip Man') as Kun. Mark Cheng (Bo) also joins the already stellar lineup. Receiving five Golden Horse nominations and premiering at a midnight screening at Cannes, here's hoping that this movie can build on the solid foundation of the first and possibly inject a little more pace into proceedings.

Set two years after the original, this movie opens with the close of term for the current Wo Shing Society Chairman, Lok. The Wo Shing Society is a powerful Hong Kong triad organisation, steeped in ancient tradition reaching as far back as the Ming Dynasty. Although appearing to graciously accept his retirement from the position, Lok is secretly hoping that he is going to be granted a second term as the all powerful leader of the renowned criminal society. Calling in some favours from the elder “Uncles”, Lok cajoles a few into agreeing to support him for a second term, under the condition that the other available replacements are too weak to do the job. With this power play the wily Lok creates an opportunity to retain the Dragon Head baton (the symbol of the Chairman's complete power within the Society) which he holds so dear. Meanwhile Jimmy, one of Lok's understudies from the first movie and promising young gangster, is visiting China to view prospective areas for investment, now a successful businessman. With his wife at his side and his accountant, Mr. Kwok, looking after his affairs, it seems as though Jimmy has made it without the assistance of the Wo Shing Society. Later we realise that he, along with Big Head, Kun, Mr. So and Jet, is still affiliated with the triad. Although taking a back seat in the organisation, his ties with the mob are still strong and when the announcement is made that the time for election is upon them again, some of the senior “Uncles” encourage him to run for the position.

Initially Jimmy refuses but following an altercation with Chinese officials over allegations of Society connections, causing him to lose his property deeds, he is forced to return and reaffirm his position as candidate for Chairman. Although an obvious favourite for the position, Jimmy soon finds out that he has his work cut out for him. Lok, with the same unrelenting persistence which he demonstrated in the first movie, is not about to give up the Dragon's Head baton without a fight. He uses his current sway over the other more junior triad members to recruit (and manipulate) Kun, Jet and Big Head as allies in his war with Jimmy. Jimmy, although appearing mild mannered and civilised, begins to change, demonstrating a hidden and frightening steel which gradually exposes the fact that he has what it takes to be Chairman. With Mr. So and a hired mercenary (Bo) on side, he begins to make his advances towards the top of the Wo Shing Society. As the movie progresses, Lok begins to fear Jimmy, becoming completely obsessed with reprising his role as Chairman. Becoming desperate, he begins to eliminate those who oppose him within the society. For the remainder of the presentation we once again follow the trail of the Dragon Head baton

While the ceremonial aspects of the Society feature predominantly throughout, they thankfully are not the focus, as was the case with the first movie. Don't get me wrong, I did enjoy the historical aspects of this content but it tended to slow the pace of 'Election 1'. Pacing is where 'Election 2' exceeds over its predecessor. While retaining the same wealth of acting talent and To's innovative style/ flair, the movie moves along at a cracking pace. With the primary characters and the Society already firmly established, the action and intricate plot take center stage, allowing the war between Lok and Jimmy to proceed without interruption. The plot itself is complex, containing many innovative and unseen twists and turns. The carefully planned and dangerous game of chess which Lok and Jimmy play with each other's lives during the battle for the Chairman position is thrilling. Lok, while initially appearing uber-confident, slowly begins to exhaust his seemingly ample resources. Jimmy on the other hand, while outmatched, displays a steel and determination which causes Lok's unshakable belief (that he will remain Chairman) to waver, forcing him to more and more drastic measures. Although seemingly beaten from the outset, Jimmy undergoes a temporary transformation, becoming a ruthless monster. This turn of events instantly raises the action content to very satisfying levels. There are also plenty of instances of shocking and savage violence throughout this movie and I'm talking 'Casino' violence, not for the faint hearted (sausages anyone?). To has omitted any sound effects for some of these brutal interludes to enhance their striking nature. The only audible sound is the score, which accompanies the gruesome savagery taking place on screen. The majority of the primary characters all get plenty of on screen time and make worthwhile contributions to the plot. The themes of power and corruption run strong for the duration, which are exemplified by the dispute between Lok and Jimmy. The fate of the Wo Shing Society also mirrors the fate of Hong Kong, a fact which cements the connection between To's movie and the city where he made his name.

Once again we see this revolutionary director bring his distinctive style and flair to the entire production. A prime example is the scene at the close of the movie where thunderclouds roll across the sky, enshrouding the new Chairman in darkness as he realises the responsibility which he has undertaken. It's at this point in the movie where we realise that the Wo Shing Society has been forced to lay aside its old traditions and embrace change. It's as though the gloom was signifying the impending closure of the first and most ancient chapter of the Wo Shing Sociey. This scene is also a reflection of the political situation which resulted in the reunion of Hong Kong and mainland China, a fact which To skilfully portrays. Many of the shots are from unusual, semi-concealed positions, such as watching a gang member being slain from a moving van, which has the effect of drawing the audience into the presentation. There are many other political nuances and examples of beautiful camera work throughout, demonstrating why To is one of the greatest Asian Cinema directors. Louis Koo, taking the Lion's share of on screen time, perfectly plays the cold and calculating Jimmy. Simon Yam, reprising his role as the wily Lok, provides an equally engaging performance. Both men share good on screen chemistry and also obviously work very well under the direction of To. Nick Cheung is surprisingly strong and energetic as Jet, really excelling when compared to the part he played in the first movie. The rest of the cast are believable and provide steadfast support for the main protagonists.

Building on the solid foundation of the first movie, 'E2' makes a vast improvement both in terms of content and pacing. While initially I was slightly disappointed with 'E1', I can now see that To merely intended that both movies be watched in conjunction with each other. Although To mentioned that he would not have made this movie if Hong Kong remained independant, I do not believe that this is wholly true. There were too many unanswered questions and loose ends regarding character development left over as remnants from 'E1'. There is simply no way that To could have allowed the painstaking process of creating such complex characters and the passion which he obviously invested in the feature to remain stagnant. Whatever the true answer I am glad that To has finished the story of Election. When both movies are viewed in tandem the story takes on a new light and provides some excellent instances of excitement and closure. 'E2' is without doubt an excellent movie but without 'E1' as its foundation it would not have scored so highly. Akin to the 'Red Cliff' movies, I urge you to watch the 'Elections' as a pair.