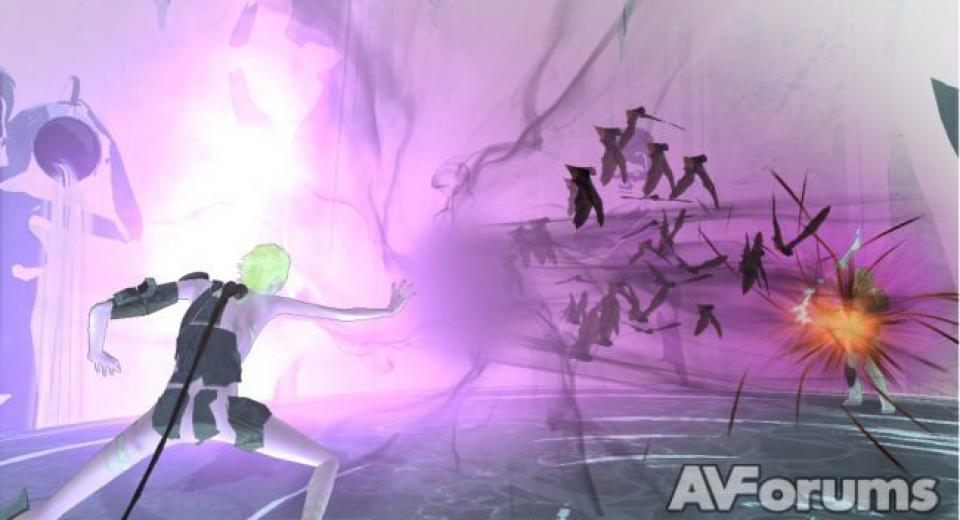 Hitting bargain prices insanely quickly, and no doubt destined to go out of print at some point, I thought I’d take the opportunity to look back at one of last years less well publicised titles, El Shaddai: Ascension of the Metatron.

You can just imagine the marketing man's face when he heard the name of the game, it hardly rolls off the tongue and is sure to be re-spelt by Google in a variety of ways for the less than sure fingered typist. The title coming from an ancient Judaic term for God, and the inspiration being a version of Biblical events that did not become canon, The Book of Enoch; it couldn't be a harder sell. Well, that isn't strictly true, because I should mention that the game is absolutely barmy in almost every aspect as well.

Coming from the mind of Takeyasu Sawaki, whose previous credits include character design on Okami and Devil May Cry, El Shaddai fits into a category that may as well be titled “Eastern oddball” for the sake of Western audiences. It's a particular curiosity, a type of game that seems to resonate with Japanese gamers but become destined for mere cult status on these shores. Hailed by some as a stylish avant garde approach to the medium, and derided by others as the Emperor's new clothes. So, which does El Shaddai prove to be? The most striking feature of the game is undoubtedly its visuals. If your interest wasn't piqued by the tongue-twister of a name (it didn't do Shin Megami Tensei much good), and the thought of another third person action beat-em-up style game was anathema to you, the cel-shaded artistry would no doubt catch your eye. Ranging from monotone noir-esque use of shadows and minimalistic line drawings, to the sort of explosion of colour you'd perhaps assume to associate with a particularly heavy blow to the frontal cortex, it is, in short, a bit of a looker, but not to everyone's tastes.

Fire up the disc (and after the mandatory install on the PlayStation 3) and you'll be confronted with an Assassin's Creed style disclaimer - “Inspired by religious texts....multicultural team of many faiths” etc. Now swallow that rising bile in your throat and relax, because what follows is about as far from pseudo concerned religiosity as you can get. It's a third person combat action adventure, and if you choose to take it simply as such you'll not be penalised, but the overall experience is tailored to be so much more, story and all.

The narrative may sound on paper like some kind of theology class, but it twists this premise in inventive ways, both stylistically and story-wise. Talk of recapturing fallen angels is nothing new, but considering the obscure source material, level and character design often falls somewhere between sci-fi and impressionism, with your guide, Lucifel (voiced by Jason Isaacs), looking like he's stepped straight out of 90210, going so far as to touch base with God on his mobile sporadically.

The core mechanics are uncomplicated – run along, jump a bit and take out any enemies that stray into your path with a selection of range or melee weapons.  The fighting seqences are sporadically punctuated with bizarre side scrolling platform sections that push the game's penchant for the absurd into overdrive - not many Biblical battle stories will see your hero jumping over what appears to be a sponge finger rolling a beachball.

As Enoch, you start with nothing, but are soon shown how to disarm combatants in order to gain weapons, meaning you can switch as and when you choose. The three core means of dishing out punishment on fallen angels and their underlings are: the Arch , a shining curved blade – basically what a Klingon designed lightsaber would look like - that empowers you to float briefly; the Gale, a hoop-like object that can fire projectiles; and the Veil, a shield/gauntlet combo for close range and heightened protection.

All have their strengths and weaknesses, what some offer in terms of speed and distance attacks they usually lack in terms of overall power.  Once multiple enemies enter the fray the tactical choice of whom to disarm and when is pushed to the fore; fail to disarm an enemy carrying a weapon you may prefer and you'll be stuck facing the rest of the fight with the wrong tools.  It's not a case of one being infinitely more suited than another, but these choices make a difference. Your handy killing tools don't escape the encounters unscathed though, and their condition degrades the more they are used. You have to knock them back into workable shape, or as the game puts it – purify them. The button layout avoids the elaborate in the same way the central gameplay does - of the four face buttons any of two will suffice for attack (hold down for a charged version), and a further choice of the other two for jump. The tip triggers are for guard and purification, and guard in conjunction with a face button for either a special attack or special move - simplicity itself; attack, jump, guard and special, plus a nifty overboost move when you hold both primary triggers. No need for anything on your controller bearing the numbers 2 or 3 then.

The devil, however, is in the detail, and like other Japanese third person combat action adventures of the modern era that have garnered huge praise, such as Devil May Cry and Bayonetta, performing the moves themselves is only a minute fraction of what has been carefully crafted; the essence of enjoyment is found in the mastery of the techniques, and that is far harder to achieve. The game allows for the casual player well, offering only normal and easy difficulty settings initially, and implements a forgiving Track & Field style frantic button mash for a revival technique.

Early enemies are the perennial punching bags, but even on easy they hint at a tougher side that will penalise mindless button bashing, swiftly starting to move in, never hanging back for long, thus lessening the opportunity for continual cheap distance attacks to diminish their numbers. With each destroyed you’ll collect orbs, the standard form of experience points used to build up your “overboost” ability, though not available straight away, it's a sort of empowered state where everything is enhanced.

The armour you wear breaks as the fights go on, and without a health bar (or any HUD whatsoever for that matter) it showcases a really neat way of displaying whether you're getting your backside handed to you or not. As a crushing blow comes flying in, to see your chest-plate crack and fragments litter the air is one of a number of truly dynamic touches. Talking of the dynamic, El Shaddai's artistic plan has to rank as one of the boldest visual and aural visions for a game in some time, and it hits the nail on the head in almost every respect. It has an almost indescribable (but hey, I'll try anyway) quality; the strange structures you walk amongst and over, and dreamlike shifting skies cover up what should, by rights be a crippling linear level design. You're on a rail, there is little to no deviation, yet like a rollercoaster the design tricks you into focussing on the ride itself instead of the track's crushing inevitability.

Once you take into account the sounds, the chanted singing mixed with synth creating an atmosphere of the immense - sci-fi and Biblical - and the different weapons striking with an almost musical quality, I can only think of Ico and Okami as titles even comparable in tying together such a complete package for the senses without bordering on the all out synaesthesia of Rez.

The fixed camera complements the cinematic approach, always heightening the shift from close to medium distance and thus the drawing of your eye, resulting in an impression of scale. Without being able to look around it could have been claustrophobic, but it's employed well, moving not for movement's sake but to emphasise what should be seen, as all decent fixed perspective cameras should do, liberating the gamer rather than having them constantly reaching for the second analogue stick. There are very few instances where you'll feel you could have chosen a better vantage point even if you would like the occasional gander about.

Even the areas where the graphics fall down border on the defiance of critique, the aliasing on the PlayStation 3 hampering tight lines, yet fitting in with the bizarre alt-world sci-fi qualities, like the intentionally glitchy memory sequences in Assassin's Creed. They are still massively outweighed by the well implemented graphical touches - deft blurring effects, hazes that spread across the screen like heat rising in this infernal journey, being viewed through misty glasses.

Areas suddenly drain of colour, flowing from bright hues to monochromatic starkness as the camera shifts as if you were viewing a watercolour that's been left out in the rain. It's possible to sound as if this is a grand work of art hanging in a world renowned gallery, such is the wealth of visual ideas being pinged at you, but it would be undermining the game not to hammer the point home – El Shaddai is a kaleidoscope of colour and inventive aesthetics. These draw you down the rabbit hole of a narrative that vacillates between the understandably Biblical and that particular flavour of bonkers that only seems to emanate from Japanese studios. Even the opening credit sequence pushes for the artistic rather than the pedestrian. The fighting mechanics epitomise the idea of accessibility covering complexity in a manner other titles have danced around or outright missed, resulting in the excuse they are intentionally for hardcore genre fans only. El Shaddai relies upon timing, for the player to unlock those little “eureka” moments in their own head, finding the perfect, almost musical combination of button presses at the correct tempo to make the battles flow in their favour.

Play it for the story, play it for the visual and aural treats, but you simply have to play El Shaddai no matter what the catalyst for your actions. Just about everything seems stacked against it becoming a mainstream hit, but it's a title that deserves to be savoured in all its kooky madness. The graphics will be hard to stomach for some, cel-shading still splits audiences, but there are few games that could make the opening ceremony of the Beijing Olympics look like a simple fireworks do in a pub car park. El Shaddai can.

From hardcore brawlers to button mashers, those looking for alternative narratives or poncy types eager to portray games as an adult artistic medium, El Shaddai has something to offer; air combos, old-school gameplay reliant on timing and an optical flourish bordering on the absurd. Like a game designed by a man who, having read The Book of Enoch, proceeded to have a hallucinogen-induced breakdown in a bubblegum factory, it has a quality that is hard to logically recount but once tasted is easy to be seduced by. Don't think too hard, let it wash over you, and in ten years time when it's rightly put in the Videogame Hall of Fame for services to gamers' retinas, just tell everyone you knew it was a classic all along.