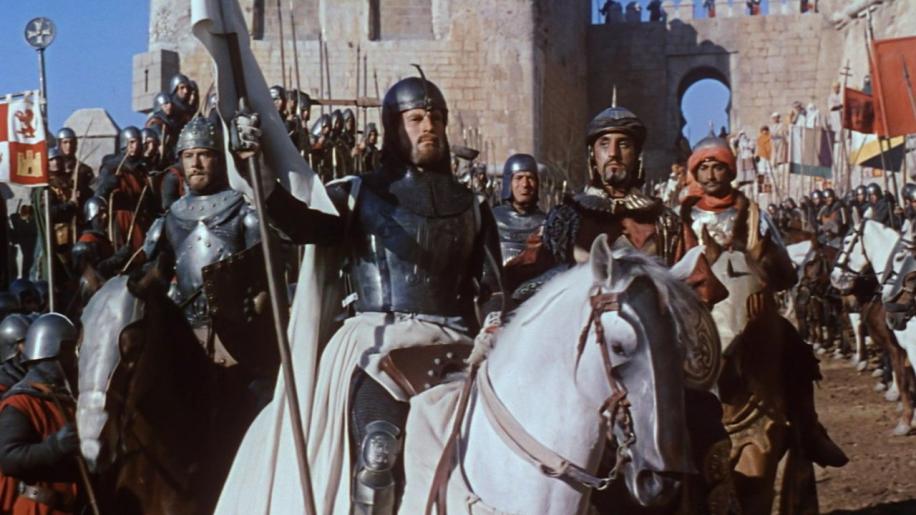 “You would do anything to hurt Rodrigo.”

“No, I would do anything to win you.”

Anthony Mann's mammoth undertaking to tell the tale of the Castilian knight, Rodrigo Diaz (the stone-jawed Charlton Heston) - known as El Cid by his followers - who fought to keep 11th Century Spain from terrible civil war, and then oppose the mighty threat from North African Moors under Ben Yusef (a slimy and evil Herbert Lom) is a vast and sprawling saga that literally defines the term “epic”. It's big, it's bold, it's brash, and it's got one of those vigorous scores that sadly turns people off classical soundtracks with its stubborn refusal to ever simmer down for a second, and it's stuffed full of rousing speeches and arch-melodrama - but is it actually any good? Well, yes, it is. In places.But then again, unfortunately, in a lot of other places it is not. The main problems with this often exciting, and often turgid historical story, are the two leads, Heston and Sophia Loren who, by the way, looks absolutely beautiful in this role. The screen goddess plays Rodrigo's love, Jimena, and the pair have a turbulent start to their romance - not least with Rodrigo killing her father and assuming his role of the King of Spain's Champion - but their bond is forged in mythic and eternal broad strokes, ensuring that they will be together until the end, come what may. However, the two studio heavyweights may provide epic screen presence and guarantee the movie a lasting residue of class, but they struggle to elicit the necessary sensitive side - Heston especially, who, in my opinion, cannot do romance at all - and fail to gain audience empathy with their personal plight. Heston is convincing in his armour, suitably driven and intensely worthy, yet enormously unable to portray the character's softer side. This is no better showcased than when he emerges from a barn after some inept canoodling to face an armed multitude intent on becoming his army. He is clearly more comfortable with this rousing call to arms than the lovey-dovey stuff of a moment earlier, and thus, so are we.

“Don't make me stain my life, and Jimena's, with your blood.”

The screenplay too, tends to wallow in speech-making and has practically every character enunciating vast tracts of noble challenge and proud endeavour. It thrives on pomp and ceremony, with huge amounts of screen-time devoted to pageantry and sweeping processions, which do, ultimately, become rather tedious, despite their large-scale breadth and dynamic verve. But this brooding and overtly theatrical intensity is matched only by its filmic elegance. Mann ensures that his film never looks anything less than mesmerising. It may be powered by overwrought emotion and a stinging clash of fierce idealism, but there is no escaping the awesome scope and visual magnificence of the film. From the incredible sets to the grand backdrop of huge landscapes and fractious kingdoms - there is forever a sense of moving about this huge dramatic canvas in the wake of massive armies and inordinate glory. Treachery and deceit seem to signpost Rodrigo's life, but their settings are always captured with an entrancing eye for detail and some breathtaking compositions. Robert Krasker's cinematography is wonderful - look at the scene in which we see Rodrigo and Jimena first come together with the incredible angle looking over Heston's shoulder, or the fantastic crane shots passing over crowds to the lofty heights of the castle. There are even some very skilful tracking shots of the action - in particular, check out the prowling camerawork that accompanies the brilliant, and surprisingly violent, joust sequence. The camera really does well to keep up with the combatants as they bruise and pummel their way through what becomes a vicious fight to the death. Mann even perfects some singularly rapturous images like the shot of a flickering flame seemingly dancing on the end of Rodrigo's blade, or his later acceptance of the challenge and honour of defending Spain, with the sunlight shining upon his bloodied armour, and, most significantly, an outstretched hand clutching out for love and dignity at the last minute. But, of course, the final, exultant death-ride into immortality takes the accolade of most inspiring.

“You would punish the man who would be the Saviour of Spain?”

The supporting roles are populated with familiar faces - from Michael Hordern, John Fraser and Genevieve Page to that bloke who betrayed Jason And The Argonauts in the stop-motion classic - and all acquit themselves with gusto, emoting like there's no tomorrow. After all, this is not the cinema of subtlety. Most scenes are performed against a background of thousands, all in fabulous costume, so the big moments come thick and fast - the asking of a treacherous new sovereign to swear upon the Holy Book, the demanding of a princess's hand in marriage upon safe return and the many huge speeches to men-at-arms thirsting for blood. But there are one or two little scenes that, perhaps, carry much more impact for all their quietness, such as Rodrigo's helping of a lonely leper that leads into a tremendously shot reunion with Jimena beneath three hilltop crosses, or the haunting beauty of the hero meeting his twin daughters for the first time. Despite the over-the-top bravado and the indomitable force of star-power bludgeoning most scenes, it's nice to witness such eloquence at work, as well.

“It's only now ... now that I know how hard the road would have been without you.”

But again, the faults shine through in all their glory, too. The dialogue, for the most part, is heavy and loaded with the self-reverence so typical of genre movies made during this era. The fight choreography, much like the film, is cumbersome and unwieldy - except for the jousting scene which is fabulously hard-hitting (look at how Rodrigo unhorses his opponent). And the cast seem to shout out the different names of all the kingdoms of Spain far too often - making it sound like the scoring of the Eurovision Song Contest! There's also a very curious moment quite early on, when we first meet Loren's Jimena. Listen for when she speaks to her father and utters “Two men,” it sounds very clearly like she's saying “Two mates,” which, for the innuendo-fans amongst us, is a nice touch.

So, an intended masterpiece that somehow misses the mark, despite having all the right ingredients in place. Big stars in career-defining roles, a true depiction of a bygone time, genuine heroism and emotional resonance amid a brutally realistic life and death struggle for honour and justice - oh, that would be Gladiator, wouldn't it? Still, if you want a film that eagerly swallows up an afternoon, then look no further.