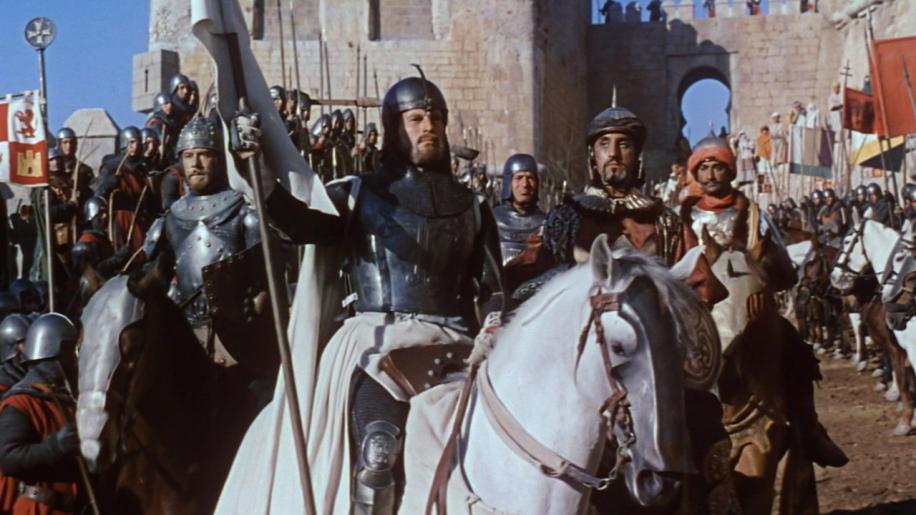 Well, this is a huge disappointment. When you consider that the original theatrical aspect for El Cid was a glorious 2.35:1, to have a film of this immense visual scope hemmed into a 4:3 image (as this edition is supposed to be) borders on sacrilege. However, the image does appear to have been enhanced, as the screen caps reveal, with the picture looking more like a 1.78:1 ratio. Either way, this is the wrong aspect. And, as if that wasn't bad enough, the print used for this transfer is considerably unappealing, too, which is all the more surprising when you discover that El Cid was lovingly restored back in the early nineties - a project involving none other than Martin Scorsese who is, in fact, a big fan of the movie. He has waxed lyrical on Anthony Mann's fantastic compositions, his framing and his use of space, and this just makes you painfully aware that this release is obviously not the one he worked on.

Let's discuss the bad points first. After a juddery title sequence that is actually letterboxed, the film then opens up to full-frame and a plethora of print damage that will continue unabated until the end. We're talking heaps of grain, bad flickering, scratches galore and dirt blotches, wobbly scene changes and terribly muted colour. In fairness, I could put up with this, given the film's age - but not when you consider that there has been extensive work done to restore the movie. Foregrounds seem to suffer as much as backgrounds with lack of detail, and distance definition is predominantly murky and indistinct. Contrast is handled ineptly with many glaring whiteouts and flashes during the joust sequence (in Chapter 5) and a general grubbiness to the blacks, which are mucky and polluted with grain. Transitions from light to dark, and vice versa, are jarring and rough. On large screens, some scenes may prove considerably irritating.

However, there are some good points, too. Mann's vistas, compositions and the exquisite framing much loved by Scorsese, actually look quite nice - even in this 4:3 captivity! Colour does occasionally ignite the screen - the massed ranks of soldiers, the regal court scenes - and, most bizarrely of all, the image seems to improve for the last hour of the film's duration, with blacks becoming more solid (Jimena and the twins languishing in the dungeon) and some nice bright action caught with stability and vibrancy. Detail also improves, with some better definition of castle walls, flags and the huge army encampments. The image seems to become bolder, sharper and takes on more depth, colours even gaining some level of warmth.

Still, all this is too little, too late. Similarly with the audio, the restored version apparently has a really cleaned up soundtrack that is a joy to hear. Sadly, that is not the case here. Stretched across the front of the soundstage - though with hardly any decent separation - the Dolby Digital 2.0 track is tinny and shallow, featuring the often harsh and bogus bass of an un-restored spaghetti western, with voices literally barking out of mouths with an unrealistic crunch.

Rozsa's deliriously strident score is brash and imposing and certainly comes to the fore in the sound design. If you like the score then you may find its reproduction here quite pleasing with its dominance over virtually every scene. Dialogue may be clearly heard, but so is the deeply demoralising drop-out that comes thudding in just before the final battle. The bash and clash of swords is exceptionally loud and righteously clanging - it's as if each weapon has an in-built amplifier - but the effect is still not at all realistic. There is also copious hiss and crackle whenever the music dies down a bit.

Again, this just does not do the movie justice. Nothing at all on this check disc, although apparently there may be some small bonuses on the final release, akin to the R1. A hugely ambitious undertaking with a cast of thousands, sets to die for and resounding battle cry for heroic nobility at its core. However, El Cid buckles under the weight of its own self-importance with far too many speeches, some monumentally wooden acting - not least from the two leads - and a po-faced seriousness that often appears laughable. The good bits are in there too, and it's certainly a great tale told with passion, but this is not the release to watch. Not by a cinemascoped mile, folks. I'm not sure if any other regions have produced the restored version on DVD yet - but it may be well worth finding out. So, to sum up then - this is lavish entertainment let down by an abysmal transfer. Which is an epic shame.