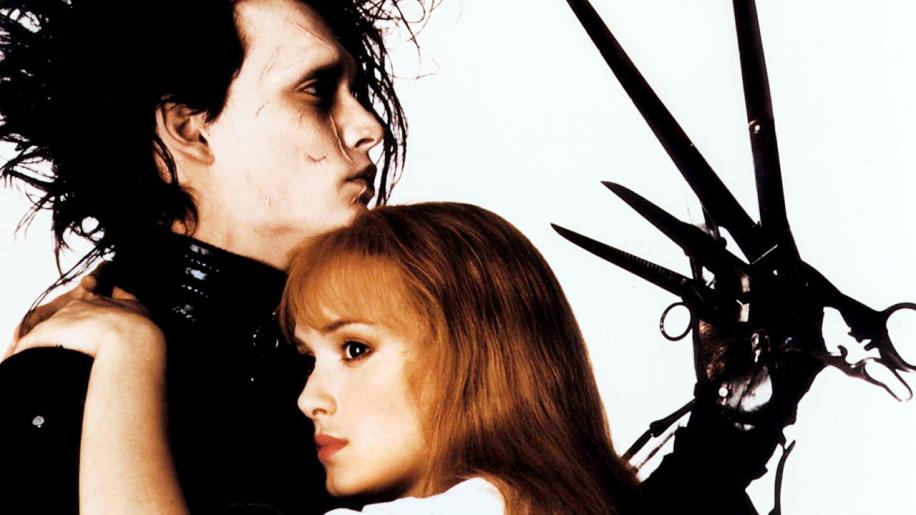 I'm not quite sure what it is about Tim Burton. Maybe he banged his head as a child or something, but there is no doubting the fact that each and everyone of his movies contains a certain amount of weirdness. We comic book fans owe Burton for his re-visualisation of The Dark Knight in 1989's Batman. But, he then went and spoiled it a bit by going completely over the top in Batman Returns. One thing we can all agree on though is that his style of film-making is unique among his peers. A Tim Burton film sticks out a mile.

Almost synonymous with Burton is Johnny Depp. At the time of making this film, Depp was a successful TV actor starring in 21 Jump Street, an American cop show that has found cult status on DVD. Depp has gone onto superstardom status and is now probably the hottest property in Hollywood at this time. He and Burton have gone on to make several films together, including using Johnny's voice in the animated Corpse Bride, and next year will see another collaboration between the dynamic duo with the musical Sweeney Todd: The Demon Barber Of Fleet Street. However, for the purpose of this review, we need to go back to the pairs first movie together, 1990's Edward Scissorhands
Based on a drawing that Burton himself made in his childhood, Edward Scissorhands is essentially a re-working of the Frankenstein story - albeit a very clever one.

The story starts with Avon lady Peg Boggs (played by Diane Weist) trying very unsuccessfully to trade her wares in suburban California. She decides to try her luck in an old castle on top of a hill at the end of her road. She knocks on the door with the traditional “Avon Calling” introduction that was splashed around many TV adverts of the time. Entering the castle, she comes across Edward (played by Depp), a kind of Gene Simmons look-alike with one exception - he has scissors instead of hands.

Peg takes pity on the young man, living all alone in that big castle - and decides to take him home with her. She learns from Edward that he is the creation of The Inventor (played by Vincent in his last role), who unfortunately passed away before he could be finished.
Peg decides to introduce Edward to the big wide world. He meets several people who all seem to know doctors who can help him but never actually introduce him to one. Pegs husband Bill, (played by Alan Arkin) discovers that the unfinished man has a talent for hedge clipping. This leads to him cutting hair and dog trimming - much to the admiration of Pegs flirty neighbour Joyce (Kathy Baker), who sets her sights firmly on the Edward.
Peg also has a daughter, Kim (played by the lovely Winona Ryder - sporting her naturally blonde hair for once). The scene in which Edward and Kim first meet is hilarious and involves a waterbed - I'll say no more...

Kim has a bullying boyfriend who's father doesn't trust him - and after seeing that Edward can pick locks with his scissors, decides to use him for his own gain. Edward ends up being locked in the house as the alarm shuts everything down...but this incident starts to turn everyone against poor old Edward. Coupled with his rejection of Joyce, who makes out that Edward attacked her, these incidents leave the town baying for Edwards blood. But Kim still believes him and as Edward carves an ice sculptor at Christmas and sends snow flurry's across California for the first time, Kim realises she is falling for the monster...cue angry mob!

Edward is chased back to the castle by the mob but is protected by a police officer who took pity on him when he was arrested for breaking and entering. The mob disperse and Edward is free...or so it seems.
We then cut back to the opening scene of the movie which is of an old lady telling her grand-daughter why it snows every Christmas - and about the first time it happened...
OK - as I stated earlier, Edward Scissorhands is a blatant re-telling of the Frankenstein story. It has everything - the mad inventor, the poor disfigured outcome of his experiment, the castle, the angry mob - and of course the love story.

Burton tells the story brilliantly. Helped along with that imagination of his, each and every frame is a masterpiece. From the pastel coloured houses of suburban California to the dark and murky interiors of The Inventor's castle, the amount of detail is enormous. Take for example the poetry scene. Look over Edward's right shoulder and there's a coat hanger - in the shape of a hand! Edwards' skills as a Topiarist are shown off to great effect using just about every camera angle possible - check out the scene where peg first enters the castle...

Of course, the film wouldn't work without its star man. Several A list actors turned down the role of Edward (including Tom Cruise), thinking that the film was too dark or too silly. Jim Carey, who was a struggling actor at the time, auditioned unsuccessfully several times for the lead role. Their loss was our gain as it was the first stepping-stone for Johnny Depp to ply his trade on the Hollywood big screen in a successful movie. Depp had dipped his toe in the Hollywood pool previously with small parts in A Nightmare On Elm Street and Platoon. He did get the lead role in the awful Cry Baby. But it was the role of Edward Scissorhands that made the world sit up and take notice. Depp seems to step effortlessly into the scissors. To research the role, Johnny watched every silent Charlie Chaplin film he could get in hands on to learn the art of conveying emotion without speech. With the aid of Stan Winston and his make up team, he manages to portray every emotion perfectly. The audience is taken on a ride of their own, encouraged to use nearly all of their senses - including hearing to take in Danny Elfmans stirring score. Elfman has worked on more films with Tim Burton than Johnny Depp has and knows his director intimately. A Tim Burton film without a Danny Elfman score is like - a Burton film without Depp!
Together, the three of them have produced a masterpiece of modern cinema. Sure, it's a bit dated - but it's still timeless. I cannot recommend this film highly enough. It may be a little dark for the kiddies - but cuddle up on the sofa with them and marvel at Burton's world together.