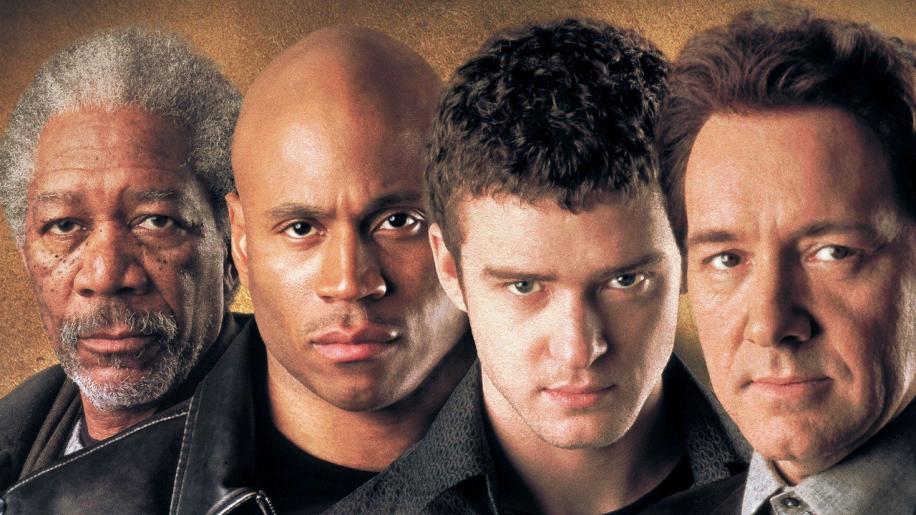 The arts are a funny business, it seems none are ever satisfied with there allot. Models want to act, actors want to direct and singers want to act; what makes any of them think they can do it? Because, generally they can't. I blame Elvis. His talent was so immense that he was put into film and he couldn't act. But it didn't matter, the films were tailored for that, musicals that allowed him to use his talents on film. Other singers tend not to do that nowadays, oh no, serious acting that seems to be the order of things. To the ruin of all. I don't care to count up all the singer/actors nor there ghastly film, because I have a chore ahead of me right now, and its name is Justin Timberlake. You know, that bloke famous for knocking off Britney Spears a few years back. Anyway, taking a leaf out of his current squeeze Cameron Diaz, herself a model turned actress, he too has moved into acting, if such a term can be used for his performance, in tonight's feature Edison (A.K.A. Edison Force).

The town of Edison used to be a real crime hot spot, that was until the ruthless First Response Attack and Tactical (F.R.A.T.) squad was formed to clean up the town. Now it's the model city, only one problem F.R.A.T. has become a law unto itself. So it takes roving reported Josh Pollack (Timberlake) who, on the flimsiest of evidence manages to convince his editor in chief (Freeman) and seasoned political investigator (Spacey) that corruption is rife; though it is not until he and his girlfriend are beaten up that anyone takes notice. So leading to a political struggle against the freedom of the press as F.R.A.T. try to silence their critics, stay safe in the public eye while maintaining their underworld connections.

Sounds pretty good huh? Don't be fooled, this film is as rubbish as they come. I mean who ever heard of a hero called Pollock, though it's an apt term for Timberlake. His performance is dismal, not only that, he shares the screen with Morgan Freeman and Kevin Spacey! Now they look like they are going through the motions, barely passable, but compared to Timberlake, who looks as much out of his depth as he is, they are Academy Award performances. Now it is fair to say that not all the blame for this film lies on Timberlake, the script must also take a share; it's clichéd, it's lazy and it's contrived. There is not an original idea in there and it moves from one impossibility to the next with scant disregard to its audience, and this, over and above the ridiculousness of it all is the most insulting thing of all, and one I can't forgive. David J. Burke directs with assured ham fistedness, employing a variety of angles and moves to help spice up a rubbish story, however it all comes off looking crass. The film languished in release purgatory for over a year before being shot straight to the DVD market; I wish it would have stayed there. Normally I'd delve into a little more depth with my reviews, but this film simply is not worth it. The only think worth thinking about is how such seasoned actors ever managed to get mixed up in this travesty.