Feeble TV speakers getting you down? Look no further 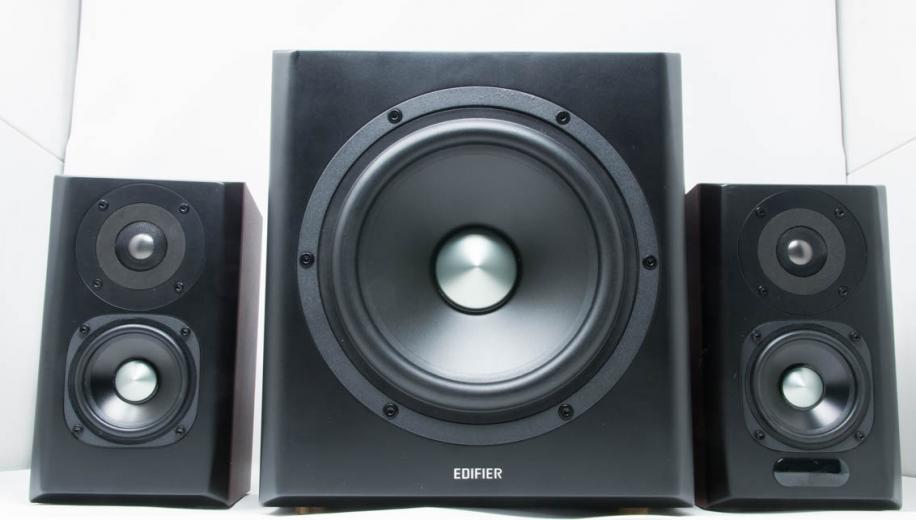 What is the Edifier S350DB?

The Edifier S350DB is a 2.1 powered speaker system that comprises a pair of satellite speakers and a subwoofer. It is intended to offer a different take to both soundbars and all-in-one speakers without tipping into a different price point. On paper at least, there’s much to be said for this. The sub-sat principle has been one that has been hugely influential in multichannel AV. The idea of only having to find visible room for five small speakers and then being able to stow a sub somewhere out of sight is a good one and has proved very durable. Taking the same concept and removing three speakers and the need for an amp looks very good in principle.

Edifier argues, beyond potential performance gains, the choice of sub-sat gives the S350DB an ‘Old school style with a modern sound.’ While we can collectively come to terms with the news that a speaker shaped like a speaker is now ‘old school’ and work out quite what we do with that, there is undoubtedly something a little different in the aesthetic of the Edifier that may or may not appeal. Then, of course, there’s the price. At £250, this looks like an awful lot of speaker for the money. Is this a retro-tinged but bang-up-to-date way of augmenting your TV sound or a technical blind alley? There’s only one way to find out. The first thing to make clear about the basic design of the S350DB is that isn’t, in any meaningful sense, three discrete units. The satellites are completely dependent on the subwoofer to do anything and there is no prospect of mixing and matching the sub with other satellites because it won’t split the signal off any other way. If you buy it, you’re going ‘all in’ so to speak.

What this gets you is an active sub with an eight inch driver that also contains the input board and amplification for the two satellites. The figures quoted for this aren’t huge but they do suggest an interesting wrinkle to how the S350DB goes about its business. The specifications quote a 70W figure for the sub but then two separate figures for the satellites, which suggests that the S350DB is bi-amping, which is fairly racy for £250 if it is. The sub is fitted with an eight inch forward firing driver placed in a sealed enclosure. The partnering satellites use a four inch mid bass unit partnered with a titanium dome tweeter- a fairly unusual thing to encounter on a product of this nature. The relationship between sub and sat is completely fixed. There is no adjustable crossover- the exact figure isn’t stated but given that the sats roll off at 160Hz and this is the highest quoted figure for the sub, we can likely hazard a guess as to where it happens.

The connection between the satellites and the sub is entirely bespoke. Two umbilical cables are supplied and these send signals from the sub out to the speakers. Intriguingly, the cables are different for the left and right connections. The left-hand speaker uses a circular connection at both ends while the right-hand one has what appears to be an RS-232 plug at the sub end. The reason for this is that there is a selection on controls on the side of the right-hand speaker that allow you to tweak bass and treble and adjust the volume without having to find the remote or reach down the back of the sub, which is a useful bit of thinking. In fact, the only reason you will have to reach down the back is to make the input connections. The good news is that the Edifier sports a useful selection of them. There are optical and coaxial connections, an RCA line input and 3.5mm connection supported by Apt-X capable Bluetooth. While it would be nice to have an HDMI ARC connection (I’ve become rather keener on the connection since moving from GT60 Plasma where it worked seemingly when it felt like it to B7 OLED where it works all the time) but at £250, this is a competitive spread of connections.

The catch of course, is that the design of the S350DB does force any would be owner’s hand in terms of positioning. Edifier does supply a reasonably long set of umbilical cables but in order for the S350 to work in a practical way, the sub is going to have to be on axis with the satellites and close enough to your TV to take a signal from it. It’s far from the end of the world but it is something to take into account when looking at sound enhancement from your TV and something that more conventional solutions don’t really have to worry themselves with. Similarly, the chunky umbilicals will mean that wall mounting the satellites isn’t a realistic proposition either. The news isn’t all bad though. For the asking price, the S350DB is an impressively hefty piece of kit. The subwoofer feels like a device that would stand judgement as a conventional standalone active sub at the same money and, as well as feeling stout, there is a level of finesse to the way that it has been made that is very likeable. The ‘wood’ finish is of course a wrap and there is the faintest whiff of the G-Plan furniture that the MOD used to furnish army quarters with when I was a kid, but it shouldn’t prove to be too problematic to get it installed unobtrusively in most spaces.

There are some neat design aspects too. I really like the controls on the side of the satellite which is a really logical piece of thinking. The matching dust caps for the sub and satellites are also well thought out and give some useful continuity between two otherwise fairly different looking cabinets. Special mention has to be made about the remote too. It’s a hefty circular device with a metal top and a level of fit and finish that would shame some of the handsets I have received with rather more expensive devices. It does also serve to show why most remotes aren’t circular in that it’s extremely easy to pick it up in such a way as to impotently fire IR codes into your wrist, but it is a nice thing nevertheless. For the asking price, the S350DB is an impressively hefty piece of kit

The Edifier was set up with an LG 55B7 OLED TV and took an optical feed from that as the main source with the TV acting as source for terrestrial TV, on demand services and using the media server function with a library of compressed audio that is stored on a Western Digital MyBook NAS. A small amount of lossless and hi-res testing has been carried out via a Yamaha WX-AD10 Music Cast adapter. Bluetooth has been tested via an Essential PH-1 smartphone. The satellites were placed on a pair of Soundstyle Z60 stands and the sub placed on the same wall inboard of the right-hand satellite. Power was supplied via an IsoTek Evo3 Aquarius mains conditioner. Material used included broadcast TV, Netflix, compressed music on VBR MP3 as well as some lossless and hi-res FLAC. Normally, whenever a sub is involved with testing, a degree of tinkering will ensure that the best results have been achieved. The complete absence of fine tuning available on the S350DB sub, and the need to keep it somewhere relevant to the TV, means that this isn’t the case here. This is either going to be a weight off your shoulders or the start of the descent into ‘what would happen if I could do that?’ style madness. Isn’t audiophilia fun!

The good news is that the basic settings of the S350DB work, and largely work well. A 160Hz crossover is going to be something that would render the sub audible in its own right if it was too far off axis and it might be deliberate that the input board compels you to effectively simplify the job that the subwoofer has to do. This means that, under test, the Edifier has consistently displayed a crossover between the components that I’ve sometimes struggled to achieve with rather more expensive equipment. Watching Oblivion, the incredible noises that the drones make is all over this crossover point and the effect is still impressive and entirely seamless.

No less important is that the bass on offer is of rather higher quality than Edifier themselves seem willing to credit the unit with. The web copy describes the sub as ‘booming.’ Ignoring, for a moment, who might find the idea of that appealing, the sub, in fact, does not go boom. Instead, there is a well-controlled and pleasingly detailed bass response that extends from a point that is entirely competitive with affordable floor standers to the crossover point with no appreciable sense of strain. The result of this is that, after a fairly short period of time, you start to listen to the Edifier as a stereo system rather than a 2.1 system.

As a stereo system, where the S350DB excels is the creation of a believable stereo image. Compared to a single point source - even one broadcasting a stereo signal, the Edifier simply sounds more immersive and more believable than something where the sound is emanating from one place. There is no form of surround processing (and neither does Edifier make any claim that there is) but the effect is immersive in a manner that pulls you into film and TV soundtracks and lets you sink into the moment.

It does this while getting the basics of the upper registers right as well. There is a useful amount of fine detail on offer and dialogue is handled consistently well. Compared to some of the more expensive speaker setups that have graced this space, there can be a slightly hard edge to the upper registers and the sub loses some of that fine control but the levels you will have to hit in a room to achieve this are considerable and will be the point where you are likely to annoy your neighbours and other people in the house and have them intervene first.

Where the S350DB really pulls out an advantage though is music. I have long made it clear that I’m not really a fan of subwoofers being used in music and in a perfect world, this remains the case. In the world of choosing an audio system for £250, the S350DB and an Apt-X Bluetooth phone puts in a performance that is both very listenable and surprisingly technically accomplished. Once again, the basis for this impressive showing is the quality of the handover between the speakers and the sub. You once again feel like you are listening to a fairly well sorted stereo system rather than three speakers having a fight. Listening to the new Orbital album Monsters Exist is an enjoyable experience. The title track has enough weight and scale to sound right and it motors along with a decent sense of drive and timing. It isn’t subtle but it is a lot of fun.

Your choices for augmenting the sound of your TV at £250 are considerable and for many of us, we will be wanting something slim, wall mountable and possible with some video switching. As we have noted in the copy, the Edifier S350DB is none of these things. If you have a little more space for it though, it is hard to argue that sonically and I’m not sure what you can buy for the same price that offers more bang for your buck than this does. Throw in the solid build, useful selection of inputs and pleasing aesthetic and this quirky but entertaining system comes Highly Recommended.