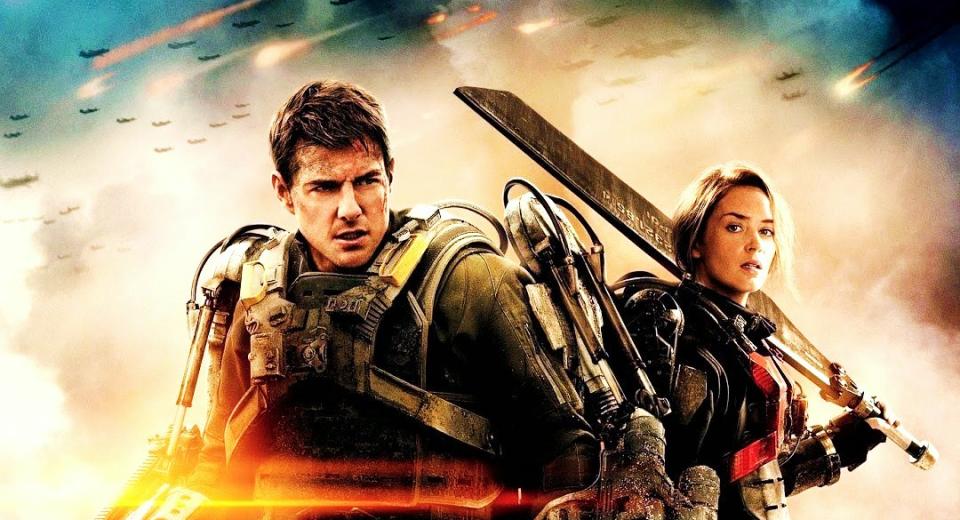 Cruise knocks it out of the park with yet another welcome pre-Summer sci-fi blockbuster, taking a great Groundhog Day / Source Code premise and injecting into it a hefty amount of D-Day / Matrix Revolutions end-of-the-world all-out-war mayhem.

Summed up effortlessly in the Live-Die-Repeat tagline, the future-set plot sees Cruise's never-seen-action Major slaughtered in a battle against alien invaders only to find himself waking up at the start of the same day, forced to repeat the same events until he dies, resets and starts again. Trying to break the cycle, he eventually finds that he may well be the key to winning the war.

Based loosely on the Japanese sci-fi novel All You Need is Kill (a far superior title), Cruise's vehicle takes the concept and runs with it, adapting it superbly to suit the actor's age, and shifting the tone to deliver more than just pure, relentless battle action.

Rather than merely drop you straight into brutal Platoon territory - which, admittedly, it very nearly does - the story smoothly segues into a lighter, more Groundhog Day-esque realm, maintaining an overbearing sense of urgency but also taking a more fun, entertaining path as it rollercoasters along.
It's this keen balance of sharp wit and escalating tension that ensures that Edge offers up across-the-board satisfaction, never allowing the humour to smother the proceedings and detract from the end-of-the-world backdrop, but also not taking itself so seriously that the Kill-Die-Repeat process becomes exhausting.

Ironically, considering that this is not based on a video game, it actually offers up a wonderful First Person Shooter profile, putting you in the thick of things in exactly same way that you might be in a game; dying, learning, adapting, gaining weapons, armour, power-ups and so forth. It’s superb.

With seamless, outstanding CG aliens and kick-ass action courtesy of some seriously awesome exo-skeletons; a relatively unusual London / Normandy-based setting; a frenetic but fun story that juggles comedy and consequence; and some committed lead performances, Edge strikes out as not only one of the best sci-fi actioners, original event movies, and most immersive features of the year, but also one of the most authentic gaming experiences ever to hit the Big Screen.

Edge of Tomorrow hits UK shores with a Region Free Blu-ray package that provides the film with both a 1080p/AVC-encoded 2D High Definition treatment on the first disc, and a 1080p/MVC-encoded 3D alternative on the second, both framed in the movie’s original theatrical aspect ratio of 2.40:1 widescreen, and both demo quality in every way; with the native 2D content looking just that tiny bit better than its 3D conversion.


Sheer perfection, Edge of Tomorrow’s video presentation is demo-worthy in every respect, with the 2D easily one of the best of 2014.

Detail is impressive right from the get-go, lapping up every little flourish, strand of hair, battle scar and wrinkle; providing astounding representation of skin textures, clothing weaves, armour damage, and background nuances, with the battle-ravaged landscape coming to life in every shot. There are no signs of any digital defects or anomalies; the image promotes outstanding clarity in everything from the close-ups to the longer shots.

The colour scheme has been skewed to reflect the future battle-based scenario (and incorporate British weather) but still allows for healthy, frequently tanned skintones, strong vibrant primaries sparking up through the dirt and grime of the chaos. Black levels are strong and offer up excellent shadow detail.

On the 3D side, things are not quite as clear-cut. Conversions have come a long way since the days of Clash of the Titans, but Edge of Tomorrow doesn’t strike out as one of the best of the best, unfortunately, instead remaining sporadically impressive but otherwise merely very good – normally something that would be commended but for the sheer perfection that the 2D affords; by comparison, the 3D alternative is just not as amazing as you might have hoped for. Sure, there are still some excellent examples of background depth, with the battle-scape coming to life across – and into – the frame.

Characters have a well-rounded quality to them; a pleasant dimensionality, and objects too are promoted well, all with no problematic 3D side-effects, even during the battle sequences. The criticisms are hard to level at such a decent rendition and come only in the way that the 3D never quite wows as much as you would hope for in a movie as innately jaw-dropping as Edge is. With such picture-perfect 2D on offer, the likelihood is that you’ll choose that over the 3D counterpart; which is more a reflection of the former’s perfection than of the latter’s shortcomings. Either way, though, you’ll likely be pretty blown away by Edge of Tomorrow. Dialogue comes across clearly and coherently throughout – from the shouts to the whispers to the mid-battle yells – largely rising up over the fronts and centre channels when necessary, in spite of the fact that the track promotes some astounding effects and score work which keeps you engaged and positively engulfed at every stage.


With a perfect 2D video presentation (and decent enough 3D counterpart), it’s only fitting that we get a stunning audio presentation too.

With the whole Live/Die/Repeat theme we get correspondingly incessant effects attacks, pounding at you with explosive battlegrounds, raging aliens and detonating grenades; thundering weaponry and crashing ships – the LFE channel doesn’t let up; surrounds are fully-utilised, and dynamic design is undeniably perfected. It comes at you from all angles – and from the rear as well – with a fully immersive strike that never lets up. The score too gets plenty of room to breathe, never invading or encroaching on the rest of the material, but ever-present in the background to offer much-welcome accompaniment. It’s an all-round piece of utter demo-worthy reference material which will hopefully also blow you away.

Although not quite brimming with all of the comprehensive extras that you might have hoped for - a Commentary or two would have been welcome, particularly given how engaging Cruise commentaries can be - there's more than enough here to entertain you way beyond the end credits roll.


Decent, but far from comprehensive extras round out an otherwise exemplary release.

The main On the Edge with Doug Liman documentary provides the backbone for the extras, running at 43 minutes in length and providing a wealth of background into the production, with plenty of interview segments, behind the scenes shots and effects breakdowns. A trio of considerably shorter Featurettes offer up some peripheral background, with Storming the Beach looking specifically at the main assault (and giving us an alternate version of the footage too); Weapons of the Future looking at the arsenal dreamt up for the production; and Creatures Not of this World looking at the aliens in the piece.

The disc is rounded off by 8 minutes of Deleted Scenes which are worth checking out, even if they don't all include finished effects, as well as some Preview Trailers. With a little hindsight - and maybe a second viewing as there's plenty of re-watch value - you'll hopefully come to realise that Edge of Tomorrow is not only one of the best sci-fi actioners, original event movies, and most immersive features of the year, but also one of the most authentic gaming experiences ever to hit the Big Screen.


With reference video and audio, there's no doubt that this Blu-ray release will give you every opportunity to Watch-Enjoy-Repeat.

Warner's Region Free UK Blu-ray release boasts stunning video and audio, a decent enough 3D component, and a solid selection of extras, making this a must-have purchase for fans of the film and a highly recommended blind buy for any- and everybody else. Pick this up, and watch it. Now.