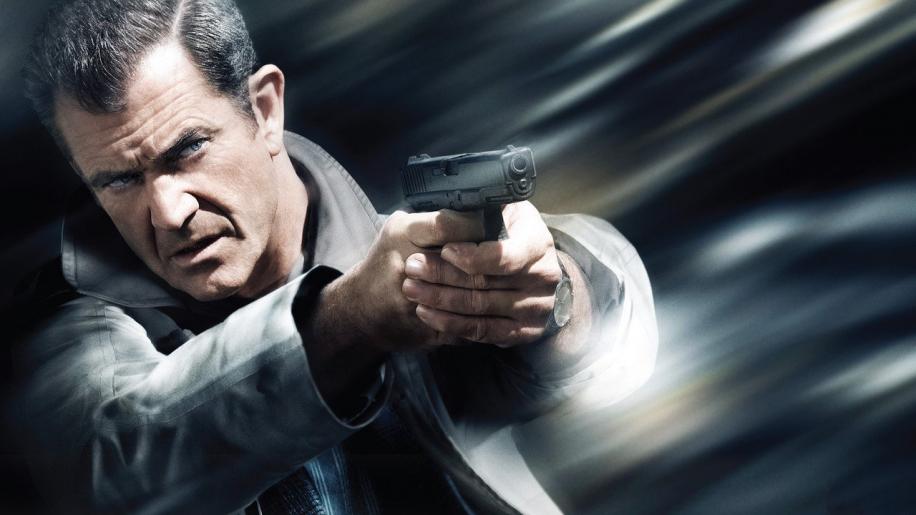 Mel Gibson makes a welcome return to the screen as an actor in the thriller 'Edge of Darkness' after taking a few years off to direct such movies as 'Apocalypto' and 'The Passion of the Christ'. He may be a bit older and with a few more wrinkles but he still looks good on camera. The intervening years have succeeded in making his face look more interesting and lend credibility to his portrayal of a character with a grown up daughter.

'Edge of Darkness' makes its debut on UK Region free Blu-ray so those of us who missed it at the cinema have a chance to see it in high definition in our own homes.
It's based on the multi award winning 1985 BBC TV series which starred Bob Peck and was directed by Martin Campbell, who went on to greater things with 'Goldeneye', 'The Mask of Zorro' and 'Casino Royale' among others. Apparently he wanted to bring 'Edge of Darkness' to the big screen for some time, so hooked in writer William Monahan to help adapt it for the 2 hour format and a modern day audience.
Not only did they manage to persuade Mel Gibson to take on the leading role, they were also able to twist the arm of London lad Ray Winstone with a meaty part in the movie after Robert DeNiro turned it down. John Huston's boy Danny brings his excellence with slimy menace to the party as well.

So we have an impressive cast to start with, but what's it all about?
Thomas Craven (Gibson), a single father, has been a Boston homicide detective for many years. His 24-year-old daughter Emma (Bojana Novakovic), his only child, is gunned down before him at his own front door. At first it appears that Craven was the intended target but he soon uncovers evidence that leads him to think differently, and he decides to pursue the lead at all costs. He learns that his daughter led a secret life that led to her murder and quickly finds himself confronted with a shadowy world of corporate collusion with government sanctioned murder. In the process he collides with a secret government operative, Darius Jedburgh (Winstone), whose job it is to clean up and hide any remaining evidence. Craven's singleness of purpose in finding answers about Emma's death becomes a transforming experience that changes his life for ever.

That's all I'm saying, as there's a whole generation who will be unfamiliar with the original TV series, which was quite a gritty affair, and although certain changes have been made to suit the big screen I certainly wouldn't want to spoil anyone's enjoyment by giving away too much.

Mel Gibson turns in a very convincing performance of the intense variety as the single minded cop who prefers the direct approach rather than the diplomatic and this places his own life in danger - adding to the hook of the movie. He proves that he can still hold his own in the fight sequences as well as in the more tender, sensitive moments when he has to deal with the loss of his daughter. I'd generally thought of Mr Gibson as somewhat of a lightweight actor, even taking into account his portrayal of William Wallace in 'Braveheart', but here he proves that he's more than just a pretty face and that age has brought with it the maturity of character allowing him to take on more serious roles.

Ray Winstone plays Jedburgh with a calm menace as the 'sweeper up' who's called in to muddy the waters whenever some revelation might affect the security of the nation. You also feel that he's not entirely evil and that he's really on Craven's side. Indeed, there's a nice line in dry humour that exists between the two characters. When Craven sardonically thanks Jedburgh for not killing him, Jedburgh (with his back to camera) raises his glass in a mock toast. A lesser actor than Mel Gibson would have had the movie stolen from right under his nose by Ray Winstone as interest levels do seem to spike whenever he is on screen.

Another actor of note is Danny Huston. Nobody plays the face of corporate corruption like him. As the head honcho of Northbrook, he has that remote, cold, disdainful look of someone who is higher up the ladder and who doesn't care what happens to anyone else as long as he achieves his objectives. I've seen him in several movies over the last few years and he always makes you believe his character is bad to the core.

Given that Martin Campbell had a dry run (not so dry when you consider the awards he picked up) with the TV series, he manages to hold your attention for the duration of the movie. Just when a slowly paced sequence involving some plot explanation has taken place, he adds a 'bump' to the timeline - usually in the form of some unexpected action of the violent type - to recover the modern audience's interest.
Some of the devices used to deal with Craven's dead daughter are pure Hollywood and some are quite sentimental - but it would be churlish to be cynical as they do reflect the workings of the human mind in such circumstances. Again, I won't spoil the movie for anyone by revealing too much.


I must admit to having enjoyed 'Edge of Darkness' as a good mystery thriller and felt that my intelligence wasn't insulted by the way the audience was fed enough bait to make working out what's going on not too difficult. It didn't set out to be high brow but to be understood by a general audience and to deliver enough excitement to make it all entertaining. The pacing is well considered and the action sequences are edited in such a way as to give you a good view rather than rely on some of the choppy cutting we've become accustomed to in the last few years. Think 'Quantum of Solace' and you'll get my drift. There are a couple of moments, such as the murder of Craven's daughter and another involving someone being mown down by a car that may not be for those of a nervous disposition (such as my other half who leapt off the sofa) or younger children.
So, if you're looking for a good movie with a bit of intrigue to enjoy on a Saturday night then 'Edge of Darkness' could well be your glass of milk. Watch the movie and you'll get it.