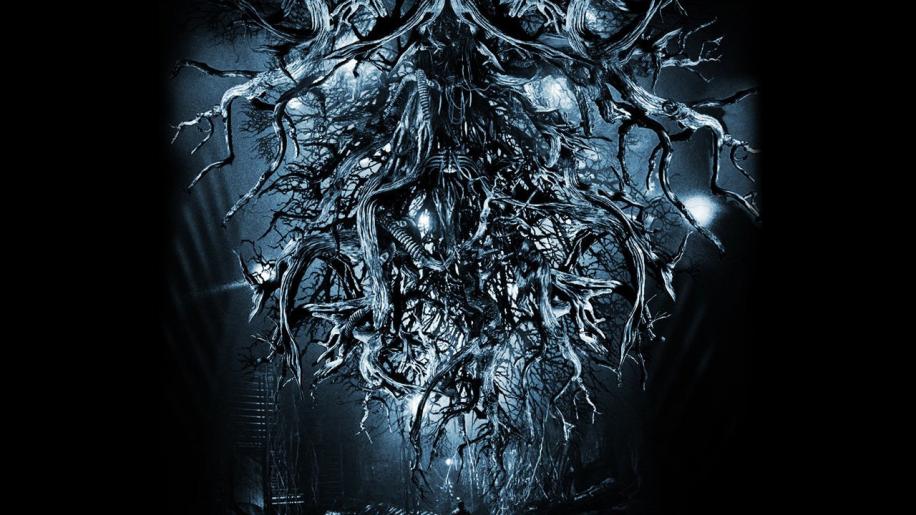 Most Science fiction films come in either of two varieties. The first is the big screen blockbuster: primarily a cash-cow, it monopolises the summer traffic through the cinema and dominates the movie press through sheer scale and unprecedented advertising power. These behemoths usually carry with them financial backing that is akin to the annual budget of the average small island nation, and all for a mere six weeks worth of celluloid. The second variety is a more humble creature: usually created by a small scale crew, the plot and filming has to be developed around the monetary constraints of its genesis. Eden Log falls very much in line with the latter of these two production archetypes, being largely unpublicised and as a consequence passing many a cinema goer by.

A French science fiction piece from 2007, Eden Log is a twisted narrative that aims to take the viewer on a journey of discovery of sorts along with the main protagonist. In terms of genre, it is very clearly science fiction, coming replete with all the hallmarks of your average dystopian future thriller. Proceedings open with a man struggling to gain a hold of his senses, having just awoken and being unsure of his surroundings. A light blinks in the darkness and this piercing beam slowly continues until the figure manages to scramble to it and utilise it to further see into the gloom. In the opening sequence, there is no dialogue as he remains completely alone. All we are left with is the image of a man, half naked and covered in mud and clay, unable to comprehend where he is or what befell him that caused this situation. By its very nature, this is route one sci-fi. If complex plot exegesis is held back for the large scale blockbusters, then those film makers keen to explore the artsy themes of the genre inevitably have to fall back on invention through mystery. That which is not explained will likely hold the viewer's attention for as long as it takes the central figure to discover the truth. That's the theory anyway.

Directing duties are taken by first timer Franck Vestiel, who also co-wrote the script with fellow first time writer Pierre Bordage. Clearly there is no existing pedigree to the project, but all luminaries of the industry must start somewhere and the low budget sci-fi has in the past given us some of the most creative of directors that have yet worked in cinema. The plethora of names spring to mind that prove this point, thus to dismiss the film out of hand would surely be churlish, for his part, Vestiel does a reasonable job. Often I would add the additional caveat of “with what he has been given” or “considering the source material” or similar, but having been involved with the writing of the piece, Vestiel can't hide any part of his shortcomings with this project behind such excuses.

The concept of a mysterious stranger, unknowing of both himself and the world around him may seem clichéd but it serves a clear purpose. What Vestiel has tried to create is an atmosphere of inherent unease and confusion. The opening quotation from the bible hints at the themes of paradise lost and a fall from grace as it exclaims “So the Lord God banished him from the Garden of Eden to serve the ground from which he had been taken - Genesis 3.23”. This is mirrored by the way in which the man extricates himself from the mud, as if he were Adam arising from the earth of the land and being born anew. As ever, the problem with pushing too far into the territory of biblical or prophetic simile is that it cannot be sustained continually or overused, for fear of becoming too obvious and thus falling into the category of the absurd. This is, after all, a piece of entertainment and not a copy of Watchtower. Thankfully, as soon as this opening sequence is over, the scripture is dispensed with and a straightforward narrative is embarked upon.

What follows is reminiscent of a student arts project, as the disorientated individual stumbles across the workings of his surroundings amid increasingly inventive cinematic uses of lighting on the part of the director. The nameless figure pushes through gates and struggles to understand images, all the while Vestiel makes full use of the darkness which envelopes him, the light which is attached to his shoulder and the projected pictures of faces sporadically popping out from seemingly destroyed machinery to inform him, and the viewer, of something we have yet to make sense of. These titbits of information are leaked slowly throughout the film, gaining momentum and importance until they eventually make up a picture that illuminates both his and our paths. Not that there is much in the way of literal illumination to be found, as the constant delving into darkness is something that rightfully feels oppressive and confusing. Much like an episode of The X Files, the lack of light not only helps to focus the viewer on specific aspects of the image, but also covers the cracks of any make up or special effects that aren't of the highest calibre. Our protagonist is not alone in the depths of the mire and the noises that emanate from the deep warn of what's to come. Given the small budget of this film, the shadows become invaluable once the phantom howler is to be seen on screen, as they hide many imperfections.

The problem is that the creatures of the depths simply aren't that scary. I won't go into too much detail, but what are essentially humanoid monstrosities look and feel far too, well...human. They lack the feral nature that their growls and squeals denote and once drawn into a confrontation, the direction either dwells on them, making them appear frail and no more than men in suits, or the camera flashes so fast that all is a blur and there is literally nothing to actually become frightened of due to the lack of image stability. At no point do we get to see the actual results of what these creatures' attacks look like and as such, we are never privy to their supposedly dangerous capabilities. The screaming of helpless victims and howls of animal ferocity only go so far to persuade the viewer of a beast's power.

Ultimately, the end result reminded me very much of a survival horror videogame in the mould of Resident Evil or Silent Hill. Our protagonist starts at the bottom of a great complex and has to move from level to level, avoiding guards, fighting monsters and slowly piecing the puzzle together of who he is, where he is and what ultimately to do about these revelations. There are themes explored that are of note and can be interesting to those who prefer to focus on the essence rather than the execution of the film. What is a society's responsibility? What is the cost of progress? Ecological responsibility and playing God are all touched upon in various ways. The downside is that no one issue is pushed to the fore enough to be made an example of. This is less a film that tackles these thorny issues as opposed to one that merely leaves you with them. Like a copy of New Scientist that ends at the headline, the lack of substance beneath the suppositions is palpable. This vacuum of genuine debate is filled with art house shots of shadows that, while stunning, do little more than fill screen time. The addition of a female character that tells us nothing, the side theme of mutation and regression to an animalistic state, all add little to what could have been a genuinely interesting and thought provoking narrative.

Eden Log is not without its merits. Being a fan of some fairly schlocky sci-fi, I can appreciate much of what is on offer. However, for those looking for more than a husk of a good idea, then I'd suggest there are other low budget offerings of a similar nature to be investigated first. The saving grace for me was the cinematography, which at times was reminiscent of an art installation as opposed to a piece of cinema, such was its stark creativity with shadows. Its not enough to save the film as a whole, but it aids the viewing experience and draws us away from the hollow narrative structure. The end result is a sometimes visually striking amalgam of vignettes from other science fiction films, wrapped inventively in an oppressive atmosphere that unfortunately fails to engender the fright factor needed to alleviate the story's lack of substance. Flawed, but not totally worthless.