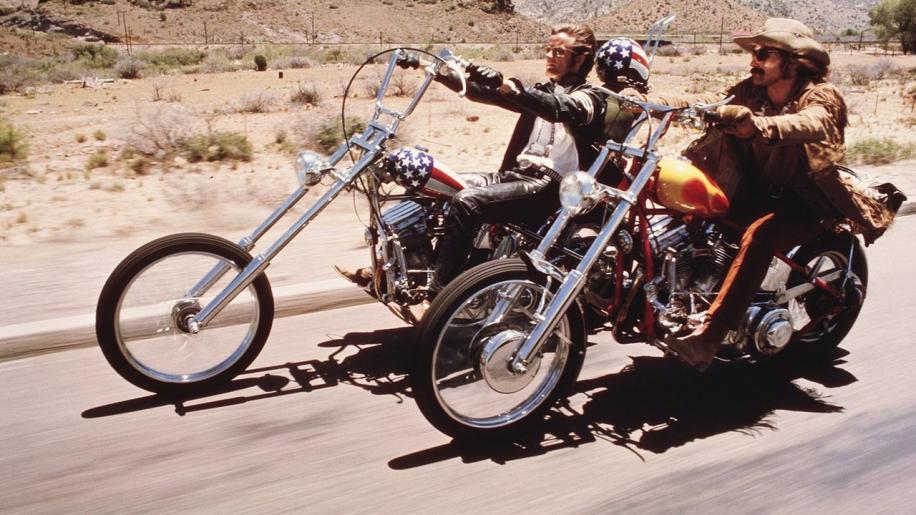 This varies from bearable to bad to bloody awful. Grain, dirt, scratches, bland colour and some artifacting are all present. This is a shame as the direction is sometimes wonderful. A scene against a pink sunset has impact, but is grainy with some haloing. Scenes of the mardi-gras, however, are utterly dire in all aspects. For those who like this movie, a true digital restore is needed, badly. One thing rescues the sound of Easy Rider. The soundtrack. Quentin Tarantino may have the rep for choosing just the right pre-recorded track, but Easy Rider did it first and better. The seminal Wild Thing by Steppenwolf is just perfect. The movie's actual sound is kind of scratchy, or stretched. It's like there is a really good, detailed track there somewhere, but budget constraints limited the fidelity by quite a bit. This is normal for movies of this age, though. Let's not forget, its 35 years old. The best extra is the music CD. Every track a classic, every one thoroughly enjoyable. The Making of... “Easy Rider: Shaking the Cage” documentary is good, too. Remarkably candid and very insightful, I enjoyed this documentary more than the movie itself! There are gems of little inside info here which makes Easy Rider a much more tolerable watch. One part has Peter Fonda describing how his mother committed suicide by slitting her own throat. He resisted some lines being put into the movie as he did not want this to be public, and understandably so. However, Dennis Hopper forced the issue, and we can see the result in the surreal scene I mentioned earlier - where Fonda asks of the statue why she did it. Powerful stuff, now that I understand the true meaning. The British film institute book is a very informative, detailed look at Easy Rider from just about every aspect. I didn't read the book until I wrote the review up till this point as I thought it would skew my opinions. As it is, the book does have some interesting points, but I do think that a little too much can be read into something, especially a movie. Perhaps if I was older, or American, or watching Easy Rider as it was released in 1969, I would empathise more. As it is, I feel curiously adrift from Easy Rider, neither caring for its characters or the world they live in. Despite that, this 35th anniversary release does have its good points and is a definite buy just for the documentary alone. For the rest of us, or at least for me, I wonder what all the fuss is about.