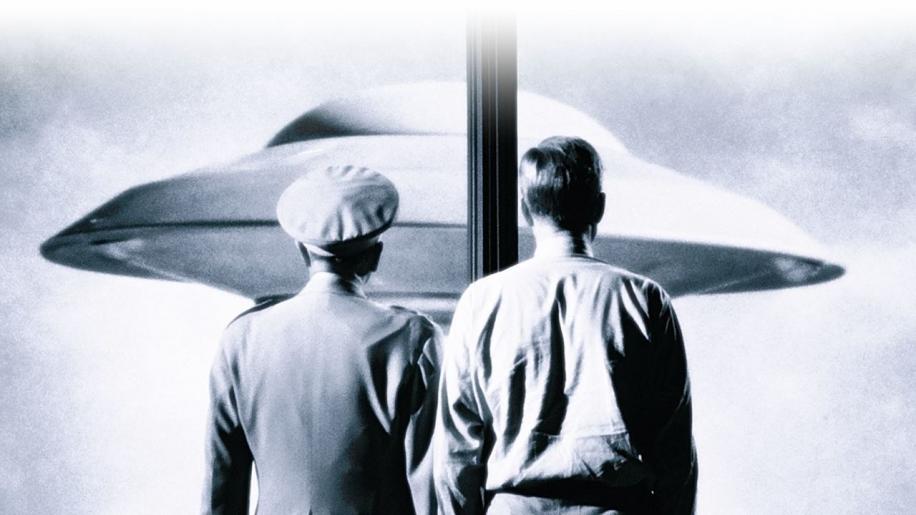 Having recently reviewed the Harryhausen feature “It Came From Beneath the Sea” I was only too pleased to perform the same honours for the second of his three black and white technical effects works for Columbia (which comprised “It Came From Beneath the Sea” (1955), “Earth Vs. the Flying Saucers” (1956) and “20 Million Miles to Earth” (1957) which would see his work evolve and ultimately flourish. Here we see him move away from animating otherworldly creatures and simply focussing on the craft they have used to transport themselves across the galaxy. It is something that sounds all too simple, as surely they are merely inanimate objects and thus somewhat sterile? However, Harryhausen allows for a degree of fluidity by having his craft move at angles and ebb and flow, to give the impression that they are actually being flown manually by a sentient being, which proves to be very effective and injects a degree of anthropomorphism to the machines when compared to other saucer films of the era.

Talking of which, one cannot mention UFO sci-fis of the 1950s without drawing some kind of comparison to the two commanding influences and progenitors of the scene, those being “The Day the Earth Stood Still” (1951) and “The War of the Worlds” (1953). Whilst the similarities might seem obvious; flying saucers, alien beings etc there are in fact many dividing lines between the films. For one, “The Day the Earth Stood Still” was a far more thoughtful affair than this. Whilst it carried a firm message of caution and a warning against increased aggression with its Christian themes, here the emphasis is far closer to “War of the Worlds” in that our extraterrestrial cousins have nought but malevolent intentions in mind. It almost seems strange to watch given what surely must have been a watershed moment of enlightenment of the pacifistic 1953 masterpiece, that a later film simply reverts to standard Martian invader thrills rather than continuing the more cerebral route.

This is very much shoot first and ask questions later in the classic American mould of such films. The scene where a saucer first lands at the launch, an alien departs slowly and unthreateningly (to my eye) and is promptly shot, with what looks to be an anti aircraft gun, before it can do anything, let alone utter a word - be it friendly or otherwise. Now the film escalates briskly (as it surely must for an 80 minute feature) and said aliens chums are now a mite miffed and promptly proceed to dissolve a few army men with their ray guns (that are pleasingly traditional and shoot from their arms with the accompanying noise that I'm sure will be familiar to all) and blow up a few buildings. Our film has now officially started and any sign of potential deviation towards a more peaceful meeting is well and truly shot (literally!). Realistically, one could hardly expect such a hark back, as to emulate “The Day the Earth Stood Still” would surely have resulted in unfavourable comparisons to the acclaimed classic. Instead we are given little doubt of the direction the film will take, from the ominous opening notes that accompany the credits that roll at the beginning of the film, we are in true little green man territory here as the voiceover booms “Since the beginning of time, man has witnessed and recorded strange manifestations in the sky, and has speculated on the possibilities of visitors from another world”. I suppose there could have been an air of subtlety about whether it is the aliens themselves who are shooting down the interstellar exploration rockets of our hero, the scientist Dr Marvin, and why they would do so, but that is quickly glossed over in favour of the push forward to greater conflicts and ultimately greater screen time for Harryhausen's creations. A parked space craft with friendly visitors would hardly have warranted the effects wizard's time.

So to the film itself, it remains fairly standard fare and to be honest quite run of the mill in many ways. It contains the same tussle between science and the military that was apparent in the previous years Columbia Harryhausen feature “It Came From Beneath the Sea”. However for those who think this is simply substituting the giant octopus for invaders from outer space there are a few key differences. For a start in the aforementioned previous film, the emphasis seemed to fall squarely on the triumphant military man in the end. Science was enlightened and cautionary but ultimately it would be old fashioned American heroism from a single man in uniform that would win the day and he would do so with a big enough weapon rather than guile. Here, however, the scientist is the one who has to find a chink in the armour that is a fair bit more ingenious. The scientist in question is played by Hugh Marlowe, who many will probably recognise from “The Day the Earth Stood Still”. The rest of the main cast are similarly entrenched in sci-fi accolades with Joan Taylor, playing Dr Marvin's doting wife, going on to star in the classic Harryhausen creature feature that would truly break his name into the mainstream, namely 1957s “20 Million Miles to Earth” that brought us face to face with the tragic and horrifying figure of the ymir. Please don't be under the impression that the female role here is anywhere near as strong as that of “It Came From Beneath the Sea”, it being instead placed firmly in the standard worried woman bracket. Similarly, though perhaps a tad out of character for his previous role, Donald Curtis reappears, having played the scientist so well in “It Came...” the year prior, here he is handed the role of the military man rather than the thinker that he so ably performed before.

So whilst there are differences between the films, the pedigree that is entrenched in the similarities we see is great. The moments where this film raises its head wholly above the level of its predecessor are clear to all. The direction, for example, is far wider in its scope. The aforementioned feature was somewhat restricted by its sea based antics as there are only so many ways to film a man looking out across the ocean. Here we are greeted with a far more traditional film and that is by no means a criticism. The staple shots are there - when a man is in control his hair is slicked back perfectly but when he is flustered, a lock will fall across his face. The direction as such is entirely true to the genre and gives us just enough flair to get by, without upstaging the formula that has been laid down for many a film of this type.

This would all count for nought though if the writing weren't up to a decent standard and I'm pleased to say that, though antiquated in some ways, it holds up very well. It may have little bearing on the film but it becomes of particular interest to analyse it with regard to the writing staff and their lives. Curt Siodmak (screen story) had previously penned “The Man with the Atom Brain” (1955) that was part of a double bill with “It Came From Beneath the Sea” (1955) upon theatrical release across America. This connection with the prior Harryhausen feature is compacted by the presence of George Worthing Yates, who co wrote that film as well. The most interesting though, has to be Bernard Gordon. For many, the films of this genre were thought to be a simple allegory for the “Reds under the bed” etc. Substituting the threat of a communist invasion, that many believed could have been entirely imminent with that of little green men and invaders from farther afield. However this surmisal is turned on its head with the revelation that Gordon was not only once a member of the communist party but also was blacklisted for a total of 15 years. One can see the brilliance of the man who went on to give us the classic “Day of the Triffids” (1962), generating momentum here as the characters desperately struggle for an answer to the quandary of how to defeat this unwanted invading force.

This is not a metaphor for an American battle against other ideologies etc. If anything the writing of the aliens as appearing humanoid rather than grotesque caricatures, coupled with their logical reasoning and genuine reasons for coming to earth instead points us towards an altogether different hypothesis. Perhaps this was instead intended to highlight the hypocrisy of reasoned barbarism and subjugation. Whichever way, I enjoyed this film almost as much for its rich history and the backdrop of the men and women who created it as I did for its kitsch but underrated sci-fi thrills. That it might be interpreted in another way than the standard run of the mill saucer flick is merely a bonus and should not distract the viewer from what is an enjoyable companion piece to the more acknowledged cerebral classics of the genre.