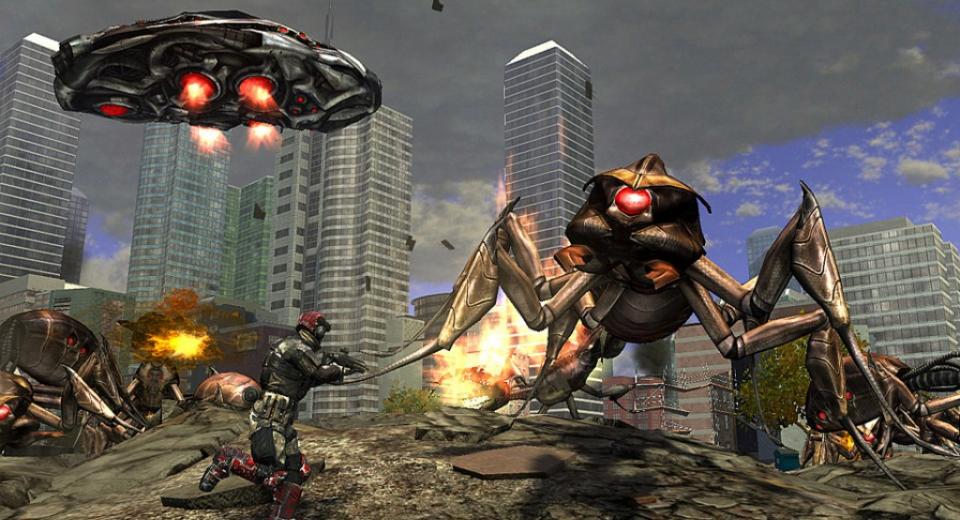 It’s not often that games are released with a lowered price tag and offer gamers a solid experience, but that’s what the Earth Defence Force series has been all about. No longer in the hands of Japanese developer Sandlot, the series has dropped into the hands of Vicious Cycle. To say their back catalogue is colourful would be an understatement, most memorably they produced the recent Matt Hazard games (I did say it was ‘colourful’).

Publisher D3 obviously sees some potential in the developer though to carry the franchise forward and keep the ethos of the series alive. Not much is seen about these games in terms of previews and promotional material, which is unsurprising really. The titles have never received much critical success but there have been a select few out there who enjoy the mindless fun offered, so there’s some demand for the franchise it would seem. So will Insect Armageddon offer up some mindless fun once again, or will the game bring about an armageddon in the gaming world?

There’s very little story to the game other than the planet is being overrun by over-sized bugs and robot bugs (known as Ravagers), however they came to be you will never quite know, and it is your job as Lightning squad to clear the mess up. On your travels you will have to combat giant ants, which fire what looks like Irn-Bru at you when you get too close, and gigantic daddy-long legs amongst other creatures. As Lightning, you have access to four classes throughout the game; Battle (Heavy weaponry), Jet (Jet pack/Reconnaissance), Tactical (Technical Support) and Trooper (Light Weaponry).

There’s not a great deal of difference between each class as they can all use similar weapons upon unlocking them but there are enough to keep you switching between them regularly. One mission you might be floating around like a dainty butterfly as the Jet class and the next you’ll be charging through cars like a crazed rhino as the Battle class. In order to unlock the weapons you will have to complete the game on each difficulty level and also repeat certain levels, so the game has some sort of longevity to it.

Whilst there’s nothing actually wrong with the graphics throughout EDF they aren’t exactly top notch, but you can’t expect triple-A standard when talking about a low budget game. The overall quality of the game suits its arcade feel and there’s never a moment where you find that the graphics are an eye sore or put you off of the general experience. Thankfully, the slowdown and running issues have gone from the games of old so don’t expect any on-screen lag when your screen is full to the brim with adversaries.

Destruction plays a big part throughout missions as nearby buildings can be brought down after receiving a certain amount of damage from your team or the enemy. It’s good to see buildings crumble around you as it adds to the tactical elements of the game and heightens the drama, but some of them come down far too easy. With one weapon, it took six shots to bring a whole structure down which seemed a bit too generous given that it takes silly amounts of ammo to bring down a Ravager drop ship.

The game follows a general pattern of; enter area x, y or z then explore a crash site or hold a certain waypoint until you get further orders. These orders are usually identical to what you have already just done for the past ten minutes, so you will probably take a break between each bout of playing.

There are three difficulty modes for you to trawl through, but the hardest setting will more than likely be played only by EDF veterans who embrace the challenge of dying every minute. On the easiest setting branded ‘normal’ the game presents very little challenge at all with enemies being destroyed relatively easily, ammo being unlimited and having numerous weapons to select from. The weapons are creatively designed with grenade launchers that spam their ammo left right and centre and homing SMG’s to mention but two.

There is however a problem with the weaponry, and this is that you feel disconnected from them; you don’t actually know you’ve fired them or not half of the time. You get no feedback via vibration from the controller that you’ve fired, and the sound of your own weapon fades into nothing so frequently that you’re only aware you have discharged your weapon when you need to reload or if you watch the muzzle flash every time. They do plenty of visible damage to the enemy though, as they are downed with little force and any explosions they get caught in will send them flying back in pain.

Round every corner you’re likely to be treated to a section of dialogue, which is filled with the usual Eastern-inspired cheese, so much of it in fact that the game may as well come with an endorsement from Dairylea. Somehow though, the script manages to derive humour from the simplest and unlikeliest of places so you may be quite surprised when you find yourself chuckling at the Intel guy. There is one problem with the script though; when Lightning receives orders they are always ‘Oscar Mike’ when they are proceeding to the next checkpoint. Granted this is a renowned military phrase, but does every game since Call of Duty have to use it? It might not be a problem for everyone, but after hearing the phrase several times it can begin to grate and become annoying.

Disappointingly the single player mode doesn’t last too long and many won’t want to try the higher difficulty settings due to the game’s ruthlessness. There is a saving grace though and that’s the co-op mode over PlayStation Network that offers three players (why not four?) the chance to fly through the campaign together or play survival mode. It’s likely that this will be where many will spend their time as human players will make those harder levels less demanding and more rewarding.

All in all, Insect Armageddon is not entirely a bad game. Yes it has its flaws and it doesn’t have a great story but what people often forget is that this game has tonnes of arcade appeal. Taken at face value, you’d be hard pushed to find any other game out there at the moment that offers simple, shooting and destructive fun that can be enjoyed with your mates online. Given its low price too, it’s hard not to recommend the game even if it is just to try it out and blast through the campaign.

The low budget series takes a dramatic turn that sees a new menacing enemy invade planet earth, causing havoc in the USA. Despite having a lack of depth and overall quality, the game is full of simple destructive fun that offers quite a challenge when you up the difficulty level. For a reduced price tag, the game suits the series perfectly and should be tried by many despite having a terrible name.