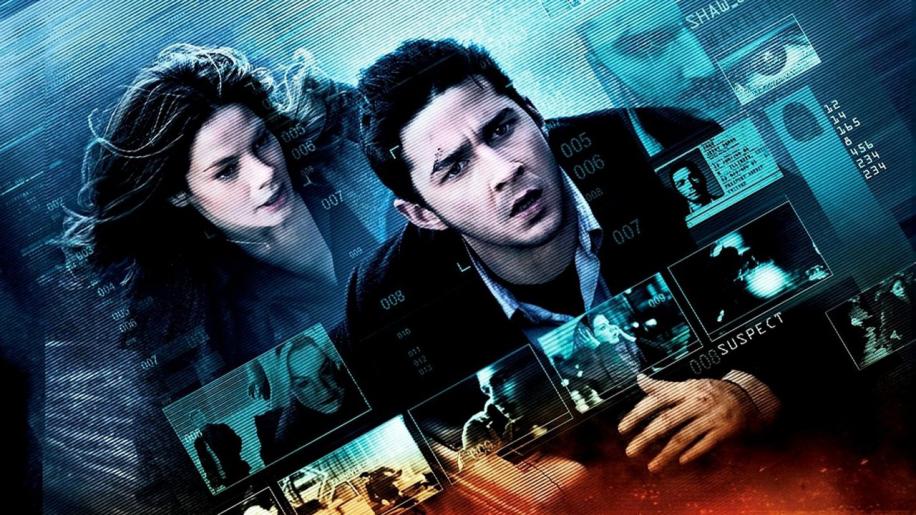 Film trailers these days give away far too much. Most people who watch modern trailers can piece the MTV-spliced fast-cut snippets together in their head to enough of an extent to be able to figure out the best part of the narrative and most of the key action scenes. A couple of decades back trailers were still just about tantalising you with what the movie had to offer, giving you just a taste of what to expect. You might see twenty seconds from a couple of different key scenes, but you didn't get two seconds from thirty different scenes like you do these days - almost enough flash frames from the movie to piece together the entire film in your head. Sweeping epics stand a better chance of keeping you guessing because they have so much material to offer, and some Blockbusters fare better than others as well - J.J Abrams did well at keeping us intrigued with the countdown scene from the beginning of M:i-3, which was showcased in the trailer (even if the end result was a little anticlimactic) whereas, conversely, the recent final trailer for his eagerly anticipated Star Trek prequel gives you enough material to figure out over half of the movie, as well as glimpses of the final act action sequences - but for the most part, modern trailers ruin the surprises offered by many movies, from comedies to thrillers. The trailers - both teaser and theatrical - for Eagle Eye did a superb job of giving you just a hint as to what to expect, without giving away anything significant. I was intrigued.

Jerry works at a copy shop. He whiles away his time playing poker with his co-workers and sketching, but he can't hold on to a girl, can never seem to pay his rent and generally feels like his life's a bit pointless. But when his Stanford-educated, medal-awarded identical twin-brother dies in an accident, his whole life is turned upside down. Terrorist munitions get delivered to Jerry's flat, millions get deposited in his bank account and all-of-a-sudden he starts getting mysterious phonecalls from a seemingly omniscient woman, who gives him precise orders should he wish to stay alive and out of jail. Rachel is a single mother struggling to both keep her job and also take care of her young son. And when she puts him on a train to go and play with his school orchestra at the State of the Union address, she thinks she can finally let her hair down for a couple of days. But when the same mysterious woman starts phoning her as well, threatening her son's life should she not comply with her orders, Rachel's life is also put in turmoil. “You have been activated.”

Jerry and Rachel do not know each other, but are thrown together by this enigmatic 'controller', who sends them on a hell-ride across the state, with both the police and the FBI hot on their trail, and with their every action being somehow monitored by this God-like entity. Is Jerry secretly a sleeper terrorist? Is this a case of mistaken identity, where he is suffering for his brother's sins? And what does the fairly innocuous Rachel have to do with it all? With no answers to their numerous questions they struggle to survive against the odds and try to get to the end of this whirlwind journey to somehow get their lives back.

Eagle Eye is not exactly a masterpiece, but it is quite a cleverly constructed hi-tech thriller that succeeds in delivering non-stop entertainment. Mixing hints of Enemy of the State with Die Hard 4, with a little of Hitchcock's North by NorthWest thrown into the pot, the end result is a flashy, futuristic action-thriller that really hits the mark. With the plot largely evolving around the two protagonists, and viewers only really knowing as much as these two know - i.e. not a lot - suspense and intrigue is kept piqued throughout, leaving you guessing as to where on earth things may go. Sure there may be a few plot-holes, and some people may not like all the answers they get at the end of the tale, but it is a hell of a ride to get there, with some tremendous chases sequences and a frantic pace that simply never lets up.

Arguably, what really makes this work is the main character Jerry Shaw, as embodied by Shia LaBeouf. LaBeouf does everyday-man hero really well, following on in the footsteps of the likes of James Stewart, Harrison Ford and now Cary Grant (with the films Disturbia/Rear Window, Indiana Jones - from his part in the 4th movie, and now Eagle Eye/North by NorthWest). He's not a trained fighter, an ex-military-type, a rugged Clint Eastwood hero who is simply better than everybody else, he's just your average guy who gets into extraordinary situations and, somehow - often through blind luck - fathoms his way through. If Matt Damon and Daniel Craig are the superspy stars of the new generation, Jason Statham is the action star, and Leonardo DiCaprio the heavyweight actor, but LaBeouf is definitely the new everyday-man hero. His character's desperate plight in Eagle Eye portrays exactly what most of us would like to think we would be capable of in the same shoes, making the viewer all the most interested in - and involved with - what happens to him. Opposite him we have the lovely Michelle Monaghan, a very natural, and naturally beautiful actress who has shown her mettle in Kiss Kiss, Bang Bang, proved she can stand tall opposite big names in Mission Impossible 3 and shown that she can do heavyweight drama in Gone Baby Gone. A superior (relatively new) actress, she too is perfectly convincing as another unwitting pawn at the centre of this thriller.

The rest of the cast is also populated with various familiar faces, who all bring some (albeit limited) depth to the proceedings and make it yet more engaging. Billy Bob Thornton (looking pretty haggard) gets all the best lines as the FBI Agent on the case, who knows things aren't as simple as they seem, The Shield's Michael Chiklis gets a limited cameo as the Defence Secretary and we even get Rosario Dawson (tremendous in the recent Seven Pounds) as the Military contact sent to investigate the case. None of them have any meat to really get their acting chops into, but they all do well to bring these characters to life and make things more entertaining.

Directed aptly by relative newcomer D.J. Caruso, what you can really see on offer here is the Executive Producer stamp of Steven Spielberg himself, with plenty of huge explosions and futuristic set-pieces as cars get tossed across the screen by mechanical hands and trucks jack-knife out of control. The set-pieces increasingly grand, decent real car crashes soon give way to even bigger special effects and the stylish, explosively visceral appeal certainly helps this thriller provide good entertainment value-for-money. You will not be bored. Eagle Eye is a cleverly-constructed, well-delivered modern thriller, mildly intelligent and extremely entertaining, starring the young and upcoming Shia LaBeouf and a supporting cast of solid actors. Even if it does not rank amongst the best of the best, it remains a solid entry, and for all generations, and a multitude of tastes, it is decent and accessible, and comes recommended.