Dunkirk brings the horror and intensity home in stunning 4K. 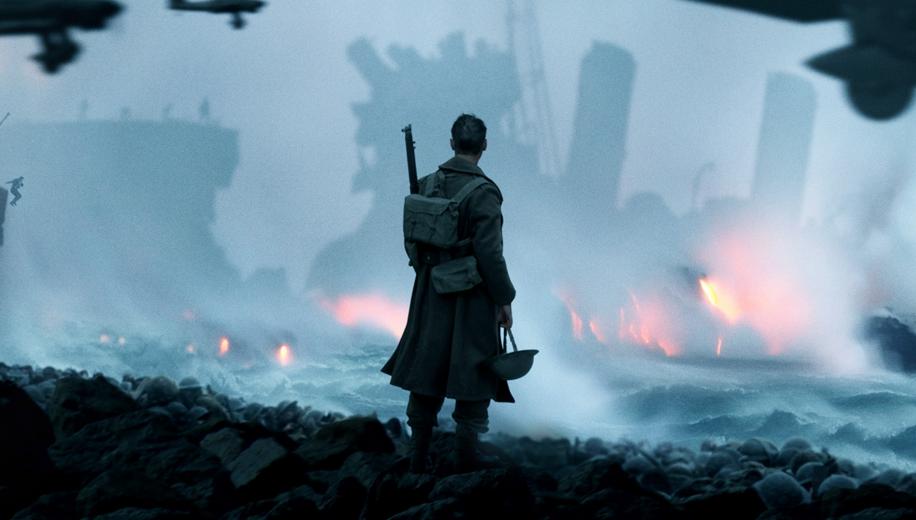 Nolan spins the monumental defeat of the Allied forces who fled the beaches of Dunkirk into a heroic tale of desperate survival in the face of unstoppable foes. Taking his masterful command of time (Memento, Inception and Interstellar), Nolan fashions an unusual non-linear look at the struggle to escape Dunkirk, taking several interconnecting stories - on land, at sea, and in the air - and blending them into one incessantly tense, punishingly harrowing tale. Few filmmakers have such a great handle on big screen blockbusters with substance, and Nolan brings all his ample skill to bear here, delivering in narrative, action, visuals and thunderous score.
The largely unknown cast are also well-chosen for their roles, bringing life to the sheer scale of the evacuation, with exquisitely shot action, from the opening scene - something straight out of a horror - to the bombing run on the beach, to the myriad sinking vessels and spectacular aerial combat. And whilst Nolan's obsession with time doesn't elicit seamless results it certainly adds an extra layer to the piece. A tense, efficient runtime allows the ticking clock score to hound you from start to finish, with few moments to breathe as you're thrown from one desperate escape scenario to the next with little reprieve. It's impressive, oppressive and unmissable.

Shot on film in both Panavision 65 and IMAX 65, the presentation adopts the shifting aspect ratio formula for the two formats, with a 1.78:1 used for the IMAX scenes, whilst a broader ratio of 2.20:1 is employed for the rest, not wholly unlike the style adopted for Nolan's Dark Knight films. As with the rest of the titles in the recently released Nolan Ultra HD Blu-ray selection, Dunkirk has reportedly been released under the supervision of the director himself, approving the 4K scan and colour timing. Whilst the results are not universally astounding across all seven films, Dunkirk is easily a highlight and potentially a new benchmark for the format, with the native 4K rendition absolutely stunning.


Potentially a new benchmark for the format

Detail is frequently astounding, even on the wider shots, with skin textures keenly observed and background nuances brought to the fore. This is taken to another level for the full IMAX shots, which are sheer perfection. From the aerial sequences to the bombing runs across the crowded beach, to the claustrophobic ship interiors, Dunkirk is easily the best looking title of the recent Nolan 4K releases, and likely one of the best looking films you'll ever come across on the format.

HDR is used subtly but effectively to give breadth and depth to the piece, exploring untapped depths of shadow, expanding the visual horizons of the film but not in a way that leaves it looking unnaturally tweaked, instead merely stepping up from the already impressive Blu-ray presentation and delivering solid blacks, higher peaks and more degrees of nuance between. Similarly the WCG implementation is expert here; it's a harsh period film as it is, cold and brutal in its tone, with nothing particularly vivid or even vibrant; skin tones are suitably bloodless too, in the cold conditions, weathered and worn by the horrors. Still the WCG finds its place amidst the chaos, bringing depth to the tones and a richness that the Blu-ray can't quite embrace. It's a superior rendition of the film, and not just the best entry in the Nolan collection but also one of the best Ultra HD Blu-ray titles available on the format.

Whilst many are crying out for a Dolby Atmos track, Dunkirk - as with almost all of the titles available in the Nolan collection - shows just what can still be done by a top notch DTS-HD Master Audio 5.1 track, delivering the perfectly engineered soundtrack with precision and consummate power. It's intense and oppressive, drawing you into the maelstrom for a chaotic, claustrophobic ride.


The best soundtrack of any of Nolan's films

From the ticking clock horror movie style opening sequence onwards the film's score grabs hold of you and never lets up, blowing your eardrums during the first raid, making you feel the bolts rattle in the desperately noisy Spitfires, with their thunderous guns pounding shells across your living room. The LFE input is incessant, raising your heartbeat and doing its level best to put you in the thick of the horror of war. Dialogue is the least important element, but is still delivered with clarity, but it's the perfect blend of effects and score - at times one and the same - that bring this film to life, and bring the soundstage to life, delivering one of the better tracks of the year and the best track of this Nolan selection.

Whilst the Ultra HD Blu-ray disc itself has no extras to call its own, neither does the accompanying Blu-ray disc, with all of the film's supplemental features placed on a dedicated second Blu-ray disc, reportedly to afford more room for the film to shine on the Blu-ray (it's questionable whether the same logic can be applied to the Ultra HD disc itself). Even without a commentary, the package is impressive.


The extras package is impressive.

Split into five key sections, each with their own sub-section, the extras package is entirely Featurette-driven, with Creation, Land, Air, Sea and Conclusion giving the broad overview as to what the individual sections detail, and no specific section dedicated to more traditional elements like the Cast and Characters, arguably because they were the least important elements. Creation looks at the set-up and the historical setting, whilst the Land section spends time investigating how they staged the hundreds of thousands of bodies on the beach, and recreated the Mole. We get a look at bringing the classic aircraft back to life, and what it took to make them 'fly' once again, whilst the Sea section looks both at the rescuing armada of sailing boats and the larger vessels - as well as staging what happened to them. There's a small Coast Guard Promo to round off the extra features and its a hearty package, with Play All options throughout and a total runtime rivaling that of the main film itself.

Having worked on it off and on for over a quarter of a century, Dunkirk is clearly a passion project for master filmmaker Christopher Nolan and whilst this may not be his most spectacular work - it's going to take a hell of a lot to reach the dizzy heights of The Dark Knight, or display the kind of ambition Inception, and even Interstellar, offered - it is undeniably accomplished.

Out of all the Nolan films released this Christmas, Dunkirk - whilst in some eyes one of the weaker entries (despite that still making it something of a masterpiece in comparison to most other films out there) - is the strongest entry technically, delivering some of the best video and audio that the Ultra HD affords, particularly with its native 4K DI based on 65mm and IMAX footage. Even if you didn't buy the entire collection as a package, don't miss out on adding this to your basket.