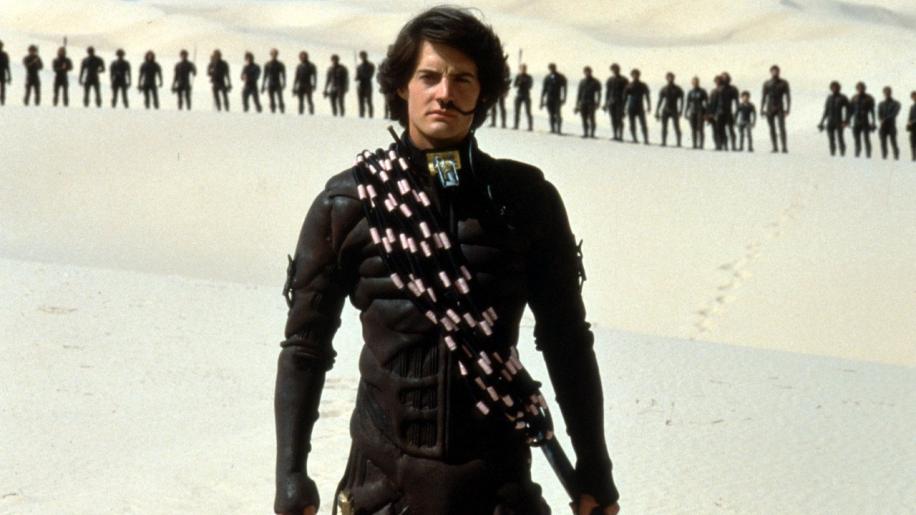 As I sat down to watch Dune, I found it quite unfathomable as to why I had never seen it before. I began to question my science fiction roots; how could I call myself a genre fan if I had never seen Lynch's oeuvre. I then had to think back to the reason why I had never seen it. Eventually I came up with the answer, it was Spitting Image. A satiristic puppet show made around the same time that Lynch's film was screening. As well as producing a TV show there was at least one book, I owned said book and in it there was a very small section, not more than three or four lines, lampooning the Sandworm effects of Dune. There was my reason, nothing to do with the critical backlash upon its release, nor the fact that it bombed, no, those few lines tainted my view and before I knew it twenty two years have passed and here I am seeing Dune for the first time.

The literary source for Dune was fist published in 1965, it was a combination of two three part stories by author Frank Herbert. Upon its release a vast spiralling world filled with characters, events and situations with a hither to unseen depth in science fiction, prompting some to compare it against the mighty Lord of the Rings of the fantasy genre, was devoured by both sci fi fans and readers of 'serious' fiction alike. Later that same year it won both a Hugo and a Nebula award for Best Science Fiction Novel of the year. Building on this success Herbert penned a further six books before his death in 1986. Such was the intricate nature and in depth story telling it was generally felt, like Lord of the Rings, that Dune was un-filmable. Indeed many attempts were made to bring it to the big screen, but all seemed to stumble and fall, with the script becoming the main problem. But it took the combined talents of Italian borne mega-producer Dino De Laurentis and visionary director David Lynch to make it actually happen.

Lynch's adaptation remains quite faithful to its source material; The year is 10191, the most precious material in the universe is the Spice Melange, a narcotic that can prolong life and grant second sight. Melange is only found on one world, Arrakis, also known as Dune, whereupon Houses are periodically put in place by the Padishah Emperor to mine and distribute the spice. Two houses are in dispute about Dune, House Atreides and House Herkonnen. House Atreides is rightfully put in place by the Emperor, though he fears their growing power and finances House Herkonnen and its despicable Baron to attack and take over Dune, killing all. However, political intrigue ensures that Duke Leto Atreites wife, Jessica, and son, Paul, are spared and escape to take refuge with the Fremen, the natural inhabitants of Dune. The Fremen come to regard Paul as their Messiah, already an accomplished warrior, the spice has given him extra ordinary powers, and one by one he fulfils the prophecies laid down centuries ago and changes the face of Dune forever.

These scant few lines do nothing to encompass the full richness that is Dune, being as they only point out the major plot points. Lynch's film is multi layered, each one interconnected to the whole, giving rise to the deep world that Herbert himself envisaged. Take for example Dr. Wellington Yueh's small part; he is branded with the trusted symbol of the Atreides House, but he has had his conditioning broken and betrays his house, yet in doing so sets up his own agenda becoming a pivotal character in the film. Such depth and characterisation are conveyed in less than ten minutes of screen time, such is the complexity of the writing, such is the skill of Lynch, such is the power of the film. Where each character can have a defining moment, nothing is left open and all have their chance to shine.

Visually Dune is quite outstanding having detail within detail; the production is more akin to historical epic than science fiction. With a budget of $45 million it is all up there on the screen. Lynch creates immersive, believable worlds with striking imagery that linger in the mind, bathing his worlds in light and fantastic. Add to this a deep and meaningful score produced by Toto with overtones of Vangelis and Holst you have an emotional involvement far beyond the normal science fiction fodder. This is not a “Star Wars”; this is adult science fiction and meant to be enjoyed on that level. And enjoy it I did. It is a vast, rich world, which will have you marvelling at the spectacle, squirming at the horror, cheering with the hero and rooting for the victory. Indeed with each viewing new depth can be conceived, so rich and layered is the complex story.

With such a rich array of characters, a multi faceted story and out of this world sets, how then can this movie have flopped upon its initial release? The answer is perfectly simple I'm afraid. The film is not long enough. Try to imagine Peter Jackson's Lord of the Rings condensed into one film and you will get the idea. Lynch shot in excess of three (some say up to four) hours of footage. It was his intention to craft this into one three -ish hour film. Unfortunately the money men stepped in forcing a cut of around (a commercial) two hours. This has the dreadful effect of shortening a lot of exposition, leading many to regard the film as incomprehensible. This, thankfully, is simply not true, the film is very easy to follow, but it is extremely choppy. Many actions happen with little motive or explanation, a deal of suspension of disbelief is needed to get through unscathed. For example Paul and Chani's relationship blossoms all too rapidly from nothing. Secondly the films trailer hints at a film like Star Wars, but nothing could be further from the truth. Finally, the ever present expectation; with a reported twelve million readers, Dune had to lot to live up to. Inevitably some experienced disappointment. These factors combined to grind the box office takings to a stand still, and the planned Dune trilogy was scrapped. Looking at it today the film still holds up extremely well. The story line, look and depth of the film still have much to offer. The effects have, unfortunately, dated somewhat, and though never look artificial still tend to pull one away from the spectacle. As for the Sandworms, I thought they looked really quite good for a practical effect, seems to me Spitting Image had it wrong. One wonders what would have happened if Dune were to be remade today. I'm not talking about the TV mini series', rather a fully fledged epic, on the scale of Jackson's triumph. You know, even if such a project were to be green lit, I have no doubt all would pay homage to Lynch's opus. It is a grand film, in every sense, and one deserving of a place in history. I know it has that already, but for all the wrong reasons.

This DVD release is the Collectors edition, meaning that as well as the theatrical cut of the film there is also a three hour extended version as a second disc. This version was made for and is screened purely on television. To get to the 177 minute runtime, an additional prologue was added, removing Virginia Madsen and replacing her with what looks like concept art stills as a male narrator tries to tie together the plots of the film. Also added were unfinished and outtake material, and whilst it is true that some do add to the exposition of the film, smoothing some of the edits, all is unfinished, for example none of the Fremen have their blue eyes, the side effect of Melange. But worst of all, the entire thing is pan and scan, and looks utterly awful, with so much lost from the cinematography I am amazed anyone would ever watch it. In fact it is so far from what Lynch wanted to achieve not only did he remove his name from the director's credit, but he also took away his screenplay credit too. It is a travesty that it is this version that is more often than not to crop up on late night TV nowadays, and anyone that has only seen this version will no doubt have a very different opinion than my own on Dune.