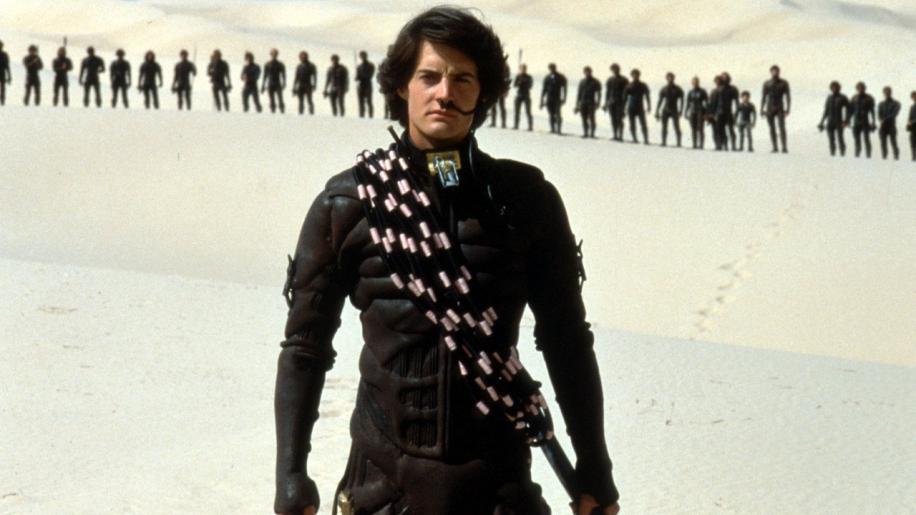 The theatrical cut is given a theatrically correct 2.35:1 aspect anamorphically enhanced for widescreen TV's picture with an average bitrate of 8.18 Mbps. Spice maybe able to prolong life, but it seems not to the film print. The film suffers from various spots of damage and grain associated with age. But that is where the bad ends, because digitally there is nothing to fault. Detail level ranges from excellent to very good, few places suffer any softening. Colour wise Lynch's palette is faithfully reproduced with bold striking contrast. There was no hint of bleed and where resoundingly thick, unfortunately though the colours did thin somewhat in places, though this had more to do with the special effects than any processing. Contrast and brightness are set to give full rich blacks that only grey, again, in some of the weaker effects. Digitally there were no compression artefacts or edge enhancement, not surprising with such a good bitrate. For an effects heavy film, over twenty years old now, despite is few faults, I regard this picture as nothing less than excellent.

The TV version is pan and scan at 4.3 aspect with an average bitrate of 5.70 Mbps. It is awful, washed out colours, a bland yellow tint, grey blacks with that awful smearing and gain associated with P&S. But is doesn't really matter because no one will want to watch this version anyway.

Three sound tracks to choose from for the theatrical cut, all English, a Dolby digital 5.1, a Dolby digital 2.0 surround and a DTS 5.1. The original blown up 70mm film print encoded a six track sound mix, meaning a true 5.1 sound mix can be produced, rather than the artificial single track pumped into all speakers. The Dolby 5.1 track must be the loudest Dolby track I've ever heard. Right from the off the all speakers are assaulted with an aggressive sound, mix score and special effects are given full reign. So much so that the poor old centre speaker, which contains all the dialogue, struggles to keep up at times, luckily, though, it is never actually drowned out. As a mix there is good separation, plenty of action though lacking in actual effects, it sounding rather thick than discreet, helped plenty by the resoundingly heavy bass. It is anything but subtle, not one to show off your system's nuances but one to keep the neighbours up. By contrast the DTS mix is extremely weak, one of the quietest I've heard, but also lacking in any decent bass. This has the effect of giving a thin sound that is considerably less inspiring. The Dolby surround mix is also a very good option, it containing the same rich bass as its 5.1 brother, again with plenty of rear action.

All the extras are housed on the third disc. First up there is Impressions of Dune, a newly made documentary that contains interviews with most of the major crew of the film as well as Kyle MacLachlan and a few fans and film critics. It has a 1.78:1 aspect anamorphically enhanced for widescreen TV's and runs for about forty minutes. There is plenty of information to be had here; all talk with fond memories of the production and of the cast and of Lynch. One thing I would have liked is a bit more depth into why Lynch allowed it to be cut to two hours, the 'Cut' section lasted a mere minute with no information as to why. Personally I think Lynch didn't have the 'clout' to stand firm on his intentions, ironically he know has such 'clout' but has never made a major picture since, stating he never wants to loose artistic control again. The run time is padded with some film clips (all shown in correct ratio) but there is little in the way of behind the scenes stuff, a few photographs make up the majority of the content. However, I did find this a fascinating glimpse into the world of Dune.

Next up is a six minute promotional film entitled Destination Dune and was filmed behind the scenes on the sets of Dune. What comes across is the scale to which the film was made, massive sets, a hugely experienced team of experts and willingness to success. It ends with a glowing endorsement from Herbert himself.

Next up there is an Interview with Frank Herbert, actually not so much an interview, more a few sentences. Filmed on what looks like a breakfast TV show Herbert has little chance to say anything in the minute run time of this piece, though he mentions Dune, hence its inclusion.

Next up is the Theatrical trailer, makes the film look like something it isn't, a shame.

Finally there is the cast and crew biographies, this is rubbish, a one sentence biography, i.e. name age and where born, before listing their films.

Also included is a thirty two page, full colour booklet that explains much of the Dune history and goes into great detail about the production of the film.

Dune is a film that appears to splinter fans. There are the Dune book fans that either love or hate it. There are Lynch fans that either love or hate it. Personally I think the film has much to offer. It is an immensely rich world with each subsequent viewing offering the chance to see further into it. I found it compelling and spectacular, if a little choppy, however, no matter what I say fans will buy, critics won't. As a DVD set this edition pretty good, the chance to own both versions and a decent if slightly lacking in number, array of extras in a nice metallic tin, contain probably the best picture and sound that Dune will ever have.