I must not fear. Fear is the mind-killer... 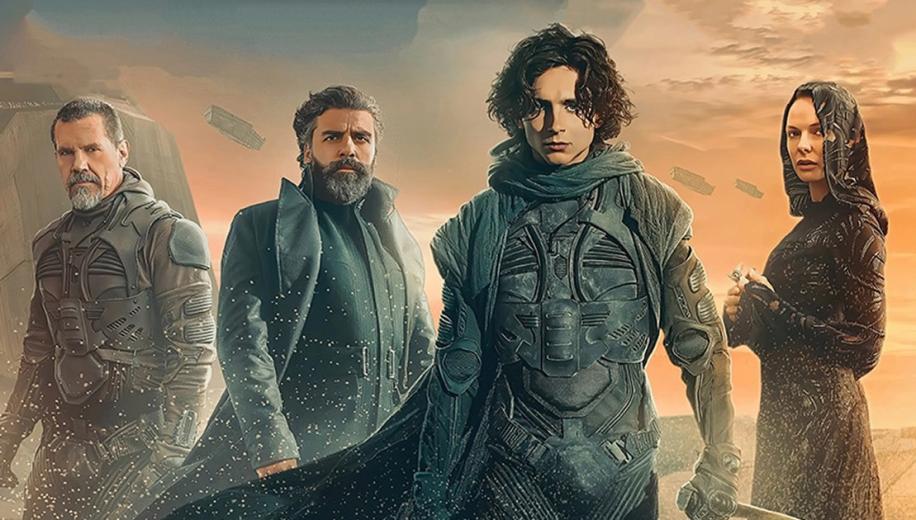 Light, sound and scale. The three tent poles of filmmaking in the world of director Denis Villeneuve. Particularly since his stunningly beautiful update of Blade Runner and the cerebral, celebration of linguistics, Arrival, he's become known as a director who doesn’t take the spectacle of cinema lightly. Continuing that large scale science fiction bent, Dune: Part One has spectacle in spades, but it also has more in common with the biblical epics of the 1950s and 60s than it does with any modern work of cinematic SF.

Paul Atreides is the son of Duke Leto of Caladan, a popular figure in an expansive empire reaching across the universe. But his family have been called upon by the emperor to leave their homeworld in order to replace their bitter rivals, the brutal Harkonnen, as the House in charge of the planet Arrakis. Also known as Dune, it is the only place in the universe where can be found the vital ingredient for interstellar space travel, Spice. Paul must follow his father to Arrakis, but will it lead to glory or defeat for House Atreides? Only one thing is sure: the spice must flow.

Dune is close to the film equivalent of a tone poem; an avant garde blockbuster richly layered with motifs and associations, the sensory experience here is everything. It’s one of the most unusual big budget cinema experiences to be had this year, with its languid pacing and beautiful patience with its own story. The spectacle of each scene is where the true focus is, the achievement in translating not just a world, but a complex interconnected political system across a universe to film paralleled only by Peter Jackson’s Lord of the Rings trilogy. Like that behemoth of cinema, attention to detail in the costuming, set dressing and particularly in the design of the key locations is both astonishing and absorbing.

But unlike Jackson's films, here that totally absorbing attention to detail lies in fun juxtaposition with the storytelling of the film. Obscuration is very much on the agenda, the unknowability of future, seemingly at odds with Paul’s shifting visions of Arrakis, and the clouded motivations of those in the present. Wherever the film takes us, rarely does director Denis Villeneuve allow the audience clarity, whether clouded by water mist, fog, pollutions or sandstorms; occasionally calm, frequently chaotic. There are scant few locations where the action, and therefore the motives of the characters, are ever fully revealed.

Not only does this give the opportunity for some stunning work with focus and colour, especially in the early scenes on Caladan and Geidi Prime, but it develops a sensation of getting lost in the film, lost as Paul is lost for the majority of the picture. Even lighting is used to obscure rather than illuminate scenes and characters and the few times where people’s motivations are clear and speaking becomes plain, the light is noticeable only by its absence.

Light and dark features strongly within each of the characters too. The Duke (played with benevolent authority by Oscar Isaac) seeks to free Arrakis from oppression, but seeks to rival the current emperor for power; his concubine and Paul’s mother Jessica (Rebecca Ferguson thankfully finding her understated side) is a loving partner and mother, but also bends to the mysterious Bene Geserit sisterhood and seeks to manipulate events to her own ends. The only truly open characters are Atreides sword-master Duncan Idaho and ruthless Harkonnen administrator Raban (Jason Momoa and Dave Bautista pulling their weight in as much as that’s necessary for their characters.) Consequently they end up being the least interesting.

...will stick with you long after you leave the cinema.

As with his previous films, Villeneuve is fascinated by scale here, boldly holding onto shots which demonstrate the vastness of the future-machines sitting in a landscape of even greater vastness. Scales within scales, just as the wheels within wheels of the political machinations, are gradually revealed replacing wonder with genuine awe. Complimenting this obsession with pure grandiosity is the truly bone-shaking sound design along with the epic score in true Hans Zimmer bass notes.

Villeneuve demonstrates absolutely no compunctions when it comes to jettisoning the three-, five- or even seven-act structure. The movie is unabashedly free flowing, not quite slavishly devoted to the structure of the book but devoted to creating the experience of a sprawling cinematic epic, having more in common with work like The Ten Commandments than with any typical science fiction blockbuster. At the final scene, it would be equally acceptable to see the word “intermission” as to see the end credits roll.

But this lack of interest in typical filmic structure is also easily the movie’s greatest weakness. Though it’s easy to get lost in its labyrinthine plot revealed so gradually by its unhurried scenes, taken as a whole the film doesn’t fully pull away from those blockbuster beats. Though the film is littered with the usual emotional tags, heartstring tugs and climactic events, they don’t come at the expected moments. Undoubtedly again we’re seeing an adherence to the structure of the book, but books very decidedly don’t work in the same way as films. Let’s not be boring and delve into tired ‘hero’s journey’ criticisms, after all it doesn’t have to seem out of place to have your decisive challenge at a mid-point in a movie but there is no escaping an audience expectation of some kind of final act of momentous challenge or victory for the characters. Dune absolutely does not meet this expectation, nor does it care to, creating a very definite sense of anti-climax where they should either be triumph or torment.

What you’ll get from the film will depend on your patience with it and how easily you can accept its position as first act and, with the future of the sequels still unsecured, whether you are happy for an intermission that may never cease. Either way, it’s a movie that is pure cinema, pure IMAX. For those who are looking for a more traditional science fiction actioner with plenty of forward momentum, Dune may end up being rather more of a hard sell. But for those who have no difficulty simply relaxing into a movie, letting it wash over as a sensory experience, there’s great reward here and a film that will stick with you long after you leave the cinema.

Dune is out in cinemas from 22nd October 2021. Transport yourself to Arrakis and experience it with unmatched crispness and clarity in IMAX, the way director Denis Villeneuve intended, with over an hour of expanded picture and the next generation of IMAX precision sound.