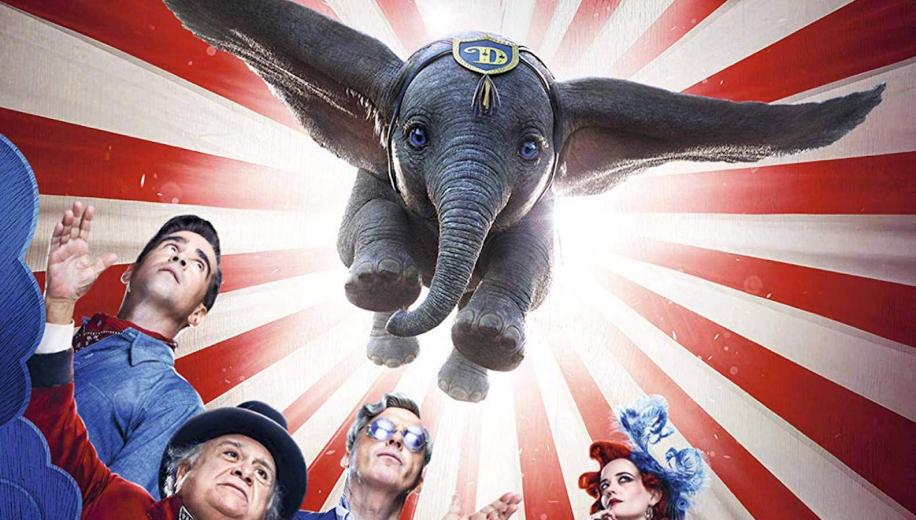 The latest Disney classic to get the remake treatment, Dumbo goes a slightly different route, with Tim Burton putting a darker spin on the traditional tale.

It's hard to imagine Disney ever stopping with their multi-channel course of action, churning out MCU features, Star Wars films, Pixar animated fare, classic Disney animated fare and now everything that Fox had on the roster. The decision to remake all of their classic Golden Age animations has been met with a modicum of criticism, however, with plenty cursed by a strict adherence to the original story, affording not a great deal new beyond the live action appeal. Still, the Box Office speaks volumes, and gives them carte blanche to continue down this road, with this year alone giving birth to live action remakes of both The Lion King and Aladdin. And, before those, Dumbo.

The original 1941 Dumbo animation was a much-needed whimsical diversion at a time when the Western world was more than a little preoccupied with the horrors of war, but its tale didn't actually involve a great deal of flying elephant action - the climax affording this little revelation as a wonderfully cathartic twist which gave the outcast baby elephant literal wings.

2019's Dumbo is not quite like the other Disney live action adaptations of late, pretty swiftly veering away from the original material, digging deeper with better-painted characters, no talking animals, and a considerably more expansive story that is almost part-Dumbo and part-Kong. More than anything, however, Dumbo is less a Disney movie and more a Tim Burton movie, laced with darker edges which do their best to skirt the limitations of the PG Disney rating.


Burton weaves a surprisingly well considered tale, which may have its flaws but which also gets a lot of mileage out of a superb Burton-regulars cast

The story has two circus children reunited with their soldier father (Colin Farrell), having lost their mother to influenza. Unfortunately, their father has lost an arm in the war, leaving Danny DeVito's circus manager compelled to give him the job nobody wants - taking care of the elephants. When the latest addition births a baby boy elephant with ears that everybody mocks him for, things get out of hand quickly, but when the crowds discover those ears come with unexpected benefits, the almost-broke show is suddenly a nationwide phenomenon, attracting a showbiz mogul (Michael Keaton) who clearly has his eyes on but one prize.

Burton weaves a surprisingly well considered tale, which may have its flaws - the tone is sometimes a little too dark for kids, and not quite dark enough for adults - but which also gets a lot of mileage out of a superb Burton-regulars cast, including DeVito (on fabulously energetic form, reminding you of a lighter side to his Penguin performance in Batman Returns, despite the fact that that was over a quarter of a century ago), Eva Green (whose recent career highlights appear to be Burton driven, between this, Miss Peregrine and, to a lesser extent, Dark Shadows), and Burton's Batman himself, Michael Keaton (who is definitely on the comeback trail, after yearly gems with Birdman, Spotlight, The Founder and then Spider-Man: Homecoming). Farrell himself does a solid job, whilst the young actors who play his children are typically - and engagingly - eccentric in that quintessential Burton style. Indeed, the whole thing is imbued with the director's tropes, making for a nice addition to his recently-flagging resume, not quite as enjoyable as Miss Peregrine, but far from bad. Dumbo comes to UK Ultra HD Blu-ray courtesy of Disney, marrying up to their likely identical US release from back in June, affording a frequently classically beautiful image which does its best despite the restrictions of a 2K Digital Intermediate.

The disc presents an upscaled 3840 x 2160p resolution image utilising the film's original theatrical aspect ratio of widescreen 1.85:1. It uses 10-bit video depth, a Wide Colour Gamut (WCG) and High Dynamic Range (HDR), and is encoded using the HEVC (H.265) codec, although once again Disney frustratingly eschews the use of both Dolby Vision and HDR10+.

Set a century ago, Burton does a tremendous job imbuing the feature with a classical period style, but not resorting to more familiar tropes of sepia tones and bleached palettes. Right from the opening train journey, culminating in a stunning sunset brimming with pinks, oranges and blues, it's easy to see the visual prowess of the director in action, and the 4K presentation draws as much fine texturing out of the image as the upscale allows for, bringing crowded sequences to life with intricate nuance, whilst juxtaposing the early dilapidated circus scenes with the latter grand shows.

Dumbo-vision is an interesting effect, used well enough, and the image pops with some strikingly rich tones which benefit from adept HDR and WCG implementation - the psychedelic pink elephants sequence stands out with its near-neon glow - and these elements also help do justice to Burton's excellent command of shadow, helping draw added detail out of the depths to further distinguish this 4K presentation from its 1080p Blu-ray counterpart. The aural accompaniment is High Definition 3D immersive audio of the Dolby Atmos variety, offering some manner of discrete separation, and occasional LFE heft, as Danny Elfman's rousing but still darkness-infused score champions the myriad tones of the story. It's not the demo offering that fans would have expected from this big budget Disney remake, but it is a fairly familiar story from the House of Atmouse, despite the fact that a few recent offerings suggested they had learned their lesson.


A little more punch, and a properly mastered volume level would have made all the difference here, turning a good track into a great one no doubt

Turning the volume up somewhat helps to a certain extent, but doesn't make up for a moderate lack of immersion, nor compensate for the limited LFE oomph that some of the setpieces really demand. When elephant stomps shake the entire Big Top, you halfway expect them to do the same thing in your living room, but Dumbo seldom achieves anywhere near that degree of impact.

Nonetheless, dialogue remains well-prioritised, as do some of the effects - mostly revolving around the Dumbo flight sequences - crowded sequences are somewhat engulfing, and Elfman's score gets the best treatment of all of the aural elements. A little more punch and a properly mastered volume level would have made all the difference here, turning a good track into a great one no doubt. A series of short Featurettes largely comprise the limited extras, with none ported over onto the 4K Ultra HD disc itself, and the accompanying Blu-ray hardly bursting with its offering of a look behind the animation of Dumbo, the circus acts, the costumes, and the nods to the original Disney classic, as well as a few Deleted Scenes, a Gag Reel and a Music Video. A nice addition to Burton's recently-flagging resume, not quite as enjoyable as Miss Peregrine, but far from bad

Dumbo hardly justifies this incessant mining of their classic animated back-catalogue to find fodder for the remake juggernaut, but it's thankfully more Burton than Disney, expanding into something more than just a beat-for-beat reworking.

The UK 4K Ultra HD Blu-ray release affords us very good video, but disappoints somewhat in the audio department, with Dumbo's Atmos track something of a step backwards in terms of Disney's recent track record. A few extras on the accompanying Blu-ray disc prevent this being completely bare bones, rounding out a solid enough offering.

What's new on Sky, NOW and Paramount+ UK for December 2022