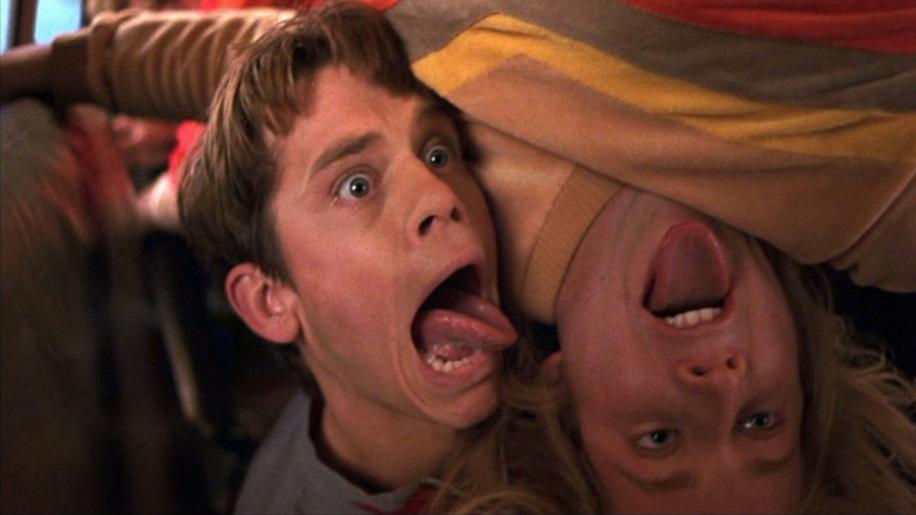 Dumb and Dumberer is presented as the prequel to the 1994 hit Dumb and Dumber which launched the movie making careers of the Farrelly Brothers, who prior to directing this box office hit were writers for “Seinfeld”. It also confirmed Jim Carrey was no one hit wonder following his earlier outing in 1994 with The Mask and Ace Ventura Pet Detective. You can see then why New Line would want to revisit the loveable but idiotic friends Harry Dunne and Lloyd Christmas. This tale tells Harry and Lloyds back-story from birth (over the opening credits) to High School where they first meet. The school's corrupt Principal (Eugene Levy) and head lunch lady (Cheri Oteri) hatch a plan to swindle the school out of a $100,000 grant by setting up a fake class for “special needs” children. But who is dumb enough to put in the class to convince the school's benefactor to hand over the cheque. In steps Harry (Derek Richardson) and Lloyd (Eric Christian Olsen) to more than adequately fill those shoes.

If the plotline sounds feeble that's because it is. The story is merely a device to throw these two characters together again and laugh....? at their stupidity, pratfalls, and toilet humour. Unfortunately the humour is very thin, and once again the utterly hilarious Eugene Levy provides most of the laugh out loud moments. Of particular note is the moment when he kidnaps the school reporter who warns him her parents will be suspicious. “One call from the school principal should calm their fears my dear” says Levy. Cut to a payphone with Levy doing a side splitting impersonation of a teenage girl calling the reporters parents with a lame excuse of why she won't be home tonight. Classic Levy. The two young leads do a splendid job of capturing the essence of the memorable performances by Jim Carrey and Jeff Daniels without making the mistake of falling into bad mimicry, and director Troy Miller keeps the gags coming and the pace quick enough that the comic misses don't linger and the hits are soon forgotten. I found this movie diverting for it's short running time, and not as bad as reviews on its cinema release would have you believe. However don't expect the comedy classic that the original became. There is little in here that you will recall 10 minutes after you press eject on your DVD.