The king returns in 'spectacular' fashion 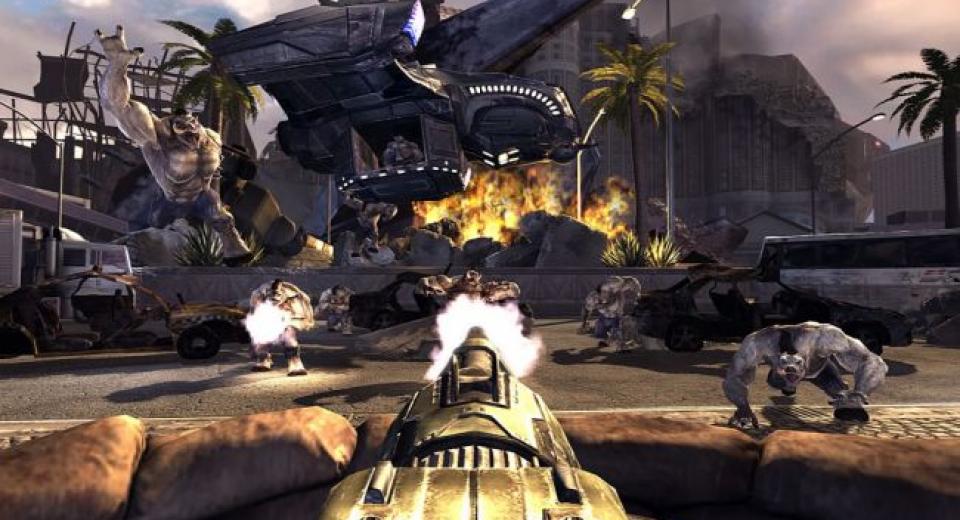 “After twelve f******g years it should be [good].” Yes Duke, a game in development for that long should be good and the developers should be grateful to those loyal enough to follow it for so long. Reflected in its tag name, Duke Nukem: Forever has had a rough development time and been promised to be released on various formats. A problem with being in development for this long is that a game has to be redesigned for each platform that comes and goes in this time scale.

Publishing this ever-long title is 2K Games who released Borderlands in 2009 which was one of the most underappreciated games of its time. Finding a fine balance between Role Playing Game and First Person Shooter, it suited many gamers and won over their hearts so much so it achieved a Game of the Year award. Although being in a different genre, you’d have thought 2K would know a thing or two about producing enjoyable titles.

There’s no denying the fact that Duke Nukem is back, and he’s back with a vengeance. After initially shocking many with his outings on N64 and PS1 early doors, his shock factor still remains. Unquestionably so, the game is slapped with an 18 rating and should be locked away from any young audiences due to Duke’s humour. Which, you’ll have probably guessed, hasn’t changed one bit at all; boob jokes and innuendos are all the rage throughout. The only problem with all this is that it never ceases;, one liners are repeated throughout the game and become repetitive and annoying which just shows how much the gaming market has moved on. Yes some of it is laugh-out-loud funny, and the humour scattered around the environments is as good as ever, but does everything have to end in sexual innuendo? Anyone expecting a serious FPS that will challenge you in a Call of Duty manner will be disappointed. That is not to say that the game isn’t a challenge or that the shooting sections aren’t there, it’s just that this is more platform based as opposed to relying heavily on the shooting mechanic. Early on you won’t see much action at all, instead you explore the missions finding items, reaching certain destinations and later on you’ll race around in monster trucks and find your way through an electrified kitchen when on the receiving end of a shrink ray. These opening sections are good as they offer you plenty of chance to muck around and explore the world as opposed to setting you on a linear course, and it adds to the game’s overall appeal.

Although you will more than likely enjoy your time playing through certain levels, you can’t help but feel that this is a game that would have been so much better had it been released on the original Xbox or on PS2. Not only does the game follow a pattern of many predecessors, whereby the end of a level is signified by a huge boss, but the graphics also look like a previous generation title. In places the textures are slow to appear and much of the game plays catch up to your movements on screen. In tight scenarios where there are multiple enemies on screen at once, it slows down horribly and the frame rate is quite frankly appalling.

As ever, you play through a variety of locations with one intent; killing the alien scum that did a runner with Duke’s babes. Even a fictional American government can’t have that, so they deploy the creatively named Earth Defence Force to help you on your way. These AI, if you can even call them ‘intelligent’, suit the game in two ways; the first being to get pasted by the enemy and secondly to get in your way, on a lighter note they do drop ammo when dying so every cloud and all that. Although the levels are varied enough for them not to become boring, at some point or another in his lifetime, Duke has already visited them making you wonder if any creativity went into level design at all; Fast food joint, check. Wild West level, check. A strip club being slammed in for good measure, oh hell yes! There are some saving graces for Forever though, one being the interactivity of the world that you are shoved into. Much like before you can touch and feel many of the world’s features, like sticking your finger in a plug socket or picking up a log from the toilet shortly before throwing it at the nearest wall. It’s little distractions and joys like these that take you away from the horror of the main game and allow you some pleasure in a game that’s so intent on being fun, it does exactly the opposite. But come on, who can’t resist drawing a penis on the white board in the opening sequence?

As well as environmental distractions being in place here, there are also several mini games that you can participate in for the fun of it and hoover up the achievements that go along with doing so. There’s an air hockey table, which for some reason Duke cannot use to save his life, a pinball machine and a suitably designed whack-a-mole game too. If Gearbox had put as much effort into the game as they have in making all the mini games work and putting all the detail into the environment then they could have had a decent title on their hands.

The friendly AI doesn’t stand much chance against an enemy who are ferocious, not because of their intelligence, but simply by their number and how they will overwhelm you. Duke doesn’t fair too well against enemies either as only a couple of shots will make your screen flash red which means you’re close to death, which you will get used to. You’ll find yourself dying more times than you’ll care to recall and not only this, you’ll have to deal with the insufferable load times as a result. We’ve already waited twelve years for this, we don’t want to wait another twelve between each level.

All enemies, which become rather boring after the first couple of levels, follow the same set pattern of movements/attacks and they even get these wrong because the game is so glitchy. Don’t be at all surprised if you find a Pigcop stuck on the scenery floating in mid-air before resuming its attack pattern or if their limbs fly about sporadically upon death.

Returning from previous games is the set of weapons you get to mess around with, all the staple favourites return such as the pistol, shotgun, devastator, enforcer and the shrink ray. Sadly though, many of the guns go off with little ‘bang’ and the devastator proves to be far from devastating. For trained ears out there, don’t be at all surprised either if you recognise the noise omitted from the pistol and shotgun because you have heard them before in another shooter released by 2K, ahem *Borderlands* As you’d expect, there’s an air of arrogance about the entire game no matter where you look at it. From the ego bar which suits as your health (which can be boosted by playing mini games), to the, what we’ll call ‘charm’ he has with the barrage of females throughout. Although this is how Duke is and how all previous games were presented, it feels as if this is a release trying to fit into a market that has moved on.

Like many games out there at present, there’s a tacked on multiplayer side to Duke Nukem and it must be said that it isn’t great. There are multiple modes implemented which include your standard deathmatch and a capture the flag mode which has been suitably renamed to ‘capture the babe’. The latter has also been tweaked so that the babe doesn’t go quietly, giving the player the ability to spank her to come quietly along with you. Whilst all modes are straight forward and not complex by any stretch of the imagination, it’s unlikely that you’ll last long playing them. Firstly, many of the games are blighted by lag making them unplayable and secondly you’ll be hard pushed to find many other players out there who’ll commit to a full game. There’s a handful of levels for you to gad around in, comprising of new and remade environments from older titles, most notably the first level from Duke Nukem 64 which has been adapted. For many out there, this will serve as nothing more than a five minute experiment before quickly booting up another FPS in haste or even going to engage in a household chore. Seriously, painting the fence will provide more entertainment and longevity. For this reason there’s not much impetus for you to come back to the disc, ever, even if this was the only working game in your collection.

If you were twelve, then you’d love this game. It would be the best thing in your life right now but the likelihood is, that everyone who plays this game will be at an age where this kind of humour is no longer fun. For all those who sneak-played the old Dukes when they weren’t quite old enough then don’t think this will be the same because it won’t. You have moved on and matured, Duke Nukem: Forever has chosen to sit and dwell in its own aging humour and laughs at its own jokes. I just hope that in the future when people look back at the ever changing gaming world, they don’t pick this up and believe this is what we had to put up with and regarded as an excellent title. It is far from it. If your curiosity gets the better of you, it might just kill the cat for the good this time, only play if you want a boosted gamer score but even then beware. Your profile will be sullied with its presence forever more…..

Most definitely out of gum

Duke returns to our consoles after a fifteen year hiatus and boy is he starting to show his age. Refusing to grow old and relying heavily on old ground (same settings, same jokes and mostly the same weapons) this feels more like a hashed remaked of the original Nintendo 64 title. There are bound to be people out there who think this game is actually good but for the rest who are more grounded will realise what this game is; a shadow of its former self. It's hard to recommend even to the hardiest of Duke fans.