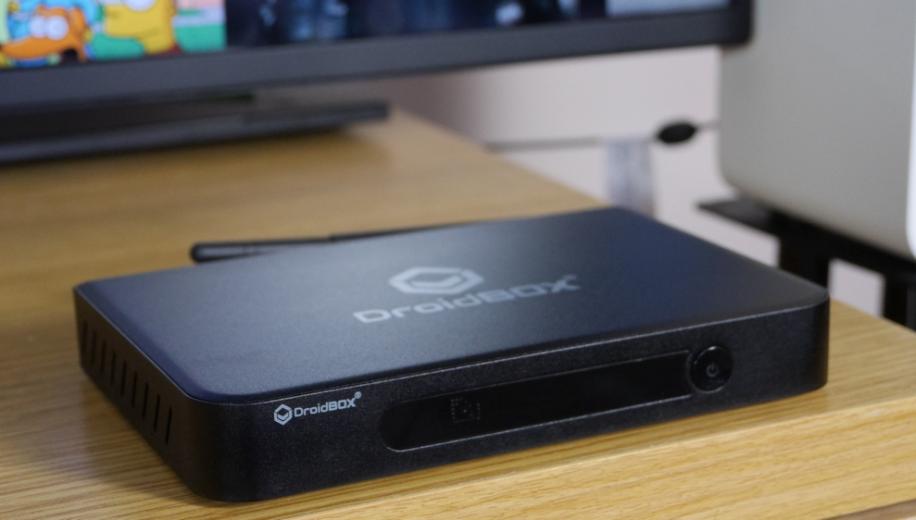 In a market flooded by devices bearing, on the face of it, very similar specifications, feature-sets and appearances, it’s difficult to make something that stands out from the crowd. There are dozens of these boxes, which are designed to make your TV either 'Smart' or at least smarter, available at all the usual online retailers, that could stand comparison to the T8-S but DroidBOX, like others before them, is seeking to add value with exclusive features, strong software support and a dedicated forum.

Probably the stand-out feature of the T8-S comes with its built-in ability to boot directly into the lightweight media centre operating system, OpenELEC, as well as it supporting Android; it’s not unique in that but there certainly aren’t many devices boasting this capability and we like the versatility it provides. The DroidBOX T8-S is widely available for £99.99 online (October 2015) which puts it up against some serious competition so its feature-set, as well as core performance, will need to be impressive – let’s find out if they are.

The DroidBOX T8-S comes equipped with an AMLogic S802 processor which, while getting slightly dated now, does provide box manufacturers with mature development tools. That is supported by an 8-core MALI 450 GPU and a pretty healthy 2GB of RAM. The T8-S comes running Android 4.4.2 and comes with 16GB of flash storage (12.1GB available after pre-installed apps) but this is expandable via SD Card, USB or you can even install a SATA HDD up to 2TB.

The DroidBOX T8-S sports an all-aluminium chassis in black with a display panel, showing the time, and a power button on the front. At the rear you'll find an HDMI 1.4 port, a Toslink digital audio out, a LAN port, a composite video connection (avoid), stereo outs and a power supply. These are joined by three USB 2.0 ports and a full-sized SD/MMC Card slot on the right hand side. The T8-S also supports Version 4.0 Bluetooth and dual band (2.4/5Ghz) 802.11n Wi-Fi. The supplied remote is good enough, with all the usual keys and support for a mouse-pointer function, but if you’re planning on making extensive use of a wide selection of Android apps, you’ll probably want to invest in a device with better touch-screen mimicking like an airmouse or wireless keyboard with a decent scroll/touch-pad.

As noted in the intro, DroidBOX has been proactive in providing users with some useful features unique(ish) to their devices. First of all there’s DroidBOX share which is an impressively thorough app, akin to some of those we see with Smart TVs from the major manufacturers. It provides a number of functions, including screen sharing and mirroring, app launching, settings, mouse pointer control and full remote replacement with assignable buttons. It is mostly excellent, aside for some screen tearing on the mirroring function being visible on your phone or tablet, and it’s more than compensation for the remote's poor pointer control. The T8-S also features AirPlay support, out-of-the-box, which could potentially save a few pounds on a paid-for app and it comes with its own app store installed. We think DroidBOX is onrocky ground here, however, with a few apps present that can clearly be used to directly access copyright content. You wouldn’t necessarily be breaking any laws in viewing anything but DroidBOX needs to be extremely careful in what tools it provides its UK based customers and we in no way condone these types of apps but it is difficult to know what comes pre-installed and what doesn't before a device arrives. DroidBOX has been specific in distancing themselves from these sorts of things but it appears they need to move things on further with the total removal of blatantly potential piracy apps coming pre-installed.

By 2015 standards, the DroidBOX T8-S is not that highly spec'd but it still registers an overall Antutu score of 32,845 which is on a par with the likes of the Minix X8-H Plus, at least on paper. The 3D graphics performance was better than expected, in particular, with the T8-S able to maintain 30 frames per second with the majority of games at 1080p. RAM speed and multitasking performance were also good, which tied in with our overall experiences of navigating menus and using apps.

In terms of video playback – using the Android OS players - this device isn’t as well equipped as some that are less powerful however. Using KODI, it will play the majority of files, but the AMLogic decoding baked into DBMC (Droidbox version of KODI and based on SPMC) doesn’t extend to automatic refresh rate switching, which is a definite miss. There are various video output choices under the DroidBOX Settings, including 1080p24 but it’s imperfect for the majority of content labelled as that because it plays back at exactly 24 frames per second, rather than the usual 23.976 that content is encoded in. Despite the advertised 3D support we couldn’t get any of our test ISO files to play and we similarly had no joy in passing HD Audio in anything other than down-mixed stereo. Playback of our test Ultra HD & 4K clips in .mp4 (H.264) was decent, at 24/30 frames per second, at lower bitrates but once we started pushing it up to over 60Mbps there was a lot of stuttering. The T8-S doesn’t have the hardware capability to decode HEVC (H.265) either so it will be of limited use as a 4K player going forwards in any case.

But, and perhaps that should have been in capitals, the T8-S is not restricted to being run on Android and has OpenELEC built-in, which means you can run it as a KODI-only device which removed some of the shortcomings with the Android versions we tried. Automatic refresh rate switching, in particular, works perfectly using AMLogic decoding and DroidBOX has already made several updates to their version which have improved overall stability. There is a bug with the correct time being maintained after reboot and initially we found entering pool.ntp.org as the Timeserver in the OpenELEC Network settings fixed the problem. However that didn't prove to be a long term fix and the only real way is to boot back into Android and back out again.

If you were reading this review in the hope it would be a suitable device for mainstream video apps like Netflix, Amazon Instant, BBC iPlayer, All 4 and YouTube, you’re in slightly the wrong category as the majority of Android boxes aren’t well suited to that. That’s all to do with Google Certification, which is showing some signs of being relaxed as more Android 5.x devices are being released but, for now, the majority of mainstream apps don’t play well. You can work-around iPlayer using KODI but none of the rest are really viable for us. With music apps, using the app to navigate, things are much better with the lossless version of TIDAL working very well. Spotify was also fully functional and we found the Bluetooth transmitter to be fairly strong and reliable at distances up to around 15 feet.

Strong manufacturer support and good performance means it's one you should be able to trust.

The DroidBOX T8-S is a well-made and reasonably powerful device with benchmark scores slightly better than the specs would suggest. It also comes with some nice, unique features that include a mobile app which, in terms of functionality, is a rival for those from the major TV manufacturers. There’s also a specially tailored version of KODI, although it’s not the best manufacturer implementation we’ve seen, but perhaps this DroidBox’s ‘killer app,’ comes with its ability to switch into OpenELEC with just a click of a button. Running this lightweight media centre operating system sees the T8-S step up a gear, in terms of video playback and responsiveness and DroidBOX seems very proactive in keeping it updated. All-in-all, in terms of performance, software support and reliability we find the DroidBOX does enough to justify a recommendation.

What else could I consider?

In this price category and class, it’s hard to look far beyond the likes of the Minix X8-H Plus, which brings with it HEVC Ultra HD decoding; or if 4K isn’t as important, have a look at the X8 Plus. Both have working versions of OpenELEC, too, although they, unlike the T8-S, aren’t manufacturer supported. The HiMedia Q5 is another great alternative and boats the most comprehensive support of local media files, with 7.1 HD audio and 3D ISO playback out-of-the-box, whilst if you just prefer the Windows experience, the Z64A or Tronsmart Ara X5 provide very decent alternatives.