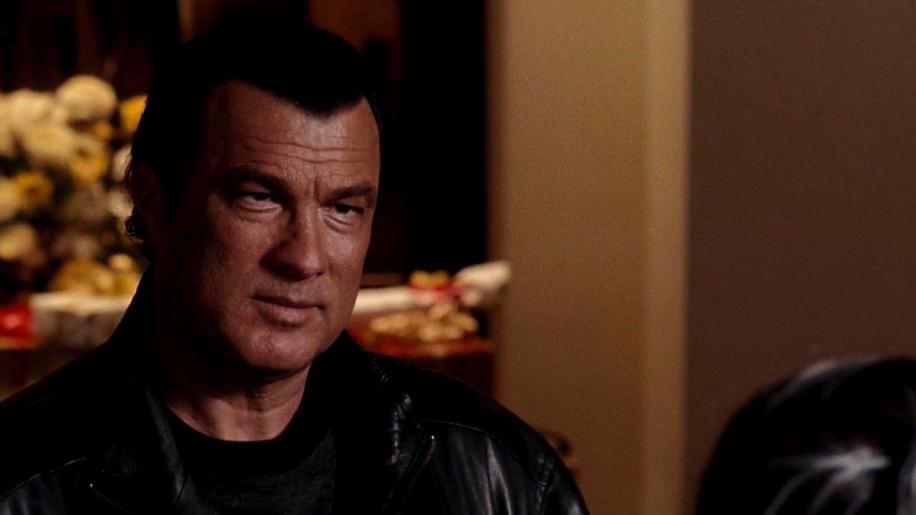 I have no idea why Stevel Seagal can't make a comeback. Van Damme has done JCVD and, more prominently, Stallone has done new Rocky and Rambo films. Even his new project, The Expendables, will probably do a good job of returning many classic 80s and 90s action heroes to the cinemas, from good old Dolph Ludgren to Jet Li (who never quite managed to successfully break into Hollywood) to this decade's comeback king, Mickey Rourke. But Seagal? He still resides happily in DTV hell, making poor, low budget action films that require minimal presence on set and minimum effort for the biggest paycheque. If he can get 2 Million Dollars for two weeks' work, and do that three times a year, well that's a pretty good annual salary for a guy languishing in the DTV dungeon. He's done 18 starring films since 2003, all straight to DVD, and has a few more in the pipeline, despite having just hit 58. Yet, with no comeback in sight, and no real sign of him changing his methods for filmmaking or choice of films (the classic action movie cash cow died out ages ago, at least theatrically), this guy just will not age with grace. And if even he wants to keep going on his action high, why turn down a chance to star with the resurgent Van Damme in his upcoming Weapon, and ride on the back of the success with JCVD? No, Seagal won't adapt (I always thought he might make a good samurai for a remake of the Japanese “Baby cart” series) and has yet to sign up for a movie that has even the slightest hope of making it into theatres. His latest release, however, is officially the first title to go simultaneously straight to Blu-ray. How will his new movies fare on the High Definition format then?

Ruslan Drachev is a crime novelist living out his retirement in sunny California. Called back to New York to attend his daughter's wedding, he is soon drawn back into his old Russian mafia way of life, and when his ex-wife and daughter are attacked just before the wedding, he is forced to beat, kick, stab, torture and shoot his way to the truth and get justice for his family.

Originally entitled Ruslan, I am not in the least bit surprised this became yet another Seagal film to get renamed with a generic three-word title, as is his trademark. It is also somewhat ironic, especially when you consider that the story for this movie - whilst initially as promising as the working title was original - soon degenerates into just typical, standard Seagal action-revenge plotting. Fans, I'm sure, will be happy that he is returning to what he does best, having dipped briefly into various weirdly-scripted, incoherently-plotted affairs as Submerged (mind-control, stolen submarines and Vinne Jones), Attack Force (b-movie rip-off of Firefox) and Black Dawn (Seagal's answer to the Bourne films). I suppose it made sense for Seagal to slowly drift back into classically revenge-orientated stories, especially since films like Liam Neeson's solid thriller Taken prove that simple revenge plots still work if done right, but I wouldn't have minded if he had succeeded in one of his more adventurous plots. If one of them had marked something of a comeback. He came so close with his return-to-Japan in Into the Sun, his competent Shadow Man and, most recently, Pistol Whipped, where he actually had a little more of a character. But after every step forward we just get another step back, and the debacle that was Kill Switch showed that Seagal was still a way off returning to the Big Screen.

Driven to Kill is actually directed by the flawed amateur who brought us Kill Switch, Jeff King, and has his terrible trademarks all across it (for example, unnecessary repeated cuts of the same shot from slightly different angles - in Kill Switch we saw a man's dive out of a window 12 times and here we get Seagal walking towards the camera about half a dozen times, as well as a lazy eye for the wide shot during fight scenes - which is Seagal's forte. His last watchable movie, Pistol Whipped, showcased some classic wide shots of the martial arts that this man can still pull off, but King has the camera right up in Seagal's face for the most part, and few of the frequent fight scenes look as good as they could have done. That said, this is a far superior animal to Kill Switch and, indeed, many of Seagal's other recent 'efforts', mainly thanks to the promising back-story of Ruslan's Russian Mafioso ties and the vaguely interesting plot to murder his family. It also boasts marginally better production values, a few vaguely arty shots (despite all King's flaws he still gets it right sometimes), plenty of action and killing and, perhaps most importantly, more Seagal.

Yes, I know that sounds like an odd thing to say about a Seagal movie but for his DTV released the man has become famous for having a stunt double, body double, hand double, and voice double. He was in about half of Submerged, 60% of Mercenary for Justice and about 15% of Against the Dark (although, strictly, that wasn't one of his starring vehicles - even though he was top-billed), so getting him to actually put in a full schedule of shooting appears to be something of a tough task. Driven to Kill is all about Seagal, and he even puts a little bit more into this performance. He appears to be fitting into slimmer-looking clothes, he is doing his own martial arts moves and even his own kicks, his body and stunt double are barely apparent (except perhaps in the shots from behind) and not only is he doing more of his voice work (although clearly still not all), he even puts on a somewhat patchy Russian accent for the entirety of the movie. And this isn't just a gimmick, I actually think the accent works once or twice, especially since Seagal's long-tired Southern drawl was getting annoying, and to have him shouting convincingly in a Russian accent is quite refreshing. Wow, we even get to see the big man running - full out running - in a foot-chase through an underground car park. They either made a massive treadmill that carried him across two parking lots or this man is finally getting in shape.

Fight-wise the movie clearly goes for quantity over quality, but this works out in the end as a few of the scenes have some nice, trademark Seagal blocks and throws in them. He appears to be a little sprightlier too, lumbering around like a boxer during the fights rather than just standing there like a tree and knocking people every which way. Wherever this guy goes - whether to see an old friend, talk to a pawn-shop owner or go to a strip-club, you can guarantee he's going to get into some kind of fight. And if it starts off with guns, everybody will conveniently run out of bullets so that he can engage them all in some rather brutal hand-to-hand combat. This is definitely the most action we've had from him in quite a while, and whilst I'm not sure it's the best character he has ever given us (if you really can call any of his roles characters), he has definitely made a concerted effort to give us more for our well-earned money.

In terms of overall entertainment, the shootouts range from competent to comedy (some of them go on for too long with nobody getting hit and almost drift into Naked Gun territory), the plot rolls along at a reasonably hectic pace (you can guarantee that, every ten minutes or so, somebody is going to get their face smashed in) and just about holds together as we head towards a fairly satisfying conclusion and the performances are certainly not cringe-worthy (although the only other vaguely familiar face is the head henchman from Indy 4, Igor Jijikine, who plays the main villain). It is unlikely to go any way towards convincing newcomers to like this Buddist fighting cupboard, but loyal fans will be pleased with the direction he is going in. Having followed the big man for the best part of 20 years, had the pleasure of positively reviewing everything from his classic Under Siege movies to the entertaining Under Siege rip-off that was Half Past Dead, and eagerly looking forward to the next offering from his strangely compelling relic of the dead action-hero era, the Man on Fire rip-off The Keeper (which will no doubt be re-titled something generic with 3 words like Prepared to Die - which would actually work ok for its bodyguard storyline) I am clearly one of those fans. I'm just not totally blind. Seagal has a long way to go before he makes theatrical return, and I wonder whether it is still within him to achieve such a comeback. Driven to Kill may be one of his best DTV releases, but it is no Taken and no JCVD. He needs to aim more in either one of those directions if he wants to get out of doing DTV movies alongside a tax-evading Wesley Snipes. Or just pull out all the stops for one last Under Siege instalment and hope for the best. In the meantime Driven to Kill barely scrapes a 6 in my Seagal-biased book, so those only familiar with his earlier decent work should probably not expect much at all. However, if you're a crazy-ass fan of his and are purely scoring this film against his other DTV releases then it probably deserves to be knocked up a couple of notches.