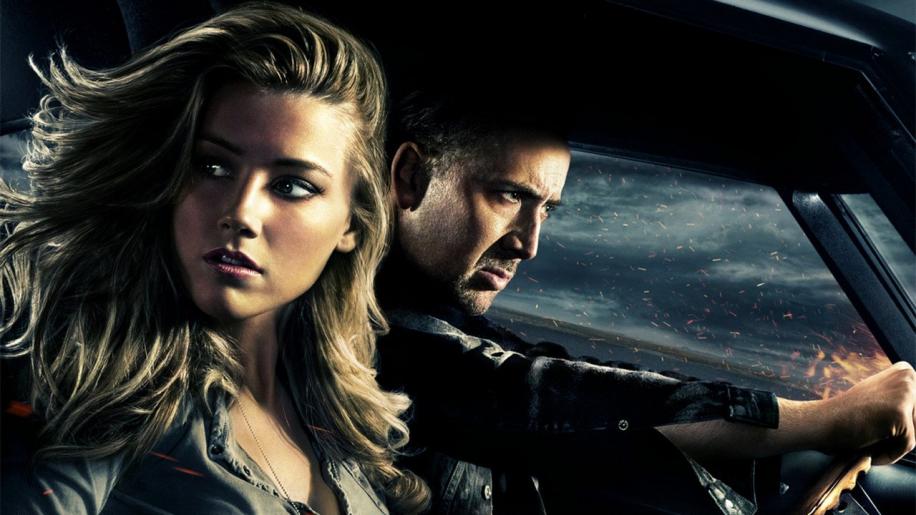 Nicolas Cage is one of those actors who always appears to be having a bad hair day. He has obviously always had problems with a noticeably receding hairline, and he just doesn’t know what to do about it. Does he go grunge – with really long extensions? Does he go for the comb-over – and end up looking twice his age? Or does he shave it really short like Bruce Willis? Personally, I think the Bruce Willis option is unequivocally the best route to go down, but, who knows, maybe the characters Cage plays just don’t suit that. Perhaps he just wants to look like he has more hair than he in fact does. All I know is that, at least recently, there definitely appears to be a parallel between the quality of his movies and the quality of his hair. And his hair has not been good.

Over the past decade, the man who gave us Leaving Las Vegas, Raising Arizona, Wild at Heart, The Rock and even Face/Off, has done almost twenty movies, only a few of which are actually any good. I enjoyed Matchstick Men, appreciated Adaptation, thought his reworking of Bad Lieutenant was suitably unusual, and thought his cameo in Kick-Ass was one of the two best elements in the movie (the other being Chloe Moretz’s Hit-Girl). But Ghost Rider? Bad hair. A couple of distinctly average National Treasure movies? Can you say “Pay-cheque”? Bangkok Dangerous? Give me a break! Next was too ridiculous, Knowing wasn’t much better and Season of the Witch just didn’t interest me. Universally terrible reviews and unquestionably awful hair – I don’t think I’m missing anything by skipping that one. Earlier this year we got Drive Angry, one of a whopping four titles that he is releasing this year – all of which (well, apart from the aforementioned Season of the Witch) I’m, rather surprisingly, actually quite interested in seeing.

Nicolas Cage plays John Milton, and John Milton is a very angry man. He kisses aggressively; he has angry sex where he grimly chomps on a fat cigar as a girl writhes and flails astride him like she was a body double for the pool sequence in Showgirls. Milton shoots angrily too, and he doesn’t much care who he shoots either. Oh, and he’s got angry hair, but who can tell whether or not it’s his own? Luckily he’s got just the right companion – a sexy but really quite angry girl, justifiably so as she is surrounded by nasty men (from her sexist, wandering-hands boss to her adulterous and physically abusive boyfriend). Unsurprisingly, she more than welcomes the chance to team up with Milton and help him do whatever he is going to do. Which reminds me, what is he going to do? Oh, well, he’s after the leader of a satanic cult who killed his daughter, took his granddaughter, and is planning on making a blood sacrifice out of her. I guess you can see why he might be angry. So angry, in fact, that he has broken out of hell just to get his revenge.

Drive Angry (oh, yeah I forgot to mention, he drives angrily too) is a massively over-the-top actioner which is based on a pretty flimsy concept – something of a cross between The Crow, Constantine, and Cage’s earlier, marginally better Ghost Rider – and which doesn’t even bother to develop the plot or characters at all, instead content to provide purely visceral action in order to keep you entertained. Oddly, from time to time, it actually succeeds, and yet you can’t help feel that the production was totally marketed wrong and shoved in the faces of an unsuspecting audience, who would understandably only assume that it had some worth to it. Actually, Drive Angry is quite an effective b-movie exploitation flick – the kind of thing you could imagine them making a fake trailer for and inserting it into the Rodriguez/Tarantino double-bill of Death Proof and Planet Terror, and that now they were making into a full-length production (à la Machete). If this was what viewers had expected – if this was what I had expected – I’m not sure I’d have been all that disappointed. Gun-toting central character out for revenge? Check. Evil gang who are holding someone he loves hostage? Check. Sexy kick-ass chica to follow him around in hot-pants? Check. Decapitation, blunt force trauma, machetes inserted into heads, body parts blown away by shotguns, girls randomly getting naked, cars randomly exploding, just about anything is up for slo-mo? Check on all counts. The trouble is that you do expect a little more than just these elements – after all, it looks like quite a big budget, glossy blockbuster.

Of course, on closer inspection, it is anything but. It might have a glossy style to it, but it’s grungy narrative, limited set-pieces, restricted locales and frankly awful effects (there’s a tanker carrying liquid hydrogen that looks like it’s still halfway through the VFX stages and somebody forgot to finish it off) tell you otherwise. In fact it was made for about $40 Million, and I bet a large chunk of that was spent filming it in 3D. And that doesn’t help either – this may well be noteworthy as one of the first R-rated actioners out on the new 3D format, but it is one of those films that is desperate to shove 3D in your face, with so many bullets spinning towards the screen, explosive debris hurtling towards your face and general reach-out-and-smack-you moments, that you sometimes wonder whether it’s nothing more than an extended trailer for 3D playback. And in 2D, what then is the point of its existence?

Nicolas Cage really deserves better, this surely can’t be more than another pay-day for him as it merely requires him to persistently scowl, squint, grimace and shoot people in increasingly ridiculous ways. On yeah, and he gets a moment ripped straight out of the reasonably enjoyable, similarly over-the-top Clive Owen actioner Shoot ‘Em Up, where he gets to shoot some people in slo-mo whilst having sex. But he takes this one far too seriously, never for once allowing us to laugh with him; never even bordering on tongue-in-cheek, and all we’re left with is unintentional humour – laughing at him and his ridiculously stoic macho posturing. I really didn’t care about his character, nor the quest he was on. Ok, so there were some brief and violent flashbacks to flesh out the background into the man who took his daughter’s life, and was prepping the grand-daughter for sacrifice; but it never felt substantial. You could have almost filled in the gaps yourself, the actual exposition moments dragging more than they should, and revealing nothing that you didn’t already know.

Funnily enough, most of the supporting characters are more interesting – from the sexy, bolshie partner-in-crime Piper (who, inexplicably, joins Cage’s gun-toting vigilante on what turns out to be a killing spree that involves taking down innocent cops too!) played by Amber Heard (The Informers, Zombieland); to the mysterious superhuman stranger, complete with a fake FBI badge, who is on their trail, played by William Fichtner. The overt villain of the piece, Billy Burke (he kind of looks like an evil MacGuyver, and was in the second season of 24, as well as the recent Twilight movies), plays his cult leader character with a painfully bad accent, in a bid to make him eccentrically different. Suffice to say it works, but not in a good way. Oh yeah, and David Morse (Long Kiss Goodnight) pops up for a pointless cameo as well. He’s the guy with the gammy leg, in case you miss him. But, all in all, they are colourful enough to work well as a plus point.

The action scenes really are nothing we haven’t seen before. People driving angrily; people driving angrily and shooting; jumping onto car bonnets; cars leaping through the air as fireballs erupt; and more driving angrily whilst shooting (also angrily). The aforementioned slo-mo shootout seems to be purely 3D orientated (either for the benefit of seeing the naked girls’ breasts bounce in 3D, or just to see bullets flying around your living room), the car-chases are lacklustre, and, quite honestly, the current obsession with making fairly flimsy stories about people driving around in classic American muscle cars acting tough is getting a bit repetitive (Fast & Furious, Fast Five, Faster). Worst of all, the final action sequence is utterly unimaginative, predictable to the extreme and downright tedious. Again, it reminds you that you are watching pure b-movie nonsense, an exploitation flick through and through that has no interest in providing something different, but just in providing the same things that (predominantly male) audiences have always loved – guns, car crashes and naked women – with such frequency that you don’t have the time to notice that there’s anything missing. Like a story. It does actually work, some of the time, but the rest of the time you’re either oversaturated by the vacuous aggressiveness of the scenes (the early confrontation with the people in the truck is set to the most painfully angry score) or just twiddling your fingers waiting for the lead characters to decide who they are next going to main and/or shoot.

I don’t know whether this worked at all as a crazy in-your-face 3D spectacle at the cinemas, but, from the Box Office returns, I would suspect not. An utter flop, the movie has failed to even make back its production costs, and you have to wonder whether it was a bit much of a gamble to try and pitch such a thin script to an already restricted audience (because of its rating) and hope that nobody noticed that all they were watching was smoke and mirrors. Critics reports and early word of mouth must have spread like wildfire, sealing the fate for this action vehicle, and it really is no wonder. If you’ve seen the trailer, then you’ve basically seen the whole movie – just extrapolate on it using your own imagination, maybe playing the trailer in slow-motion at the same time, and there you have the entire film. There really is no need to see the whole thing (Ok, well apart from the gratuitous sex and violence. Did I mention that?) unless you’re really curious about what Nic Cage is up to these days, and have a high tolerance for inane frivolity. And, you know what, some people do. I won’t begrudge them this addition to their collection, because I really wish that I could watch this film and say “That was enough. It may not have had all that much plot and character development, but the stylish violence still kept me plenty entertained.” Unfortunately I still need more than this. Not much more, as my review of Tron: Legacy attests to (sometimes loud soundtrack and imaginative visuals are enough) but more than just an extended trailer for 3D playback, only here presented in 2D. Even compared to Machete, this one is both too silly and too flimsy for words.

If you really don’t mind your actioners to be loud, in-your-face, and totally dumb, then Drive Angry is for you. But even with a fair amount of alcohol and/or popcorn, I suspect, for most people, this one will still be quite a vapid experience. You’ve been cautioned.