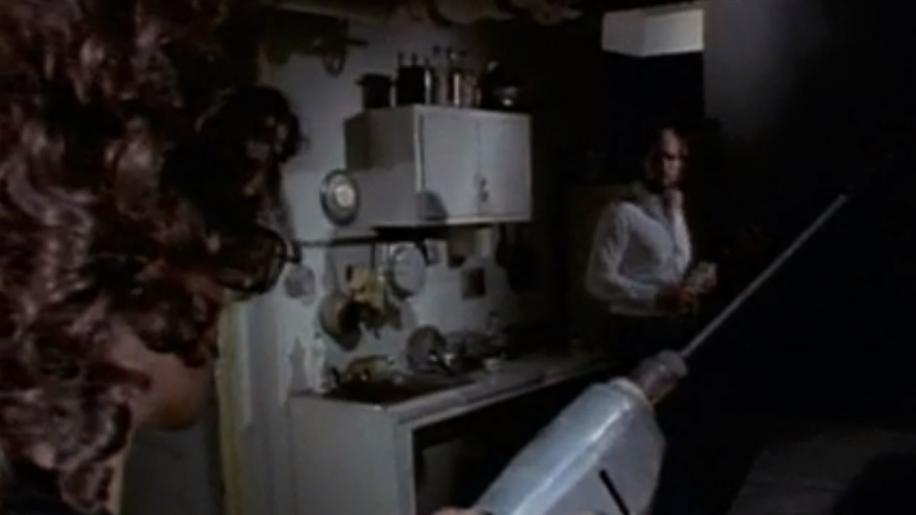 “Long available in incomplete or full screen editions, Abel Ferrara's 1979 cult classic The Driller Killer here receives its definitive presentation...”. So touts the limited to 10,000 DVD's rear cover. I'm so pleased I received the “definitive presentation” - god only knows how I'd have regarded an even poorer quality release! Despite the promise of a widescreen presentation, please don't be fooled into using the widescreen option of your TV/monitor... this is a non-anamorphic widescreen image requiring a 4:3 setting to view the image in its correct ratio. Although vastly improving on my first acquaintance with The Driller Killer, some twenty-one years ago - the image here is still full of scratches and nicks throughout. Vertical scan lines are visible at times, but considering the likely condition of the original film stock I'm quite surprised that picture quality is this good! Colours are drab and dull, and at times there appears to be a smear right smack bang in the middle of the camera lens... which certainly doesn't help matters.

But perhaps I'm missing the point! If this is as good as it gets for this movie, then I'm sure Driller Killer fans will be impressed with what has been achieved here, and non-anamorphic issues aside, the image is certainly not the worst DVD has to offer. No miraculous Dolby Digital 5.1 transformation here, I'm afraid - we're left with a mono soundtrack that, despite the advice at the very beginning of the movie that it's best to turn the volume up loud, doing so merely brings to the fore the simplistic nature of the included audio track. The best way I can think of to describe the audio experience is to say that it always seemed that I was listening to the DVD from another room.

Having said that, I was impressed with just what can be achieved with a mono soundtrack! Dialogue is always reasonably coherent and there is quite an “expansive” quality to what's on offer here, but like the image and the movie itself - the included audio track simply reflects the age of the movie, and its humble beginnings. Disc one has the director's commentary - I preferred the second viewing of the movie with Ferrara's insights turned on, despite his slightly weird delivery. Ferrara is nothing if not “laid back”! Up next is a trailer for the movie, which certainly makes one appreciate the effort that has gone in to the restoration of the movie itself, especially in the sound department! Bringing up the rear of supplemental features on disc one is my favourite... the Porto-pack Commercial. Learn how it was possible for a guy to scour the streets of New York in search of his next holey human drill cushion - remember, this was filmed at a time long before cordless drills made such activity a mere walk in the park!

The bulk of disc two is made up of three of Abel Ferrara's early short films. Suffice to say he has a laconic tone, and listening to the director's commentaries - slurred voice and all - with each short was a difficult task for me. The movies themselves are old and blurry; Could This Be Love is in colour, whilst The Hold Up and the silent Nicky's Film are shot in black and white. Only the first two have commentaries.

If you're an Abel Ferrara fan then these supplemental features are sure to be of interest. For this reviewer... well, I'd rather be forced to watch... just about anything but this tosh. It's The Driller Killer and twenty one years between viewings hasn't improved the movie going experience for this DVD reviewer - for me it's old hat. One for the die hard fan only.